Save those beans for a rainy day 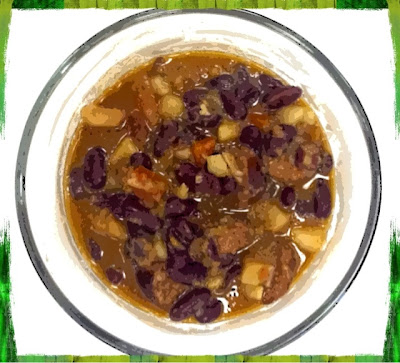 Yeah... It's raining... Again... Last summer was dry as hell, so apparently the universe is playing at "making amends" by sending us some extra rain this year. I mean, really? At this rate we will soon be calling global warming “global wetting” to be describe this pain in the... Out control, this rain keeps falling down totally out of control. Rants and semantics apart, I must admit there is something about rainy days that wakes up the cravings in me, and, no matter how hot it is, it makes me long for that warmth feeling inside that only certain foods can provide.

Back in my hometown, where we have a semi-arid tropical climate, we start craving "rain-food" after the first signs of a thunderstorm, or any rain for that matter, because we need something to warm us up during those 78F "cold days". Our favorite under-the-rain go-to dish is the funche. Funche is a corn porridge, similar to polenta, but much crumblier.  It is part of our regional heritage since we can trace its roots back to Northern Angola (home to a large number of the slaves forced to work in the region's plantations) where a similar dish is called funge. We normally eat it in three combinations; all of them calling for liquid of some sort, since the funche crumbles are kind of "dry" in the inside. Kids normally eat it with milk, the same way you would eat cereal. The most common way is probably to eat it is with "stewed" codfish, and even though I barely tolerate eating fish, I have to admit it is delicious. Finally there's my favorite way of eating it: topping it with stewed beans. Now, that's just heaven, but it's also surprising. For someone who has always enjoyed variety in his food, to crave beans in those days was madness, considering we ate beans at home every single day. But what can I say? I like my beans.

Now that it's been raining for days (actually, for weeks) in Cleveland, I started craving "rain-food" again. I don't really feel like having the funche itself, as much as I love it. I felt like eating the beans instead. I wanted a soup and I wanted the beans; so I made a bean soup. Simple; it's not HIV science (which reminds me I gotta go to work soon).

I started by making a sofrito, the Puerto Rican cooking base. I took out my mini chopper and almost pureed an onion, a green pepper, three cloves of garlic, and a touch of olive oil. I saved it so it would be ready to be used a few minutes later. I cooked two chorizo sausage links in olive oil, and removed them from the heat. They were covered with foil to keep them hot, and cooking. The pan was feeling hot and lonely so I added the sofrito and cooked for a few minutes and then added chili sauce to spice things up. Then I added cubed carrots and cubed red potatoes, and to give my bean soup some more depth I added red wine and let them party on for a few minutes. I seasoned with salt, pepper, cumin and Spanish paprika. The beans went in, and then I sliced the chorizo and added it too. Thank God nobody was actually looking at my face when I was making this soup. My pleasure face would have certainly made it into the food-porn section of the internet. In my defense, I wasn't faking any of it. Oh yes... It was great. After enjoying all those smells, I added chicken stock to seal the deal, and I left it simmering for an hour. Listo. Now it was time for a very cold shower.

When I came back I had a very nice, decadent tasting soup. It had the boldness of a spicy soup because of the sausage and its paprika, but it wasn't hot per se. The carrots added a somewhat sweet, balancing flavor, and the potatoes played their role releasing starch, giving the soup body without having to add flour. The only tragedy of the process was my inability to take a picture that really attested to the humbleness, still rich flavors of this soup. Mea culpa, mea culpa.

Not only the soup was great in flavors, but it was definitely a winner in the calorie and nutrition department. It was about 500 calories, with about 18 grams of protein. There were all the nutritional benefits of the vegetables, the roots and the beans in the soup. There is also a bit of fat via the chorizo. Still, with just about 500 calories, all the other good components, and the happiness it brought me, I would not consider this soup a cheat meal, but a good friend. And as a good friend, it made me feel warm in the inside and gave me comfort through those rainy and stormy days.

And as I finished writing about rain and food, the sun came out. Was it the soup?

Purée the ingredients in a mini chopper, food processor or blender. Save it to use it later. 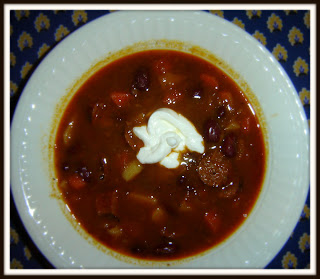