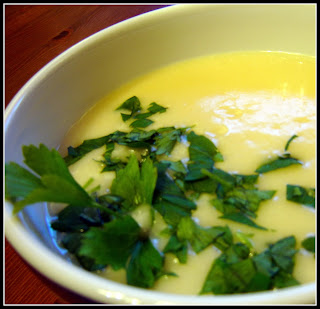 I’m really happy to say that though I’ve had my share of stress recently, I’ve successfully managed to accommodate pockets of really awesome moments that I’ve spent with some of my closest friends and family. Dinners, drinks, shows, or just some simple quality time, have kept me sane, and have managed to keep my social skills somewhat sharp and working. You would not believe the amount of extremely smart people I’ve met throughout the years who are just not capable of behaving properly in public, and even worse, they manage to somehow wear their bad manners and tasteless personas as honor badges wherever they go, expecting people to actually respect them for it. I'm like: "Sure, you are a jerk, you don't know how to eat, you smell bad and you have no etiquette, no common sense and no common courtesy; I think we owe you a Nobel Prize or something… not". Come on, man, get a grip. Anyway, to prevent me from heading in that awful direction, I strongly believe that it is imperative to make time to enjoy real life, with real people, outside of our specialized, technical and unfortunately too cultural-loose working environment.

If unplanned, going out to dinner could result in me not using some fresh ingredients for a few days, thus increasing their chances of going bad before I get a chance to cook them. Oh, who am I kidding? The real problem is that I’m driven to overbuy produce once in a while by the good prices and the high quality of the veggies at my local market. To make things worse, if I don’t shop with a shopping list (which I never do) I may forget and either re-buy something I already have or I'll  buy too much of something new. Forgetting what I have is a little too easy mostly because I store them in the fridge's drawers and I just can’t see them all the time. Cheese and cold cuts also go in drawers, and hence can go in the forgotten category as well. I hate it when food goes bad in the fridge, and I’m done letting food go bad. 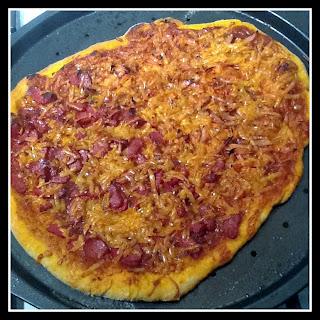 During different dinners last week, I used several “endangered” items before they would go bad and die on me. I started by making pizza to use some cold cuts as toppings before they expired. It was a real experiment in recycling (food). I made the dough from scratch but instead of making a tomato sauce (or using a canned one) I used the leftover sauce from a sweet-and-spicy chicken we made a few days before. Half the pizza was topped with salami and the other (healthier) half with turkey breast. I added Gruyere cheese and baked that puppy. Bam! Pizza for dinner, for the price of nothing (not that pizza is expensive to begin with) and with great control over calories and nutritional components. My turkey half was amazingly good, and around the 500 calorie mark for the whole thing. The salami half was closer to 700 hundred calories, not bad at all for such a big portion. 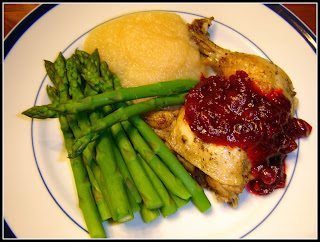 A few days later, I decided I need to cook the asparagus and cranberries before they would go bad. To be honest, the asparagus was bought just two days before, but I was afraid of leaving them in the fridge and forgetting about them, mostly because they were freshly picked (according to the farmer’s market.)  I had leftover braised chicken quarters from the day before, so I thought I could reuse them (by just reheating them.)  I made a cranberry sauce (with bourbon and orange liqueur) to pour over the chicken. Then I just blanched the asparagus for a bit over a minute, and served with canned (yes, canned) applesauce.  I only had two words to describe it: Too Good! 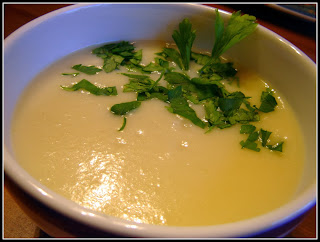 Last but not least, I made the dish I’ll be sharing with you today. I buy 2-3 leeks almost every week, and when I looked in the fridge I noticed I had some leeks from the week before. Turns out I also had some week-old potatoes. Their time was finally up. I thought it would be only natural to make something out of the two ingredients combined, and the obvious candidate was a potato-leek soup. I’ve never made one before, but I reasoned that I had the 2 main ingredients I needed and there’s not much that could go wrong. I went ahead and sautéed the leeks in butter and oil, I added the potatoes, salt and a combination of chicken broth and chicken stock for about 30 minutes. During the last 10 minutes of simmering, I added lowfat sour cream to add extra creaminess and sour notes to the soup. Then I just transferred the soup to the blender and listo. I garnished the soup with parsley and digged in. It was creamy and rich, yet not heavy. The flavors were complex even though the ingredients were simple. I particularly loved the sour and almost acidic notes from the sour cream. I'm proud of this delicious, yet inexpensive soup! Cheers!

2 teaspoons vegetable oil (I used grapeseed oil)
1 teaspoon butter
2 leeks
5 medium sized red potatoes
4 cups chicken broth
2 cups chicken stock
Salt (to taste)
½ cup lowfat sour cream
Prep the ingredients
Wash the leeks very well (take into account that dirt sometimes gets trapped between the layers). Discard the upper green portion (where the leaves start to separate as individual leaves). Cut them lengthwise in half, and then chop them (about ¼ inch).
Peel the potatoes, cut them in half, and then into 1 inch cubes.
Heat up the chicken broth and chicken stock.

Heat the oil and butter in a stockpot over medium or medium-high heat. Sautée the leeks in the butter and oil for about 7-10 minutes, turning them often to keep them coated in the oils.
Add the potatoes, a pinch of salt and a combination of hot chicken broth and chicken stock. Simmer covered for about 30 minutes.
During the last 10 minutes of simmering, add the lowfat sour cream.
Transfer as two batches to a blender (or use an immersion blender) and puree the soup. Taste and decide if more salt is needed. Serve hot and garnish as desired.