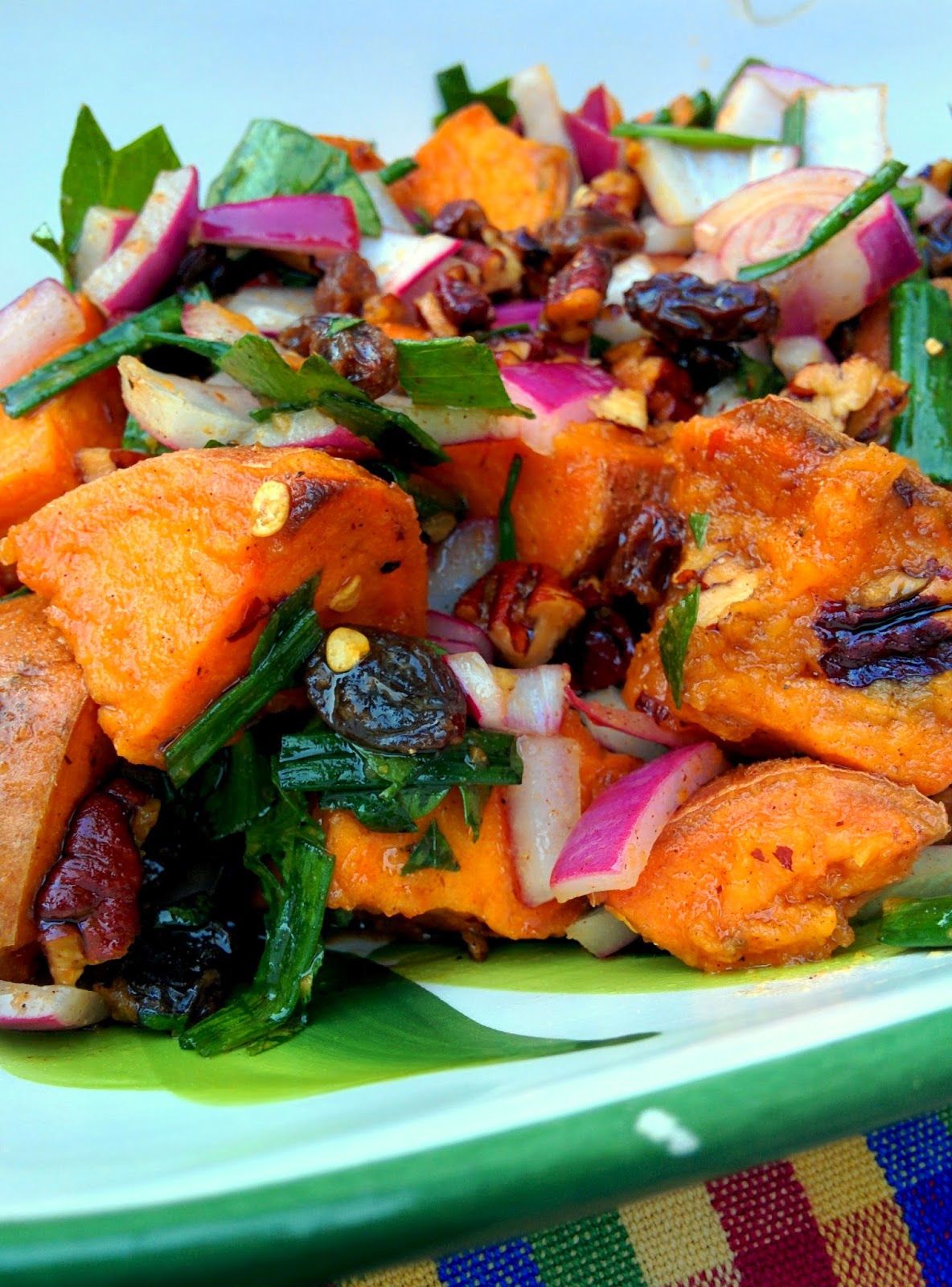 The last couple of weeks have been CHAOS!!! Ok, chaos may be somewhat of an overstatement, but it certainly has been stressful (now an understatement). We’ve had people doing work around the house…  You can probably guess where this is going, but I’ll still give you a quick description of where the stress comes from. The workers arrive at 8 am, so you need to either be gone to work by then, or you better plan on staying out of their way. They’re nice people doing hard work, so you have to work very hard at choosing your words when you are voicing your concerns. And of course, you have to go behind them fixing, or at least trying to fix, all of the things they break along the way. That’s actually quite some work, but unlike them, I’m not getting paid to do it. But like they say back home “There’s no evil that lasts 100 years, nor a body that can survive it”, so I’m glad it’s almost over. We all know it wouldn’t take the project 100 years to take me to my grave; an extra couple of weeks would do the trick. 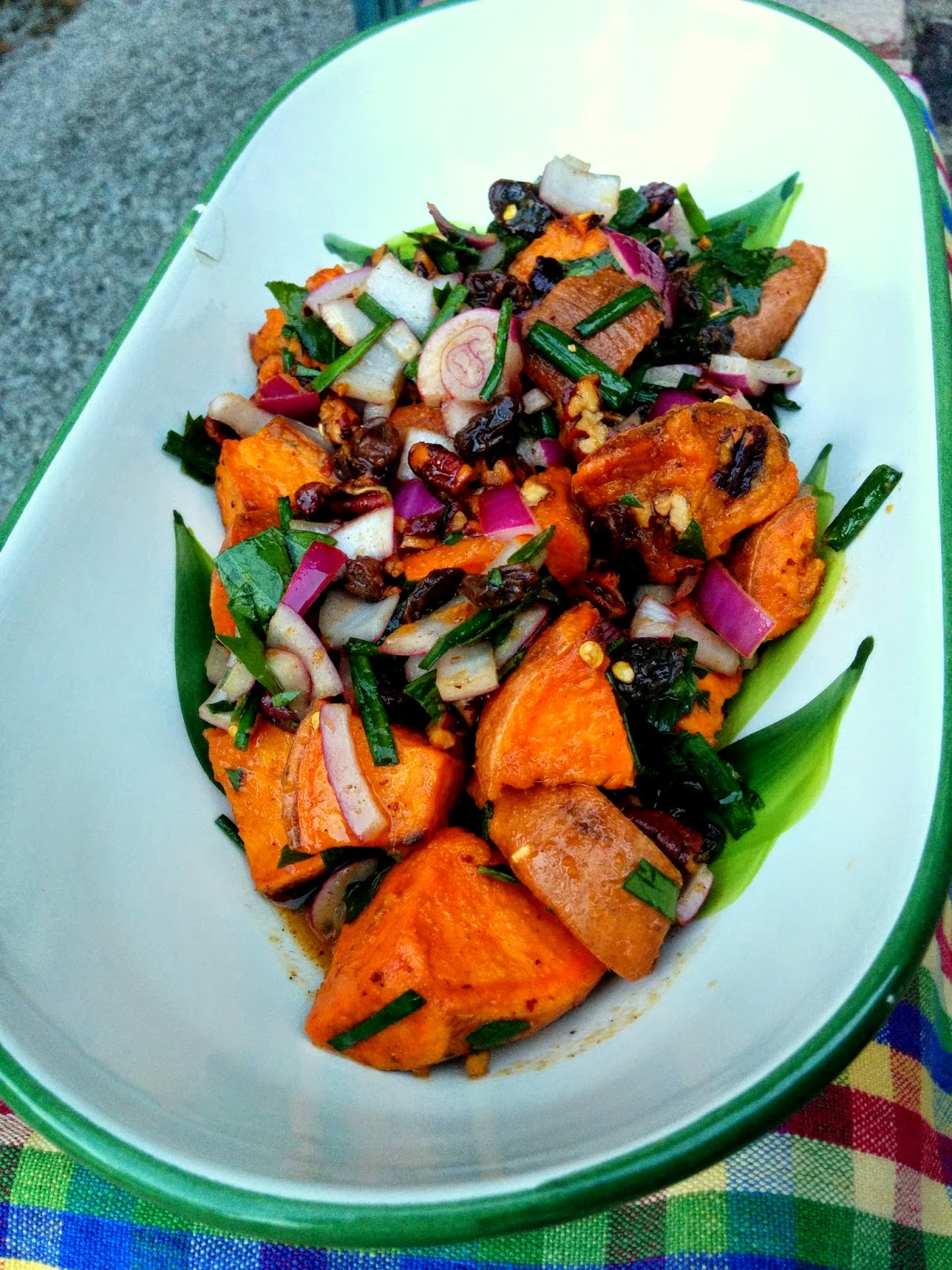 I did have my share of drinks through the whole process, and they got me through it. Two sets of friends got married as this madness was going on, so I had two weddings to celebrate (and to drink away my stress). The two ceremonies were very different, but they were both absolutely beautiful, and the venues were just gorgeous. I had good food with good friends, so I had the best of breaks from all the chaos. I may have eaten more than I should, but hey, you can’t measure your buddies’ happiness in calories (nor your sanity in drinks), so I “partied”. 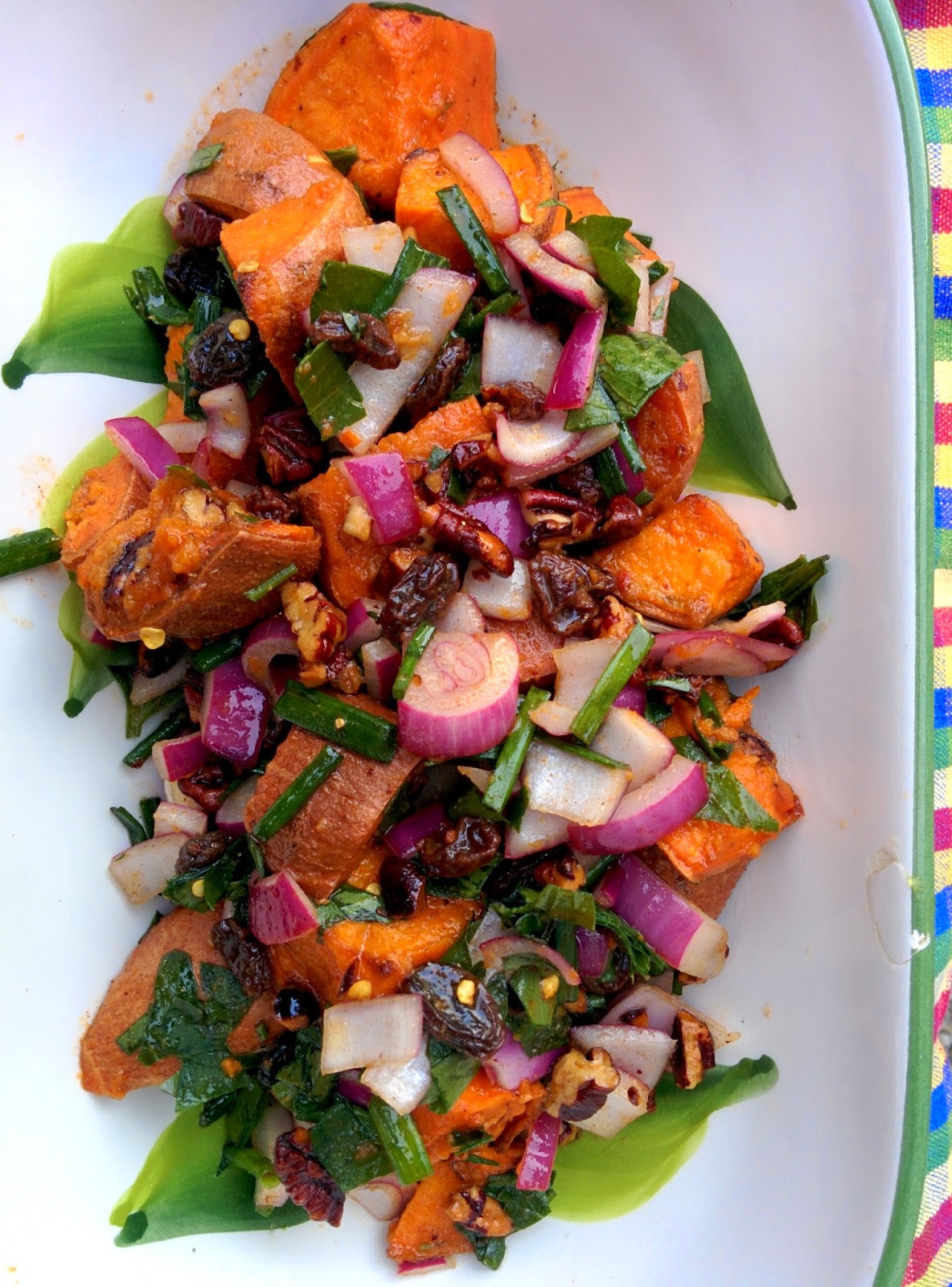 But the last two weeks have not been just me pigging my problems away. I’ve had my share of exercise - some of it reflected on my “Cleveland’s my gym” posts. I’ve been going to the gym 4 days a week, I’ve been commuting by bike and I’ve been running 5K twice a week. On that note, I won a free registration for a 5K race on a giveaway from one of my favorite local blogs –Poise in Parma. This will be my first race, so I’m excited. Maybe I’m a little too excited. I’ve been driving people INSANE talking about the race, and asking for advice. I’m just pumped! BTW, anyone has good training tips for races? 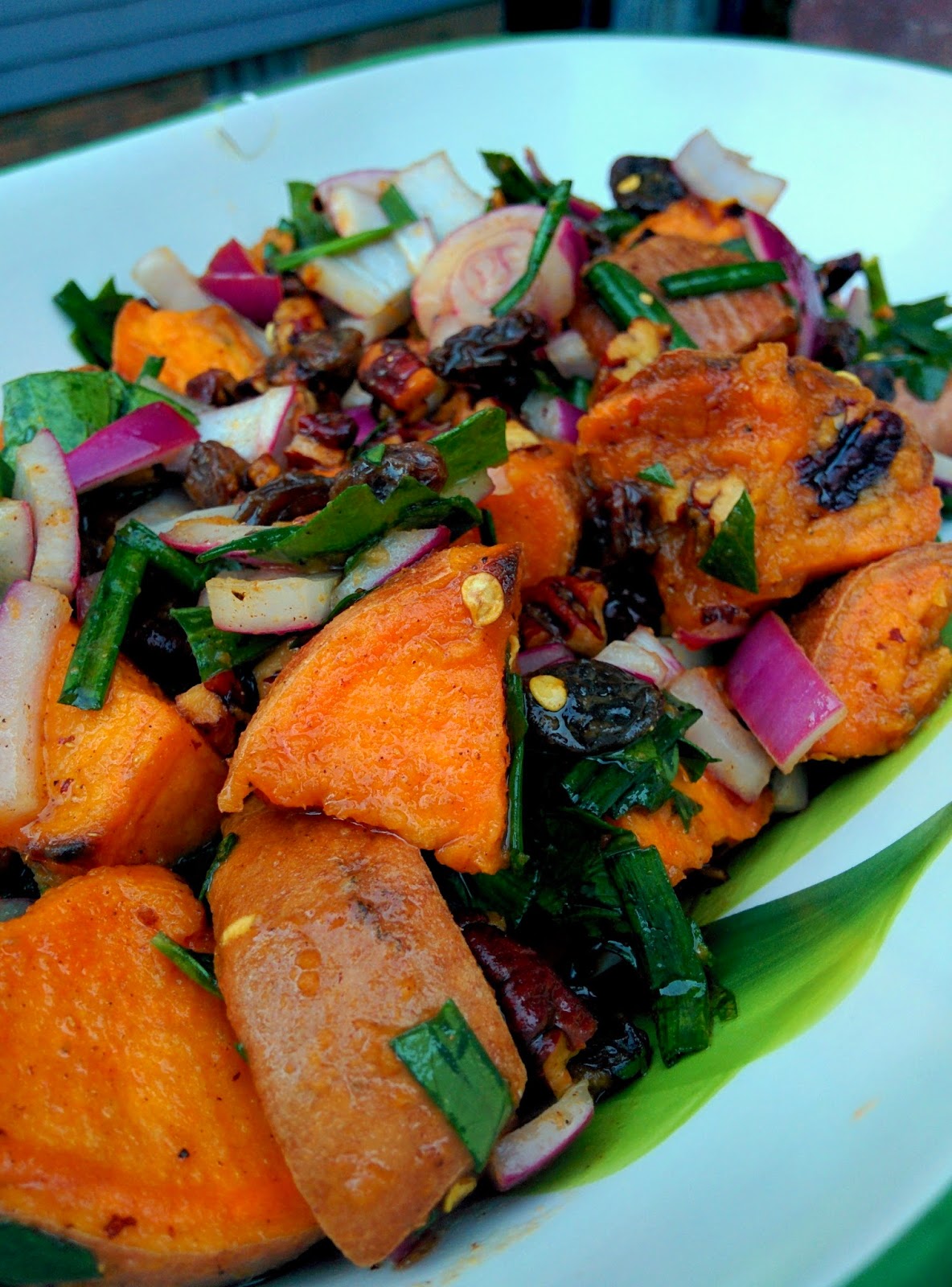 I’m back to normal now (or at least close to), so I’m back on track cooking and blogging about it. I made this beautiful dish that I absolutely HAVE to share with you: roasted sweet potato with pecan and maple. I adapted it from Yotam Ottolenghi’s cookbook – Ottolenghi, The cookbook – and he in turn adapted it from the website Epicurious. It’s technically a warm sweet potato salad, dressed with maple and other goodies. It is absolutely delicious, and like all great recipes, there’s room for your interpretation, so it can be adapted to work with the ingredients you have. I substituted lovage (which I’ve featured on another post) for cilantro and parsley and I made a few other changes from the original(s), and the result was a damn good dish. I’ll share my version! 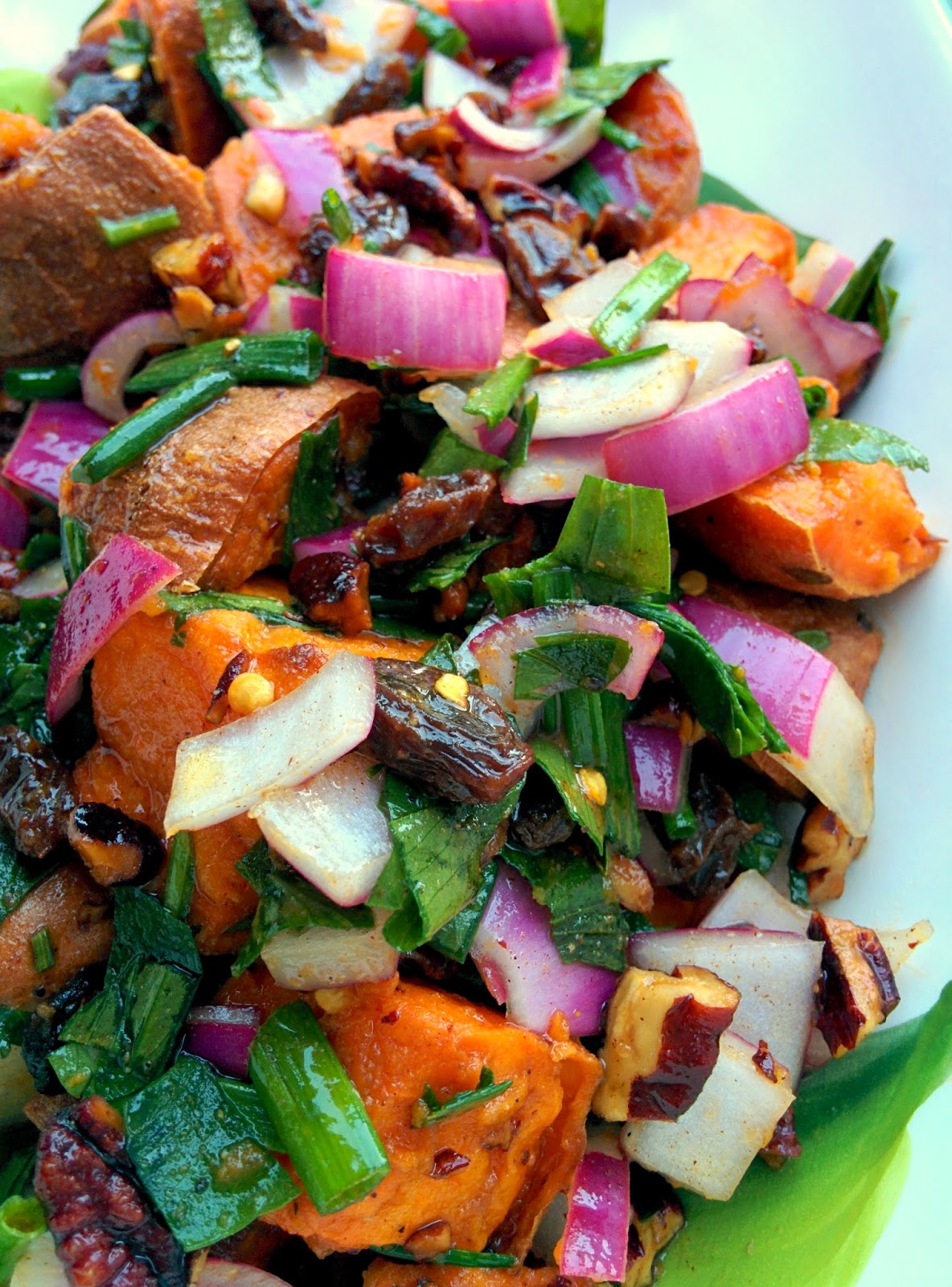 
1.      Preheat the oven to 375 F.
2.      Cut the unpeeled sweet potatoes into 2 3/4 inch wedges. Spread them out on a baking dish and drizzle with the olive oil. Sprinkle with some salt and pepper, mix well with your hands and then roast in the oven for about 30 minutes.
3.      On a separate baking sheet, toast the pecans for 5 minutes. Remove from the oven and chop roughly.
4.      While waiting for the sweet potatoes, make the dressing. Whisk together all the ingredients in a small bowl with some salt and pepper. Taste and adjust the seasoning, if necessary.
5.      When the potatoes are ready, transfer them to a large bowl while still hot. Add the red onions, lovage, chives, chili flakes, pecans and raisins. Pour the dressing over and toss gently to blend, then season to taste. Serve at once or at room temperature.