The hot chick with the blue ribbons

One of the best qualities of summertime, the longer days, brings great opportunities to finally finish all the home projects that have been waiting all year round. Indeed, we have dedicated the last couple of summers almost exclusively to home projects, but this year we've had the chance to cash in the summer fun (you know, when is not raining, what the hell?) and we've been able to enjoy ourselves. We've spent time with our friends, we've done our share of grilling, and we've done some partying here and there. But of course, one still has to keep up with home stuff, especially if you are borderline OCD like me (yes, everyone knows about my dirty laundry-folding habits). While giving the house some general TLC I noticed that our book collection has grown like crazy during the last few years (and it's certainly doing better than my flowers and without any watering). All those books contain all these great recipes but they're just being ignored, the way I ignored the treadmill for so many years (and we all know how that one ended). I decided to make an effort to make more and more of those recipes.

I decided to start with one of my favorite dishes, turned healthy. I went ahead and picked up one of my favorite books, "Now eat this!" by Rocco Dispirito and flipped the pages until I finally found his version of chicken cordon bleu. This is a dish of American origin (no, it didn't come from France), created sometime during the 1940s, and it was very popular in the 80s and 90s when I was still a kid (I still get carded when I go to bars, just so you know). Cordon bleu translates to "blue ribbons". Blue ribbons used to be associated with a high order of knights in France (L'Ordre des Chevaliers du Saint-Espirit); very prestigious guys. The association stuck around almost synonymous with prestige, and when referencing the dish, it probably just references that it's a "prestigious" or "fancy" dish, just like with the famous food academy. One of the close relatives of the chicken cordon bleu is the traditional Swiss dish made from a veal fillet used to wrap ham and Gruyere cheese, battered and fried. In that part of the world the breaded veal, pork and chicken fillets are very popular (schnitzels), so all they had to do was to add the ham and cheese, and wrap it (now suddenly KFC's chicken - ham and cheese- chicken sandwich with no bread doesn't seem that crazy any more, just nasty). There's also an Ukrainian dish, "Chicken Kiev", which is made from a thin chicken fillet, it gets stuffed with butter, rolled, breaded and fried, is also a likely influence in the development of the chicken cordon bleu.

I love chicken cordon bleu. My mom went through a short phase of making those often when we were kids (although I have reasons to suspect she bought them frozen, they were very good). Suddenly she stopped making them, and never made them since. I have to say that as a cordon blue expert (do not mess with me, sista), this recipe is amazing. All the flavor is there; I knew that from the get go since I had it before, but I've never made it myself. I feel like everyone should now this recipe, and since I found out Mr. Dispirito has published online as well, I figured I wouldn't be sued for sharing it with you.

Rocco's recipe is beyond amazing. It has 4 times less calories (4-fold less, for my scientist friends), and 12 times less fat than the regular cordon bleu. That means that a serving (4 ounce boneless chicken breast) is only 333 calories (it's kinda scary how precise he gets), 6.6 g of fat, 43 g of protein (my guns are already thanking me for it) and 24 grams of carbs, 3 of them of fiber. The only catch is that you need to start 2 hours ahead you want to cook, because the cheese sauce takes about 2 hours to freeze, but if you do it the day before, you're all set! 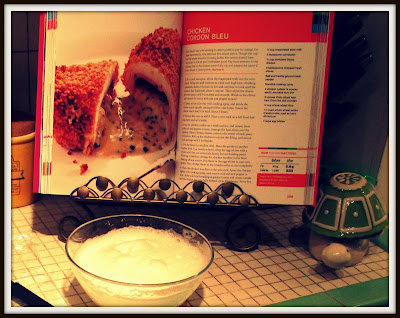 Act I - Prepping the cheese sauce
1. In a small sauce pan, whisk the evaporated milk (constantly) into the cornstarch until it boils. Reduce the heat to low and cook for a minute to thicken it.
2. Whisk the cheese into the sauce, until is melted and smooth.
3. Whisk in the chives and season with salt and pepper to taste (about 3/4 teaspoons each to me).
4. Spray an ice cube tray with cooking spray (you'll need 8 of the spaces)
5. Split the sauce into 8 of the cube holes.
6. Freeze until the sauce is hard (2 hrs). (I did it overnight, so I covered the ice tray with Saran Wrap to prevent "freezer smell"). 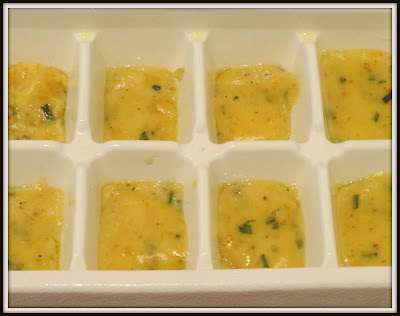 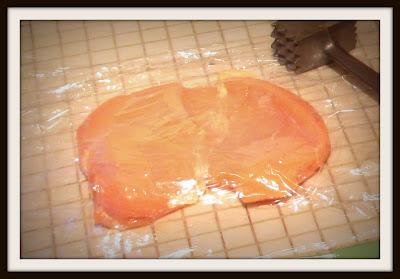 1. Preheat the oven at 450F. The chicken will be cooked on a roasting wire rack, so to minimize the mess, place it under a foil-lined baking sheet, or roasting tray.
2. Prepare the breading station. You'll need the breadcrumbs and the flour each on a shallow dish, and you'll need the egg whites in a medium bowl.
3. Season the chicken with salt and pepper to taste (I used about 2 teaspoons of salt and 1 of pepper across divided among all the cutlets).
4. Line the chicken with the ham.
5. Place 2 sauce cubes per chicken cutlet.
6. Roll up the chicken to encase the filling. Secure with toothpicks.
At this point some of my rolled chicken cutlets were not looking pretty, and God knows I was annoyed and angry Spanish was used. However, they were gorgeous at the end, so have patience. (Note that that's a note for myself in the future.)
7. Dredge the chicken in the flour, shaking the excess. Then dip them in the eggs to coat them completely. Dredge now on the breadcrumbs to coat completely. Do this for every cutlet.
8. Place the chicken on the wire rack.
9. Spray the chicken with cooking oil (lightly).
10. Season with salt and pepper to taste (I didn't).
11. Bake until breading is golden brown and cheese is fully melted (25-30 minutes). 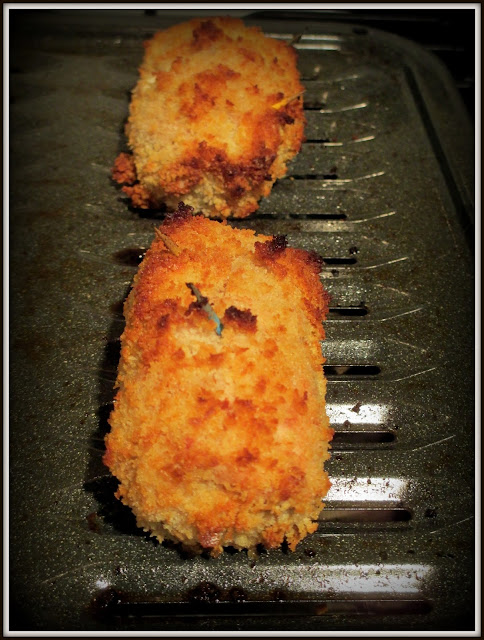 I don't know if it's because I'm a protein junkie, but this dish was so satisfying! I was a bit skeptical on the serving size since the rolls seemed a bit small, but I was done after one serving (although based on the flavor I was tempted to go on). The chicken cordon bleu looked so beautiful, and like I said the flavor was amazing. You don't really miss all the butter missing from the original recipe. I think the Gruyere cheese worked so well in this recipe that I might always do it that way. 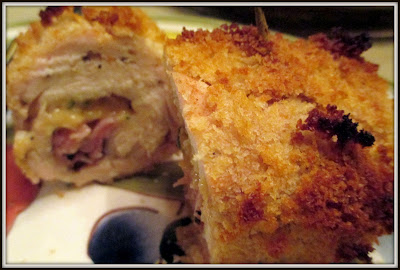 As a quick, yet delicious side, I boiled pasta in salty water until it was al dente, drained it, and dressed it with butter, garlic and chives. This came mostly as a realization that I hadn't even thought of a side when I only had 10 minutes till the cordon bleu would be ready. Still, it worked really well. It was a simple, yet good pairing to this dish. A side of quinoa, rice, sweet potatoes or mashed potatoes would go well with the chicken too. A glass of Bordeaux or tempranillo couldn't hurt either... Still, if you want to keep the calories low, skip the wine and go for a side of steam veggies instead. They will be delicious and will go well as well! 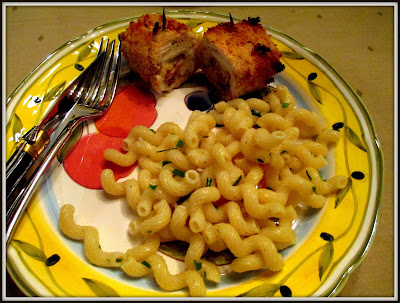 Note: The history of cordon bleu was based on a quick review from a fellow internet user (http://answers.yahoo.com/question/index?qid=20071211123944AAALlp9) who actually used books for references!
Posted by Angel at 5:12 PM