After making those delicious Romanian sausages last week, mititei (Be not afraid, little ones), I was on a roll, and I was left wanting some serious street fare, Puerto Rican street fare this time. One has to represent, you know? The most popular street food back home are the "frituras" (fried ones), which are actually different dishes, that just happened to have the deep fryer in common. To an international audience the "pastelillos" or "empanadillas" (small empanadas or turnovers) might seem familiar. Those can be made from a wide variety of fillings, but the most common ones are ground pork, ground beef, and "pizza" (tomato sauce and mozarella cheese). But of the frituras, my favorite ones have always been the "rellenos". Rellenos (stuffed ones) are made of a starch stuffed with ground beef or pork. The most common rellenos are the "rellenos de papa" (potatoes), and in a distant second place the "rellenos de pana" (breadfruit - if you don't know what this is, you have really been missing out on life, my friend). For both of them a purée is made, then they're shaped into a ball the size of a tennis ball, they get stuffed with meat, and finally they get deep fried. They are beautiful. They have a nice golden color, a somewhat crisp exterior, a soft consistency (even though they hold their shape), an amazing texture and a flavor to kill for. This week I wanted to eat a relleno, but I didn't want to drive all the way to the Puerto Rican neiborhoods to buy them, and I could certintly do withouth the calories that come from them. It was time for a plan B (which since I'm a little selfcentered I call plan A - plan Angel).

Like most Puerto Ricans, I'm not a big potato eater. Not to throw shade on all the potato lovers out there, but if you close your eyes and pick at random any of the other roots we eat in the Caribbean, chances are that the one you select will taste better than a potato. Please, don't blame me; I don't make the rules, that's just the way it is. So back home, potatoes are mostly used as ingredients for soups and stews, mostly to thicken them with their released starch. The relleno de papa is one of the few dishes that actually highlights potatoes in our cusine. But when it was time for me to make the rellenos, I realized that the potatoes we had were already called for by another dish we were planning on making. I decided to switch and use sweet potatoes instead, and stuff those. It would just take a few adjustement to really seize the flavors of the sweet potatoes, but nothing complicated.

I started the process by cutting the sweet potatoes into 2 inch long cubes. I boiled them in slightly salty water (with the skin on) for half an hour. I quickly rinsed them with cold water, just so I could handle them for peeling, but making sure they were still hot. I added butter, salt, pepper, cinammon, orange peel and cardamon, and proceeded to mash them. I added 1 tablespoon of flour to the mash, and after flouring my hands, I mixed it in. I left my sweeties sit while I worked on the filling.

To stuff my sweet potatoes I had to make the "picadillo". Picadillo, means the "thinly cut one" (or ground meat) and it's the traditional stuffing for the rellenos. To make it, I heated a heavy skillet and added a few slices of bacon, and then ground pork. I seasoned the meat using salt, pepper, oregano, cumin, cilanto, achiote. As the meat browned I chopped manzanilla olives (olives stuffed with red peppers) and added them to the meat as well. Normally you would use an "alcaparrado" (which are olives and capers in a brine) to make the picadillo, but I have to admit that I just couldn't find it in the fridge fast enough so I gave up and went for the manzanilla olives. Regardless, about 10 minutes into it, the picadillo was ready. 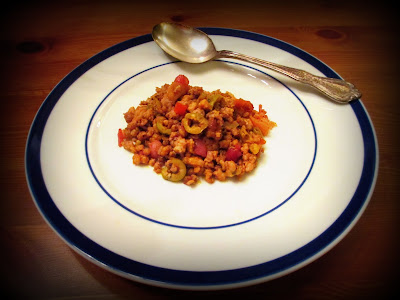 Time to stuff stuff. Once again I floured my hands and took my mashed sweet potatoes and split them into three. Why three? Well, I tried making them a bit smaller to make more of them but they were not looking "glorious" enough, so I went for a bigger size. Sometimes size does matter. I shaped them into balls (about the size of a softball) and then I pressed them in the center to make a dip. I added 2 tablespoons of the picadillo to each, and kept the leftovers for another day. Then I closed the dips by gently reshaping the sweet potatoes as a balls again, going from the bottom up, from all sides. I coated the sweet potato balls with some additional flour and baked them at 350 F for 40 minutes.
Oh, Lord have mercy!  I knew that they would be softer than the original version because they were one, bigger; and two, baked instead of deep fried. But it wasn't bad at all; they held their shape very well. Once I tried them they were so good that all I could think was "why the hell don't they sell these on the streets?". The spices really brought out the rich, sweet taste of the sweet potatoes, and the juices from the meat infused the with additional layers of flavor. They were really, really good.  I estimated these rellenos to be around 450 calories, so it was perfect for a light dinner, plus it leaves you room for a salad (and a possibly a cerveza). 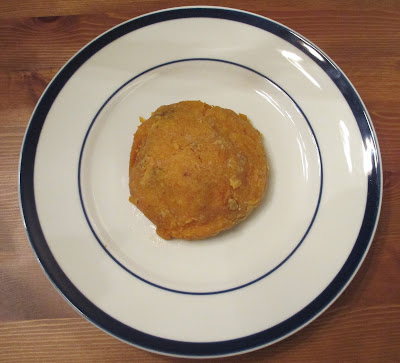 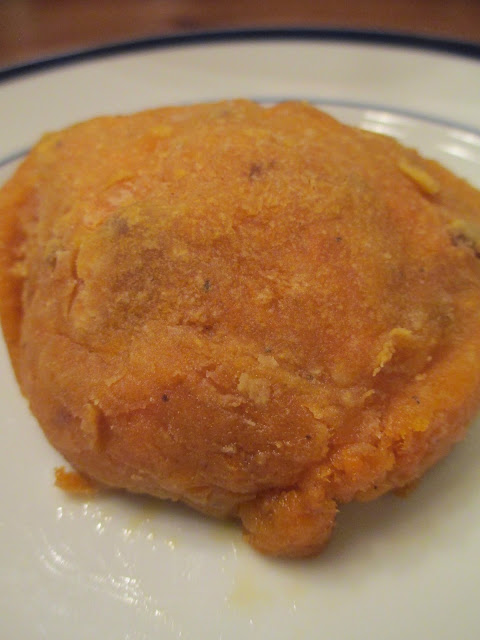