On the many ways to take a leek...


It has been a hot spring and it seems like the summer will be a steamy one. Oh, and the temperature will probably be hot too (I couldn't resist it... too many Cougar Town episodes wrapped around my brain). But seriously, there are days when the house gets so hot that the thought of baking or roasting seems masochistic at its core. In those days, my thoughts shift towards eating out and drinking ungodly amounts of beer; if not for the food and booze, at least for the very effective relief from the heat, courtesy of the arctic-set air conditioning. Unfortunately, my belly and my wallet were not willing to put up with these desires any longer so I had to find ways of staying on my calorie budget, but keeping the house's temperature as undisturbed as possible. Salads and cold soups are good at keeping my chill but I'm a meat eater; there's that. Sandwiches won't cut it for diner and the slow cooker is too fall-ish to do it often during the summer. So by elimination, the grill and I became good friends (I guess I'm not too friendly...).

I've been feeling like eating leeks lately. I love leeks. They just have this mild, oniony taste that I love. Normally I use leeks either as a base to make soups or I sauté and serve them next to meat. However, I felt I should be more "adventurous" while cooking my leeks this time. I concluded that I could use the leeks to make some healthy burgers. Trust me; you don't want to even attempt to comprehend the thought process I went through to decide what to make...

I started by selecting the meat. I decided to go for ground round, or 90% lean beef. I know, for someone who still needs to drop a few pounds, that is quite a bold move... However, when you are making a burger, using less fat than that will result in something you will have to talk yourself into eating, and can probably be used for self defense. A bit of the fat will drip as you grill anyway... I seasoned the beef with salt and pepper, and added a finely diced small onion and 2 cubed jalapeño peppers - seeded and deveined. Both would add juiciness to the meat, and layers of flavors, but won't be dominant.

Then, I took a leek (lol) and finely diced the root and "stem". The leeks don't really have stems, but an aggregation of leaves that have the structural function of a stem. Some people use the upper part of the leaves (the part that actually looks like a leaf) in their cooking, but to me they add a somewhat earthy flavor I normally don't want (plus, there is actual dirt there that you'll have to clean much more thoroughly). The leeks in this burger will add flavor, juiciness and nutrition, so get ready for some serious B-vitamin intake (1, 2, 3, 5, 6, 9), and manganese (among many others). They will also add yet another layer of flavor that won't be dominant, but will add more complexity to the taste, making it deeper that what you might expect. I shaped one pound of beef, with all the goodies, into 4 quarter-pounders. I grilled them until medium well and toasted some buns I had (which were not whole wheat, even though that would have been better). I used about an ounce of reduced fat cheddar (a slice) to finish up my burger.

I still had 2 leeks left so I decided to make a side dish of my almost-staple sautéed leeks. But in the spirit of keeping the stove off, I decided to make them in the grill's side burner. I added about 2 tablespoons of olive oil to a heated skillet, and after a minute I added the sliced leeks and a sliced small onion. I cooked them until they were soft, about 10 minutes. During the last minute I crushed a clove of garlic into the pan, and then removed it from the heat. The smells were so good... Burgers and sautéed leeks with garlic... OMG. I was a bit greedy and did not stop there. I also made a very simple salad, using a small head of red lettuce, and 2 big tomatoes. The dressing was made of 1 tablespoon of olive oil and like 4 tablespoons of white balsamic vinegar, with some dried oregano and dried thyme, salt and pepper.

Once again, O...M...G... The burger was juicy and with a fairly complex flavor. It was like they were having their own little game of hide and seek; they just made you wonder what else was in there, because you just can't easily point to them and single them out. The sautéed leeks were AWESOME. I really don't know what I enjoyed more: their taste or their smell. Man, they were just beautiful. The side salad was a nice touch. It was refreshing, and an easy transition between burgers and leeks (since I just couldn't wait and have my salad first).

Finally, I decided to have some fun with my drinks as well. I made some grapefruit infused water to have some nice refreshing flavor without taking on calories, or synthetic components (I'm talking to you Cri$€£ Light and diet sodas). I also had some late harvest red wine, which normally taste sweeter than other wines, and gives me the feeling of having a light, drinkable dessert - even though it wasn't a dessert wine per se. I finally felt like it was spring in Cleveland, and not summer in the Caribbean.

The whole dinner had a tag price of around 650 calories, which was right on my calorie budget. The best part of this kind of meal is that it is easily adjustable to control a calorie budget. 150 calories would have been easily cut by just not having wine and another 60 or so could have been avoided by not using cheese. I just didn't have the heart to do either. It's not that I want to sound cheap, but the whole dinner was easy on the wallet as well since the whole dinner was under just $6.50 per person. Regardless of the calorie count, or the penny count, there was nutrition in abundance. There was plenty of protein, there was fiber, and there were many minerals and vitamins. An easy way to increase the fiber count would have been to exchange the buns from regular to whole wheat buns. Oh, well...my bad. It'll be the next time.

At the end of the day, I achieved all that I wanted. I had a meal that was delicious, healthy and nutritious. I sneaked in some vino, I got a break from the heat, and I used my beautiful leeks in two different ways. I enjoyed the cooking, the eating, and the long lasting feeling that I was getting healthier with every bite I took, and that is all that matters. ¡Buen provecho! 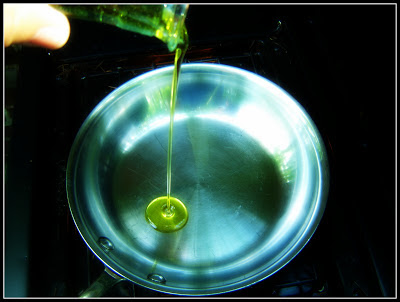 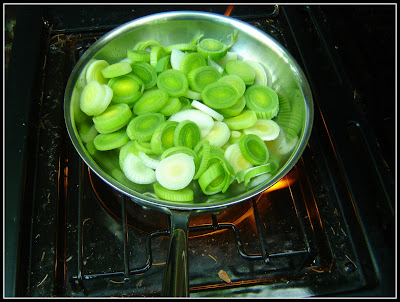 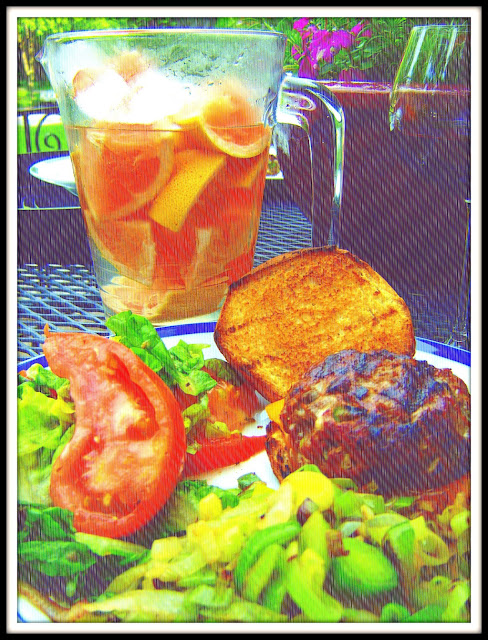