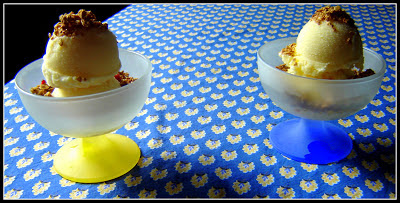 The heat is here. Man, is it possible for me to go to work, to watch TV at home, or let's say, walk outside in jeans without sweating? Is that too much to ask? Yes, yes it is. So, instead of whining and whining about it I decided to just deal with the damned heat. And I did it the only way I know how to: by making myself a refreshing, tasty and healthy treat (and by putting an AC unit in the window - you know it had to happen).

Back home in Puerto Rico, we have several treats to make us feel refreshed through the hot summer (and spring, and fall) days. Of course, beers and piña coladas do the trick, very effectively if you ask me. But there are other refreshments, that are non-alcoholic, and that bring out a smile in children and grown ups alike. The first one that comes to mind is called a "limber". The idea is to take your favorite juice or beverage, add sugar, and then you freeze it as a solid block (using a disposable cup). You just suck on it until it gets soft. When soft, you can bite into it. It is especially fun when it actually has fruits inside. Another traditional treat is the snow cone, which we call piragua (PIR, from piramide and AGUA - water). These ones used to be popular in public spaces or there would be a dude going around the neighborhood pushing his piragua cart. He, the piragüero, would shave or scrape the ice, and then he would add your favorite syrups for flavor. Then there were the sorbets. Those were usually awesome. Normally a guy would sell them on the street, pushing a cart with the containers. I loved those. They would usually have somewhat traditional flavors (coco, piña, acerola, parcha - read coconut, pineaple, Puerto Rican cherries, passion fruit, respectively) and they would always be inexpensive, as long as you were away from Old San Juan. And well, of course, we had ice cream.

Ice cream is so good, and so inexpensive in Puerto Rico that one would really be tempted to have one a day. For some reason I do not know, there are many local "parlors" owned by descendants of Chinese immigrants. But Chinese or not, the ice cream is great and a great way to deal with the heat. Limbers and ice cream both have a top selling flavor that I always considered my favorite: mantecado. Damn it, it's so good. Mantecado, is basically custard and just the thought of it makes me crave one of those now.

In order to keep my calorie intake low and to honor my new found love for frozen yogurt, I decided to take a mantecado recipe, and turn it into a delicious custard-froyo. So when my friend Jen wanted to know the recipe, I thought it would be a good chance to make it again, to kick the heat in the butt with with some froyo, and to share the recipe with her and everyone here. It's froyo time, y'all.

I used 5 cups of non-fat unflavored yogurt. I'm not gonna lie here. Fat really helps making your froyo smooth and it is how I made it in my original recipe. Fat helps because it prevents the formation of ice crystals, keeping your dessert creamier. Full fat yogurt and Greek yogurt work best for this recipe. However, I'm also a fan of turning it out, no matter of your starting point, so I went for it using what I had.

A great thing about this recipe is the fact that eggs are used, because they help maintain the creaminess of the yogurt, and the flavor they bring is great. So I added five beaten eggs to the yogurt, one cup of sugar, half a teaspoon of salt, one tablespoon of vanilla extract, and cooked it for 5 minutes in a double boiler. You want to stir constantly, so the eggs don't start cooking on the side of the bowl. Remember, you want a thin cream, not scrambled eggs, not flan. After 5 minutes you remove it from the heat you let it chill in the fridge until it is very cold (this may take a while...)  After that you can put it in the ice cream maker and follow your manufacturer's instructions. After my ice cream was ready, just for fun, I used some low fat granola to top it, and had it for breakfast.

This frozen yogurt is nice and tarty. Creamy and delicious. It is also refreshing and it strangely has some notes that reminds me of a lemon flavor. The one thing I don't like is that I used a "fancy" vanilla extract that keeps coming back to bite me in the ass. Every time I use it I get this aftertaste I don't like, but that I know it's from the damned vanilla. I'll send a note back to Madagascar to complain about it. Still, this froyo still rocks, especially calorie wise. Half a cup has about 200 calories, and when I added the granola, I still kept it under 250 calories. There's about 10g of protein to keep my muscles happy, and plenty of flavor to keep me happy. It's a win-win situation.

I used an ice cream maker to make this recipe. Of course, ice cream has existed long before ice cream makers and electricity existed, so there are several techniques you can follow to freeze your ice cream if you don't have an ice cream maker (5 ways of making ice cream-no machine required). But realistically, unless you can delegate this process to a hyperactive kid, you may want to stay away from shaking your custard by hand for half an hour. I think the best method is the one that takes the longest, but it requires less work (Custard-style ice cream making-machine free). Do not let summer get the best of you. Have some ice cream, frozen yogurt or frozen treat. It can be so satisfying to know that you made it, and you controlled the ingredients you are feeding your body with. Go ahead, give it a try. 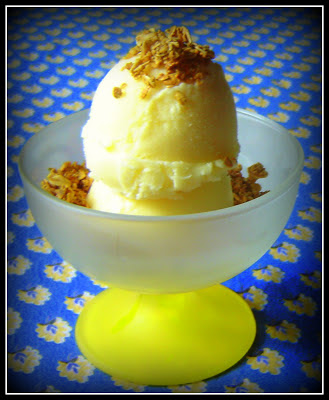 Mix the ingredients. Cook in a double boiler for about five minutes, stirring constantly. When you get a thin cream remove it from the heat and chill in the fridge. When it's very cold, proceed to make the ice cream following the manufacturer's instructions, or make it by hand.