Cranberry-apple pie with a crumble top 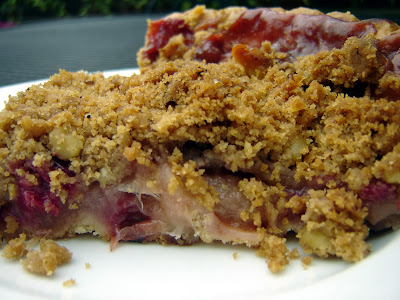 The last two weeks have marked the appearance of fresh cranberries at my local market. In all honesty, I've never been a fan of cranberries. For the longest time, they were almost impossible to find fresh, dried or frozen in the Puerto Rican supermarkets, which is not too surprising since we don't even have a word in Spanish for them. The surprising part was that you could find cranberry juice easily, everywhere. In all the years I lived in Puerto Rico, I never heard anyone say they loved cranberry juice. Still, many people drink a daily glass in hopes of preventing, or even curing, their UTIs, especially women (antibiotics, anyone?).


During my first Thanksgiving in Cleveland, I discovered "cranberry sauce". Let's just say it didn't quite rock my world, and it certainly did not leave me trembeling with pleasure. It did though, leave me with some confusion as I wasn’t exactly sure of what was it I was actually eating, since no sauce I had ever encountered had the consistency, and the taste, of jam. Of course, I quickly learned that what I ate was canned cranberry sauce, a common "shortcut" people take while prepping the Thanksgiving dinner, which I'll agree, it can be a bit overwhelming if you are not a hardcore Thanksgiving fan (such as myself). When you prepare the real thing though, and I mean when you actually make it from scratch and using fresh ingredients, the results are totally different, and the sauce is quite good (although I would personally called it cranberry preserves, lol).

Last year we made cranberry "sauce" for Thanksgiving (it was amazing), and somehow we ended up with some extra cranberries that were never used. I was decided to use them for something else, and ended up making a delicious French cranberry-apple pie. I'm not sure what makes the pie French (it's the streusel, Monsieur Self), but it was a great tasting pie. This pie is a single crust pie filled with apples and cranberries, and an amazing crumble top. The pie left me gagging, and I could not wait to find fresh cranberries this year and go for it again. I hope you like it! 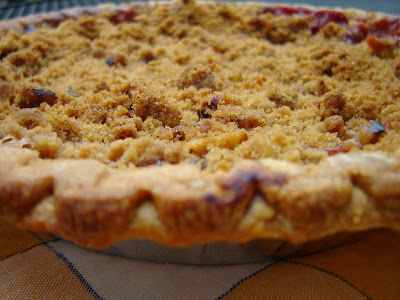 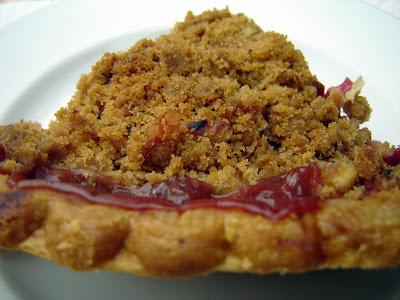 Adapted from Gourmet Magazine, November 2009 (by Gina Marie Miraglia Eriquez). Makes 2 pies. I bought my pie shells frozen, but leave me a comment if you want to know how to make it from scratch. 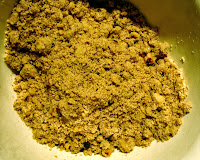 Stir together flour, brown sugar, cinnamon, and salt in a bowl. Blend in butter with your fingertips until large clumps form, then stir in pecans. Chill until ready to use. 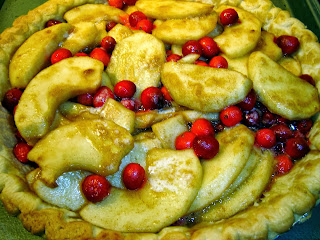 Preheat oven to 425°F with rack in lower third.

Split the fruit filling between the 2 pie shells and dot with butter. Loosely cover with foil and bake until apples droop slightly, about 30 minutes.

Reduce oven temperature to 375°F. Sprinkle crumble topping over filling and bake, uncovered, until crumble is browned, filling is bubbling, and apples are tender, 45 minutes to 1 hour more (mine are usually done after 45 minutes). Cool completely, 2 to 3 hours.
Posted by Angel at 2:17 PM