Four years ago we went to our friend's wedding, and even though it was just a two hour drive from home, we  stayed overnight. I don't know how many people traveled for this wedding, but of the ones who did, we may have been the luckiest ones. We were directed to stay at the Presidential Inn in Galion, OH, a cute bed & breakfast in a building that (I hear) used to be a hospital. Its claim to fame though, is that this farm/property was President Warren Harding's birthplace. I, however, have a totally different reason to remember this place and it isn't the fact that a tiny bridge that goes over the tiniest brook less than 1/2 mile away from the inn was closed and we had to take a 1/2 hour detour to get there. What makes me remember this inn is what happened the day after the wedding. That morning we had breakfast with everyone: the owners, and the four or six other people who were staying at the B&B. During breakfast the owners were talking about how they left the city and decided to run the inn and the farm itself, and they were very excited to tell us about the pumpkins they grew and sold on the road. I was shocked to know they sold their produce based on an honor system; they set their beautiful pumpkins outside, and whoever buys them leave the money in a box that sits next to them. No one's there. Amazing! They trust that their pumpkins (nor their money) will be stolen. And it works for them! Anyway, before leaving, I was curious to see all of these pumpkins on the field, but I was distracted by a tree with red fruits hanging from its branches. Silly me had to go and ask, "What is that tree with red stuff hanging from it?" To my surprise (and to the surprise of everyone else who couldn't possible believe I was that dumb) it was an apple tree. Yep, an apple tree! 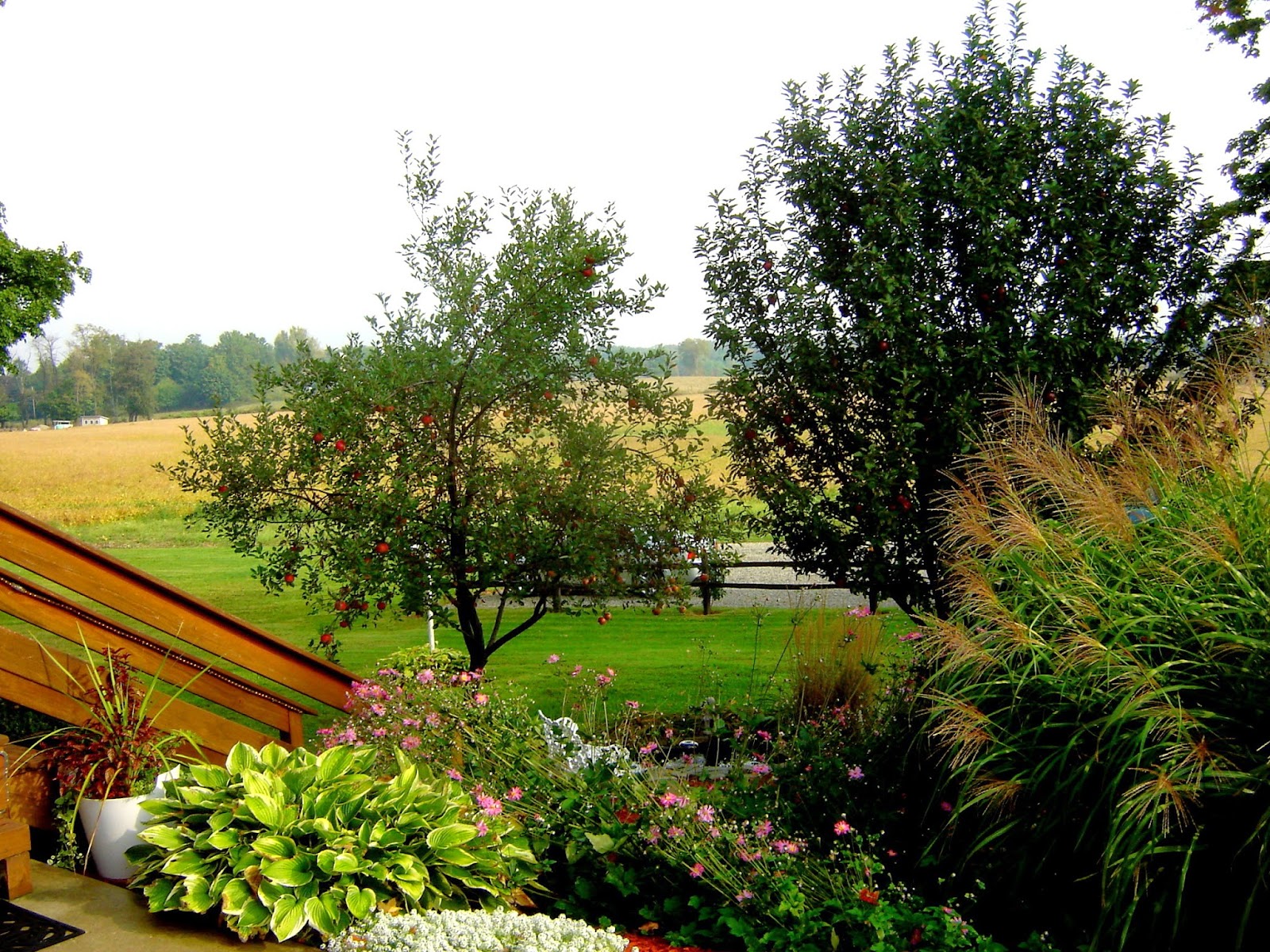 Now lets go forward four years. I went today to eat a snack outside my building at work, and I was puzzled by these red fruits hanging from a tree. At least this time, I realized they were apples before embarrassing myself by asking. These apples, though, are tiny. Just like the orange gardens in Seville, I think these are mostly decorative, but since I'm obviously no expert on apple trees, I have to ask... Does anyone know if these apples are edible? Are these crabapples? I don't think I have the nerve to go apple picking at work, but I'd love to know! 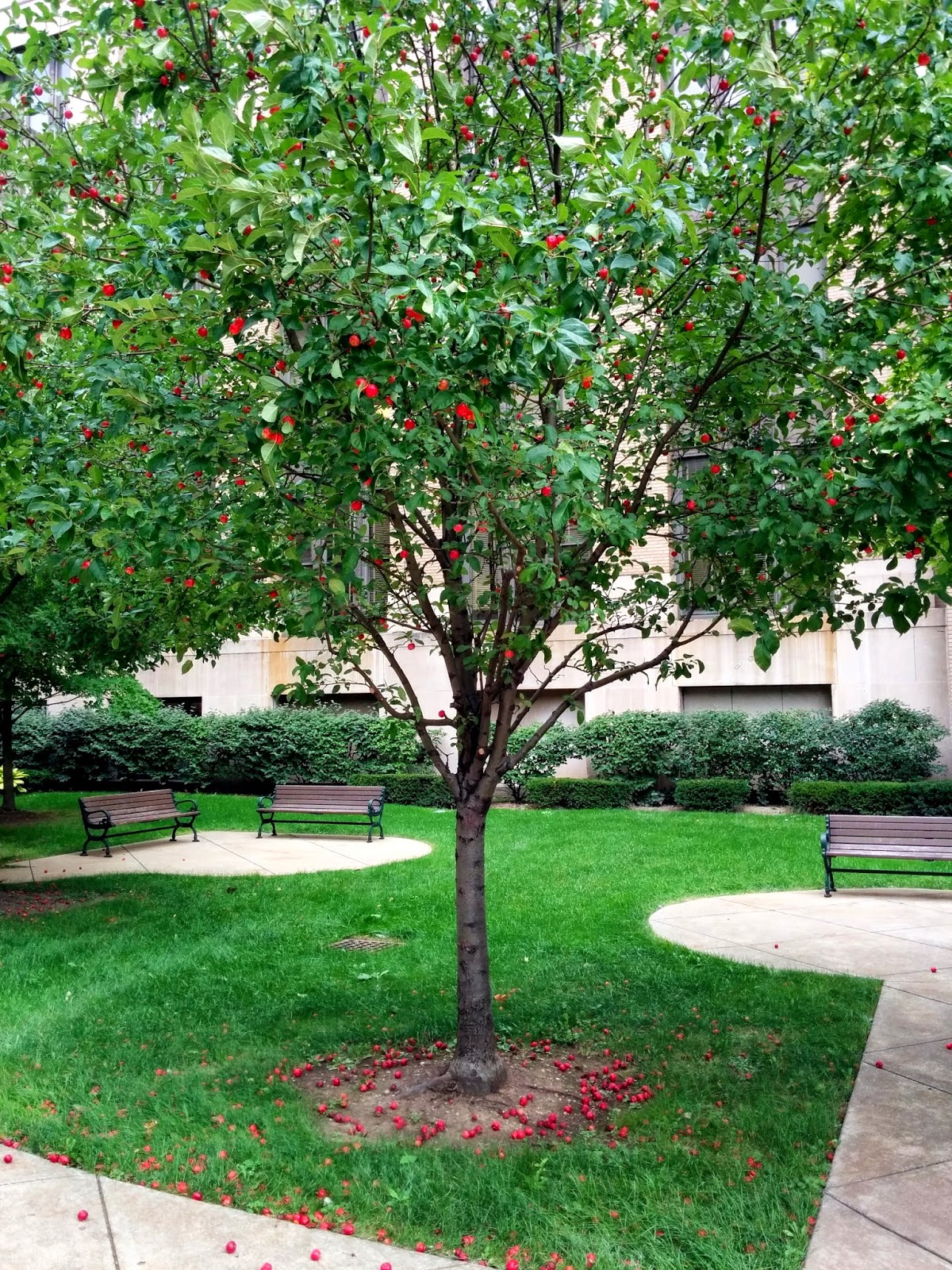 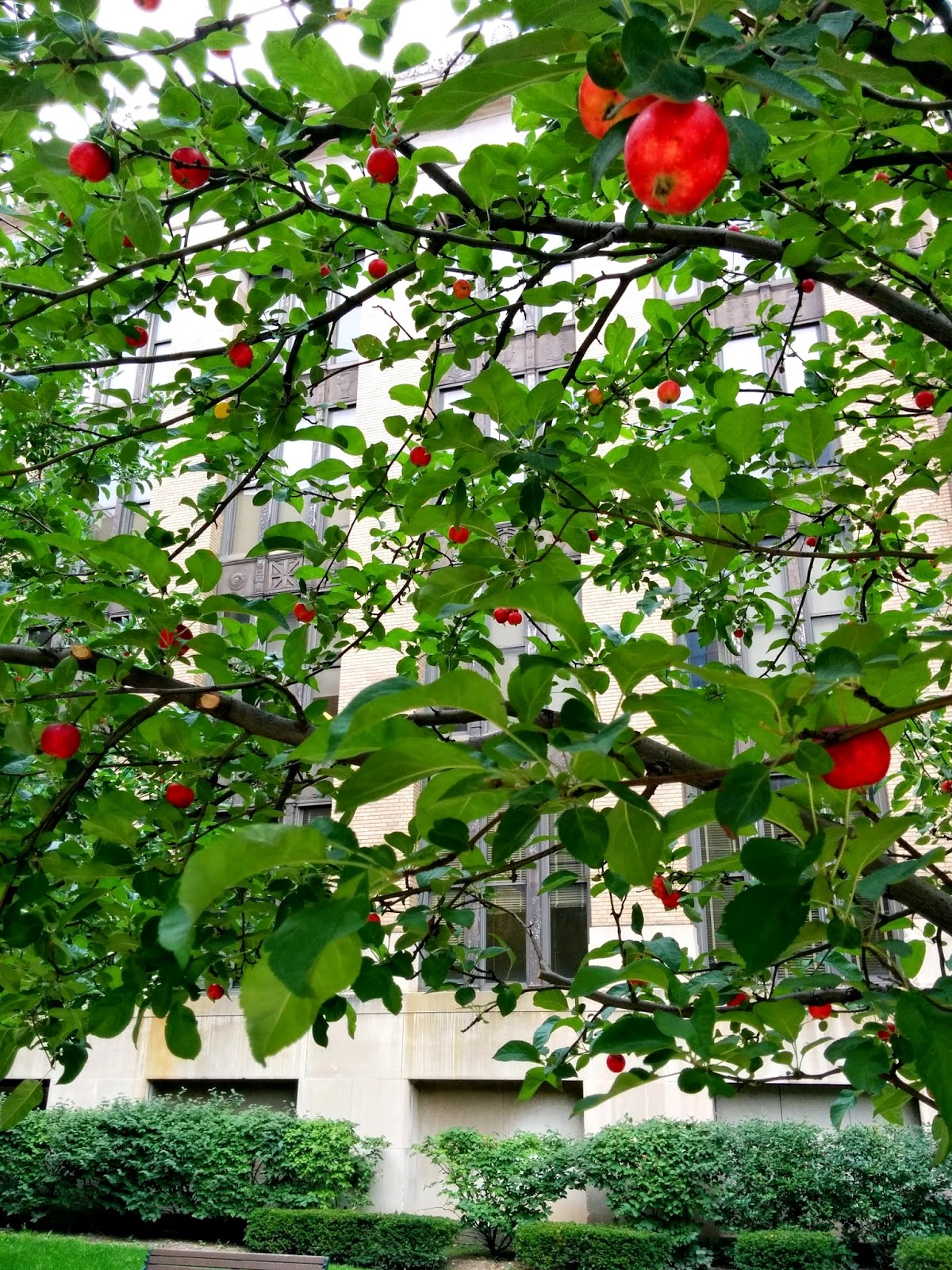 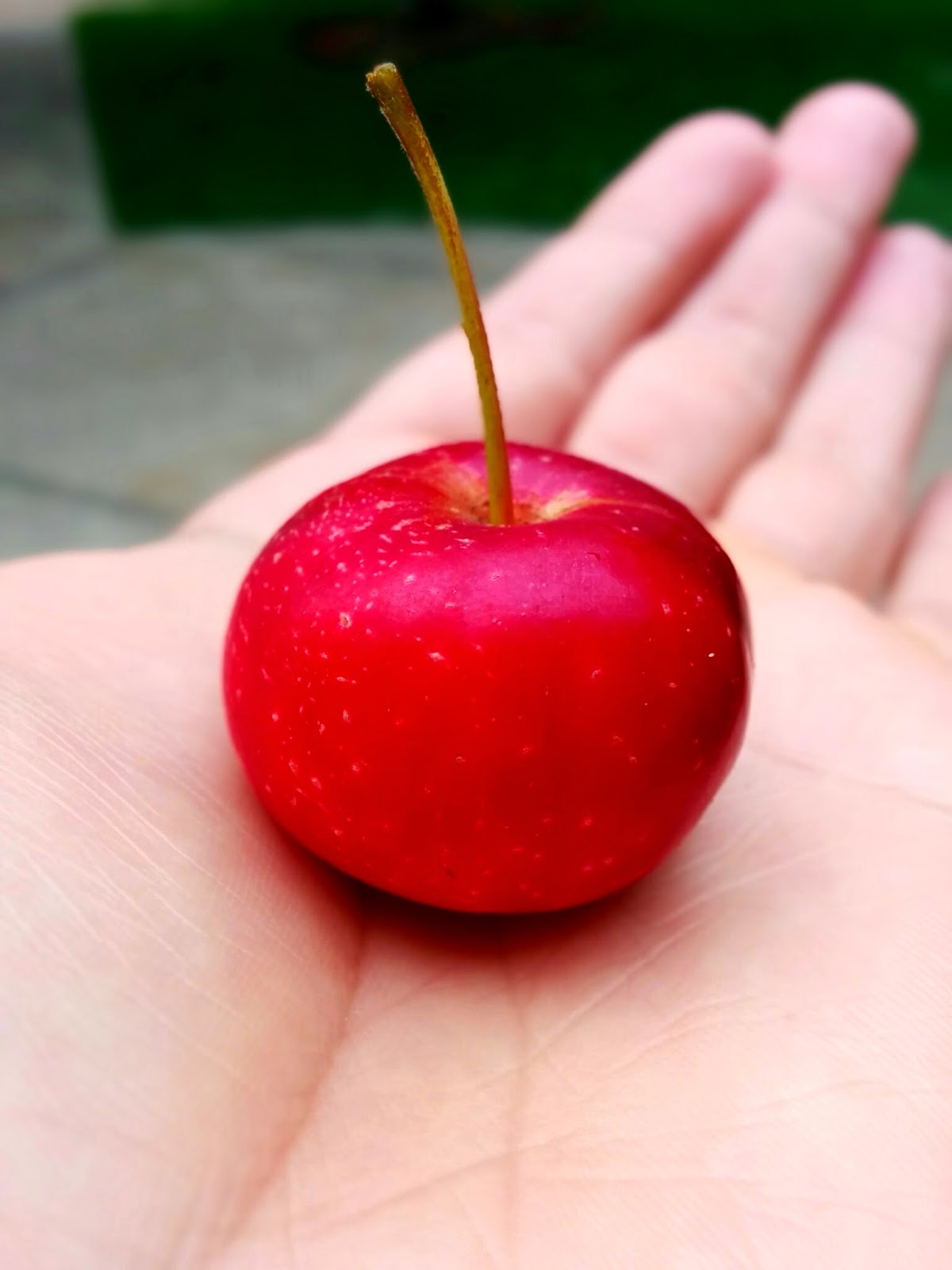 As a complete coincidence, the snack I brought to work was a cottage cheese and chunky cherry applesauce parfait. I felt it was kinda cool to be eating it under the mini-apple tree.  This is a really simple snack (or desert if you just need to satisfy a craving), but it is really tasty and satisfying. It has two ingredients: low-fat cottage cheese and store-bought chunky cherry applesauce. You can use  cottage cheese with any fat content you want, and you can substitute the applesauce for the regular kind or with any other flavor variety. Make it your own! 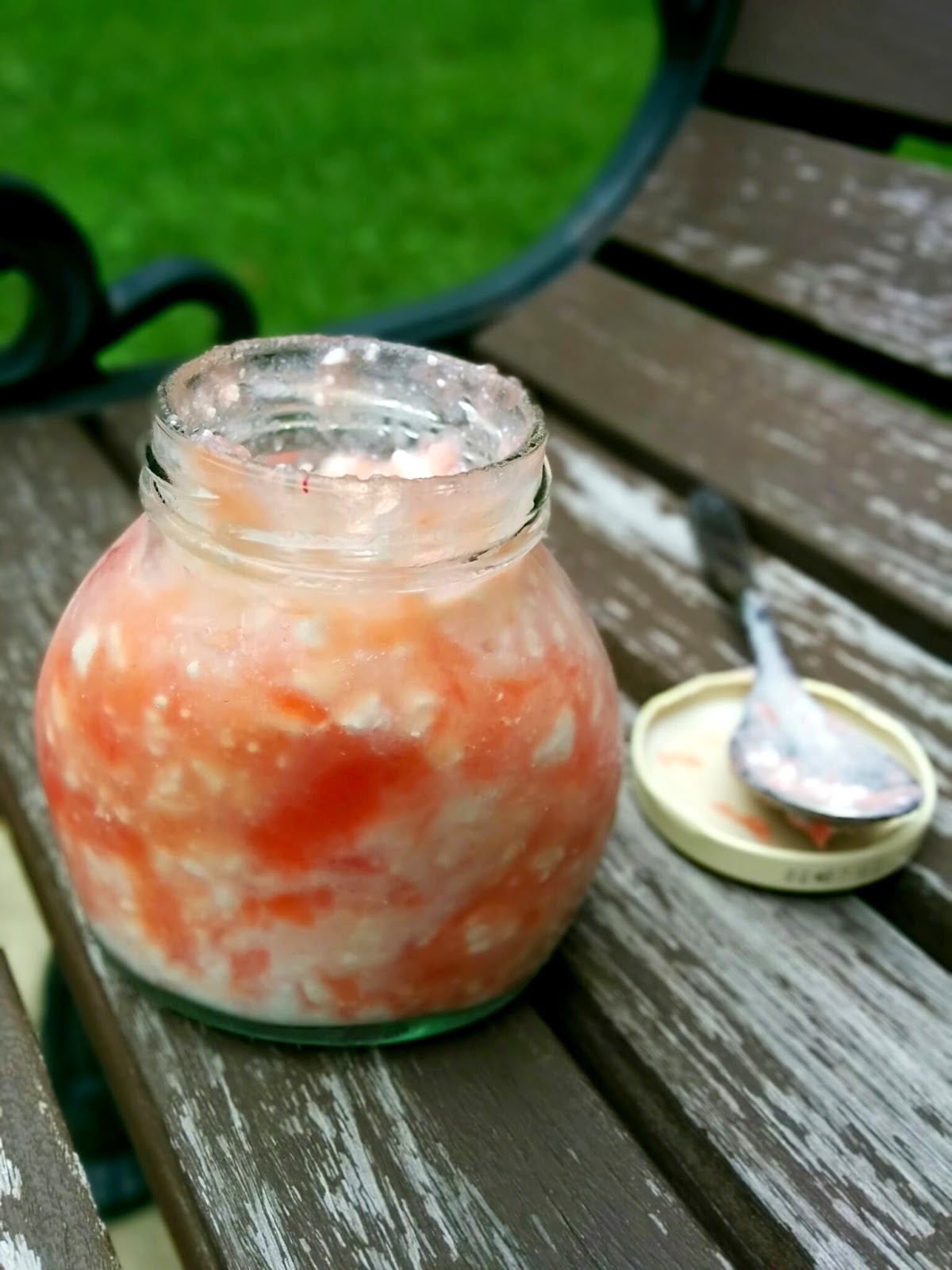 Mix the cottage cheese and the applesauce until combined.