I was utterly convinced that I would be doing absolutely nothing this weekend. Every single person I know was busy this weekend and poor plan-less me, had nothing to do. Nothing to do except cleaning up the yard (which desperately needs so much work), finishing something from the ever-growing list of unfinished projects around the house, or dealing with the monument to dirty laundry I'd created. Suddenly "nothing to do" turned into a scary, overwhelming, unrealistically comprehensive set of chores that threatening my life (or at least my every desire to actually live). So I trimmed the list down to a more manageable size, and I was able to actually accomplish a few things, and to actually enjoy myself as well.

Thursday
I went to a networking even at Case's brand new student center (virtual tour here). It's such a cool building; plus the event itself was pretty neat. I eventually ended up talking with an engineer student and an architect, and since the three of us were Spanish speakers, our conversation eventually ended up in Spanish. Although the two gentlemen were way too nice to comment on it, I was reminded that I really need to work on my Spanish. It's bad enough that I go through life speaking in broken English but to actually speak in broken Spanish is just too much. Enough with my lazy speech...

Anyway, after forcing myself to pronounce all those Ss, Ds, Ls and Rs, Os and Us, I still had the energy to get on my bike and go for a ride. A "short" 20 mile ride took me through one of my favorite Cleveland Metroparks, the Euclid Creek Reservation. Just days ago I crossed the park riding on the opposite direction (downhill), but this time I was going uphill.As much as I enjoy the speed and ease of going downhill, the uphill ride allows me to really take in all the beauty that the park has to offer. 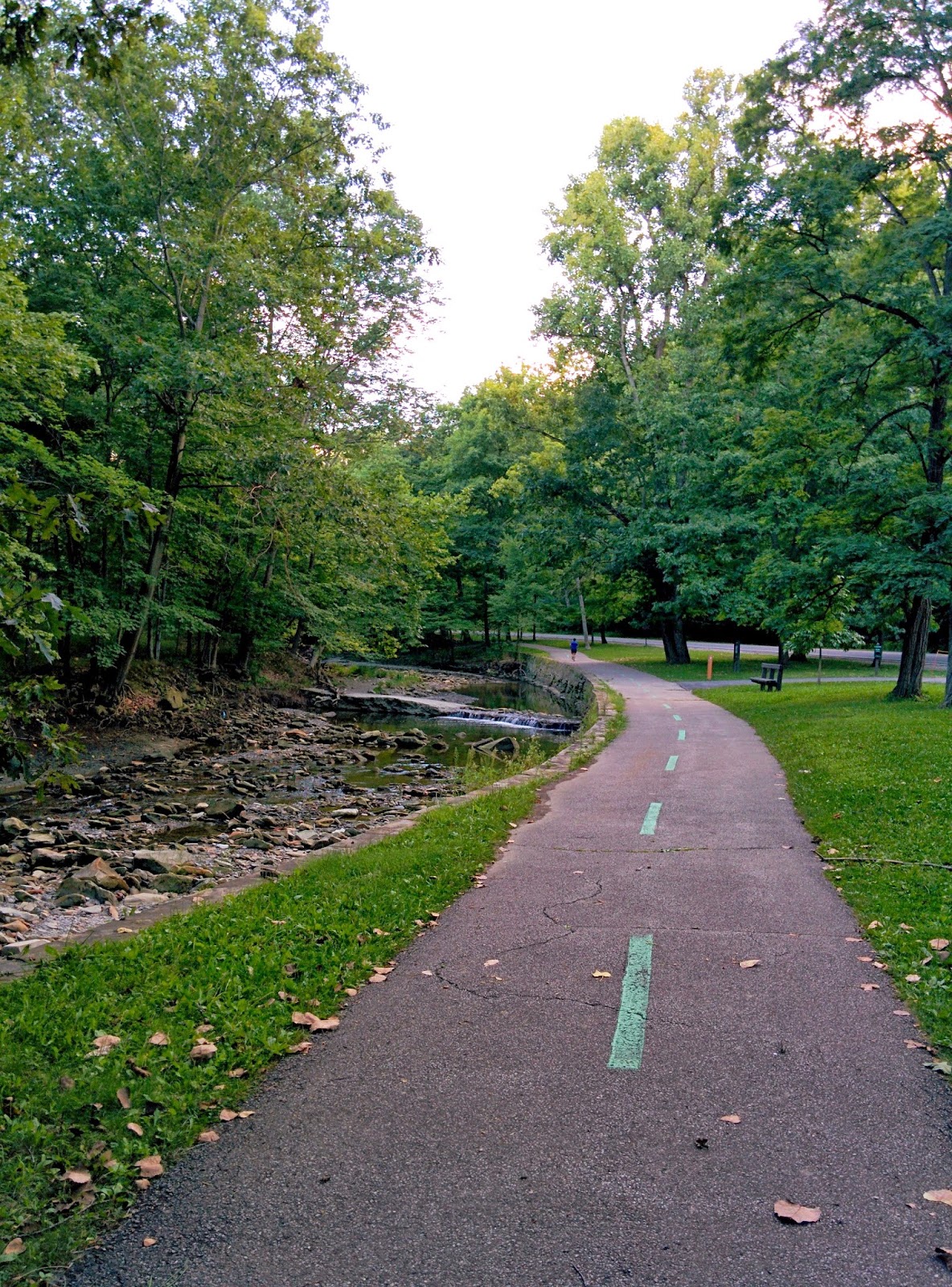 Friday
Normally I go out to dinner on Friday night, but I didn't really feel like doing it this weekend. Instead, I was on the mood to have some picadera or tapas. Of course I wasn't planning on making anything that evening so I was starting to run out of ingredients to make anything fancy; I wasn't discouraged. To be able to handle this dinner-less dinner, I knew we had to start with wine (wine goggles!).  We started snacking on wheat crackers with a tuna-Neufchatel dip that was absolutely delicious. The best part was that it was ready in just a few minutes. Since this food was the opposite of fancy,  I went crazy and even used storage bowls to serve, so we could effortlessly save the leftovers (and minimize the amount of dishes to wash at the end). 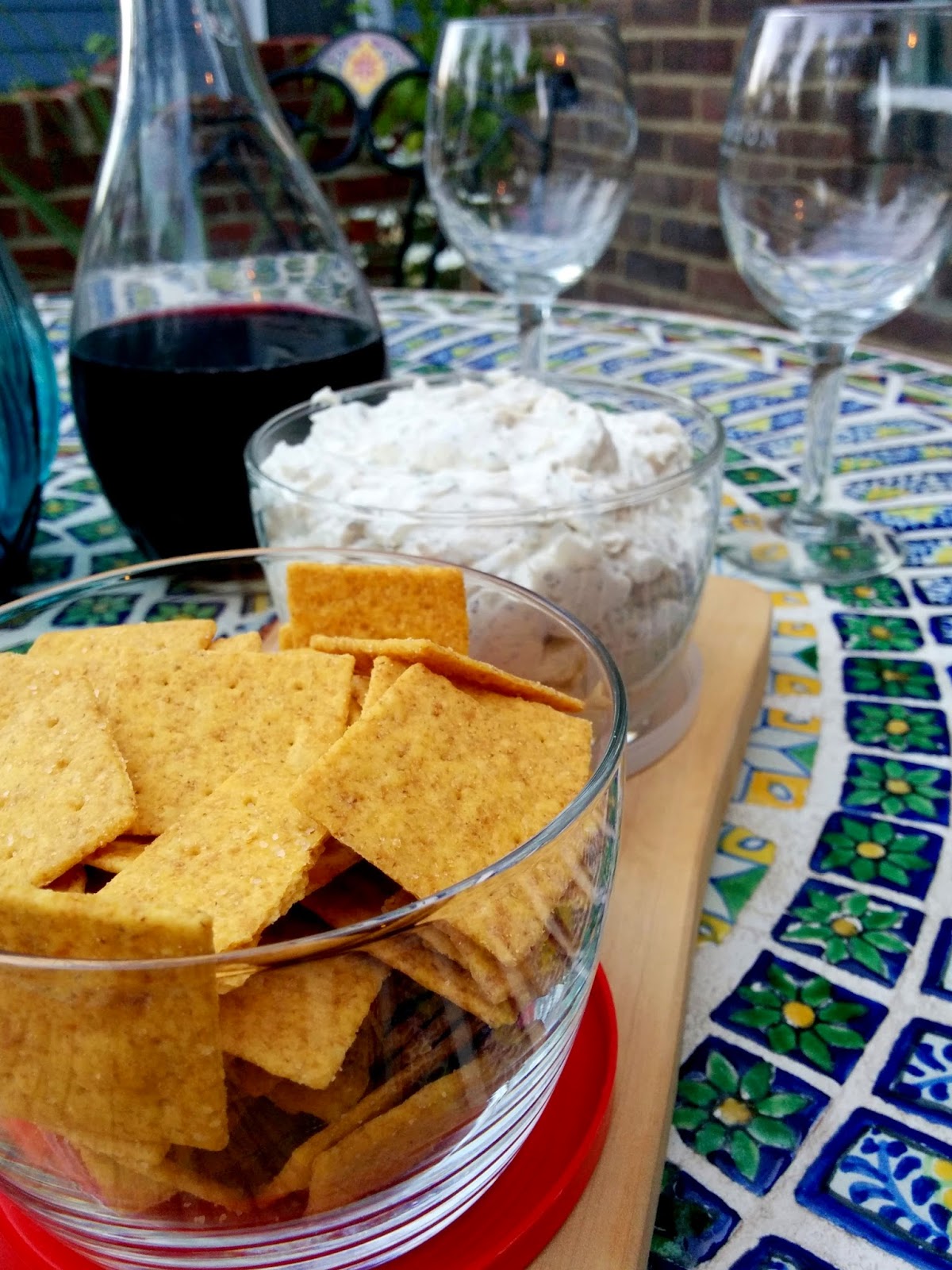 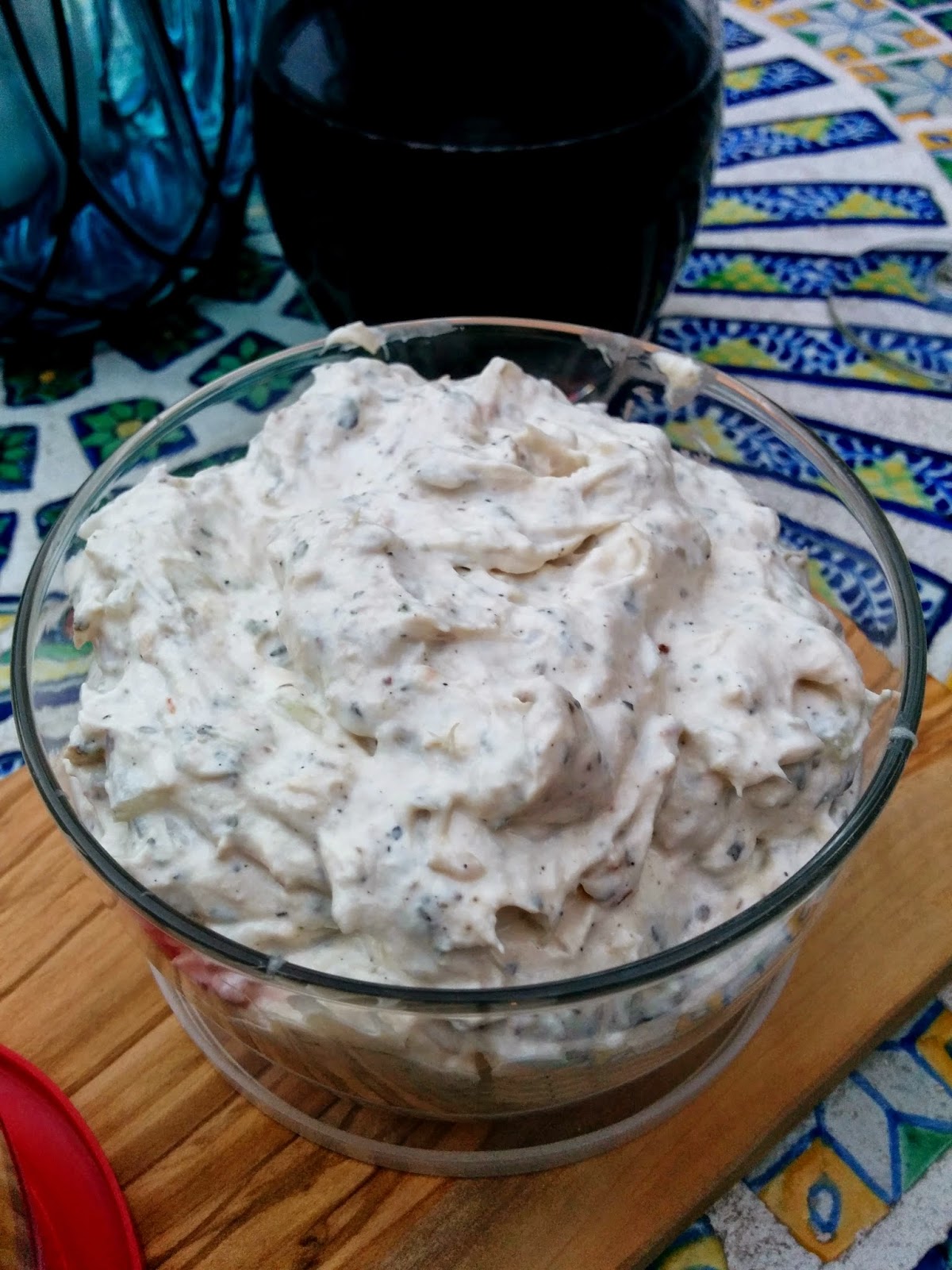 I found some chicken wings and drumsticks in the fridge. They weren't many, but they were enough for the two of us since we were eating tapas style, so I roasted them along with potatoes (French fries-size). Some ketchup on the side was the sole compliment to this deceivingly simple chicken. 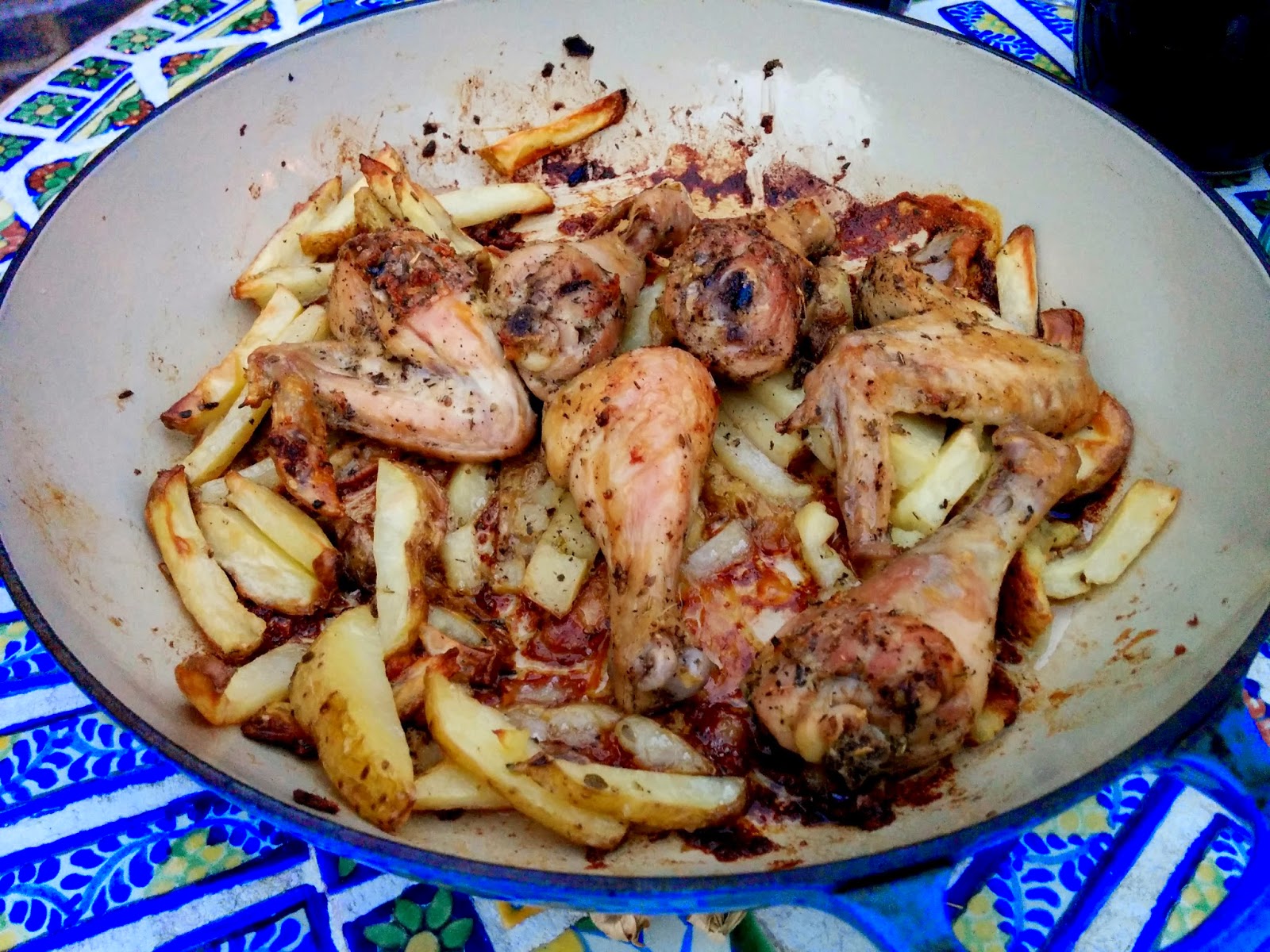 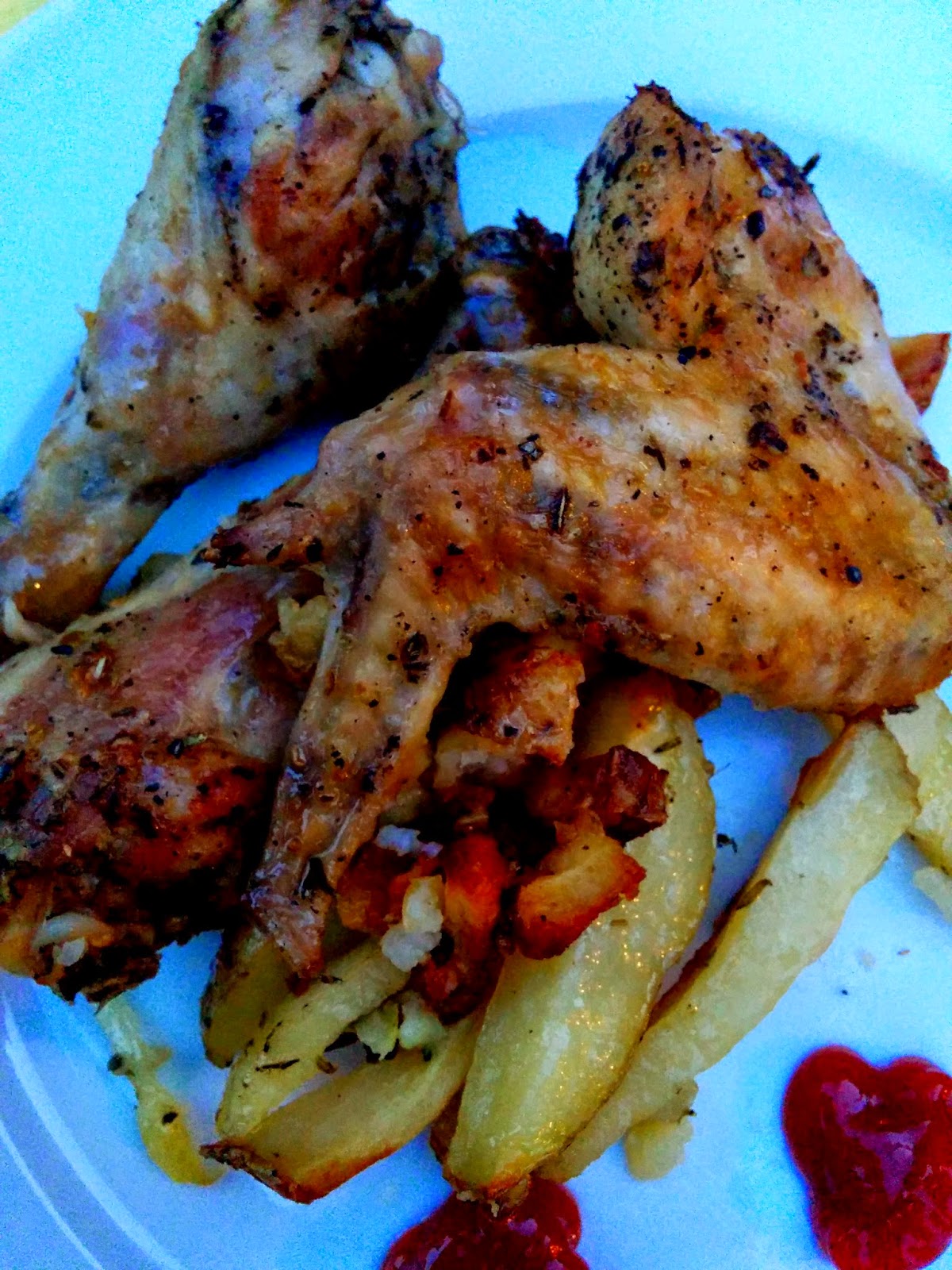 Finally, our last "course" that evening was a Dutch baby. I've tried different recipes, but the one I like the most is from Allrecipes.com. What I like about this recipe are the ratios of the ingredients and the cooking method. I love how well this baby rises, and I love the almost pastry dough consistency at the bottom (a.k.a. the butter) and the spongier,crape-ish upper part. Delish! I changed the flavor profile from the original recipe to incorporate some more nutmeg, I added cinnamon, and I used lemon extract. Finally I dusted powdered sugar on it, and we dug in. The flavor was so good that I felt compelled to share the recipe (at the end of the post). 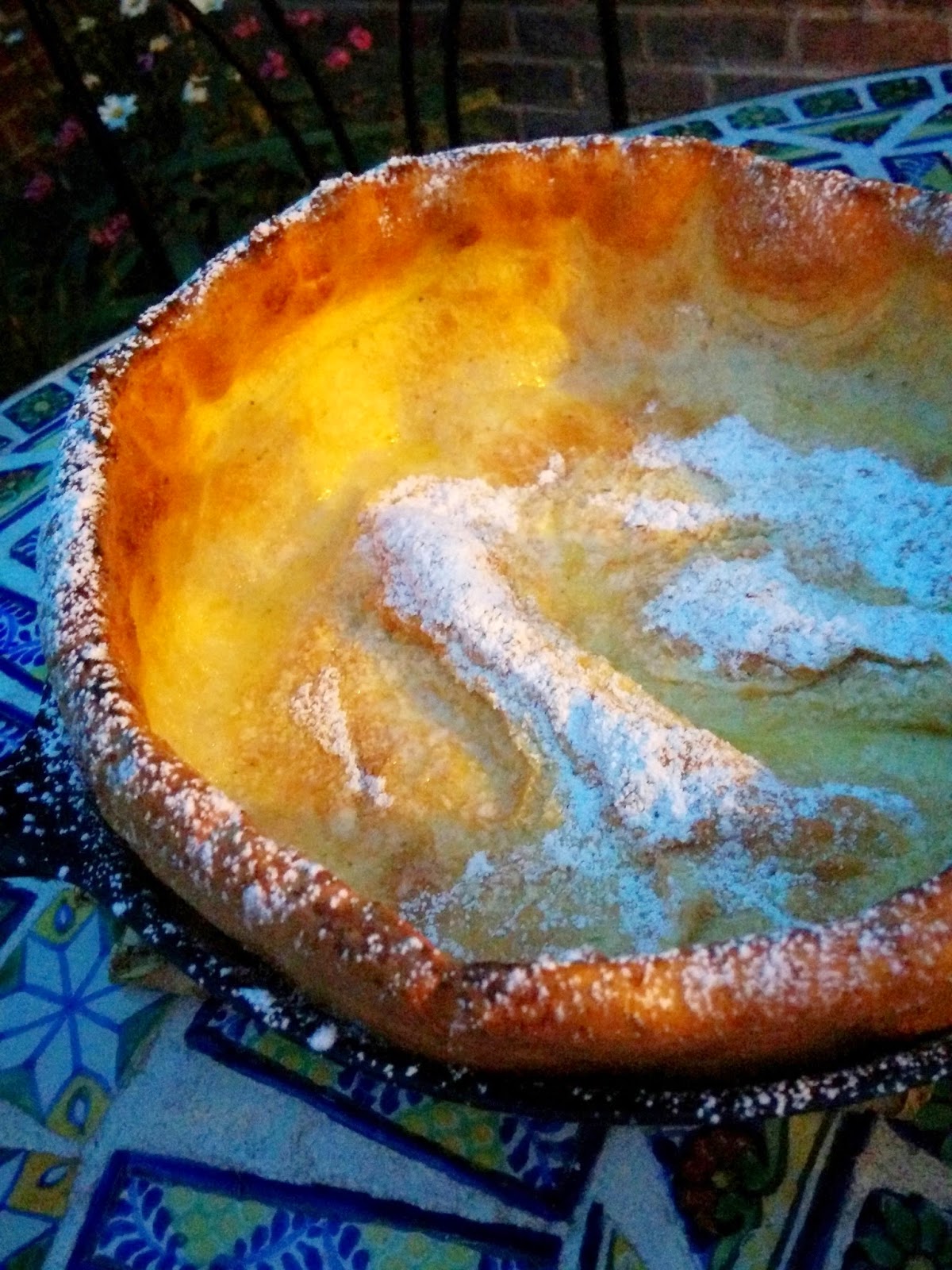 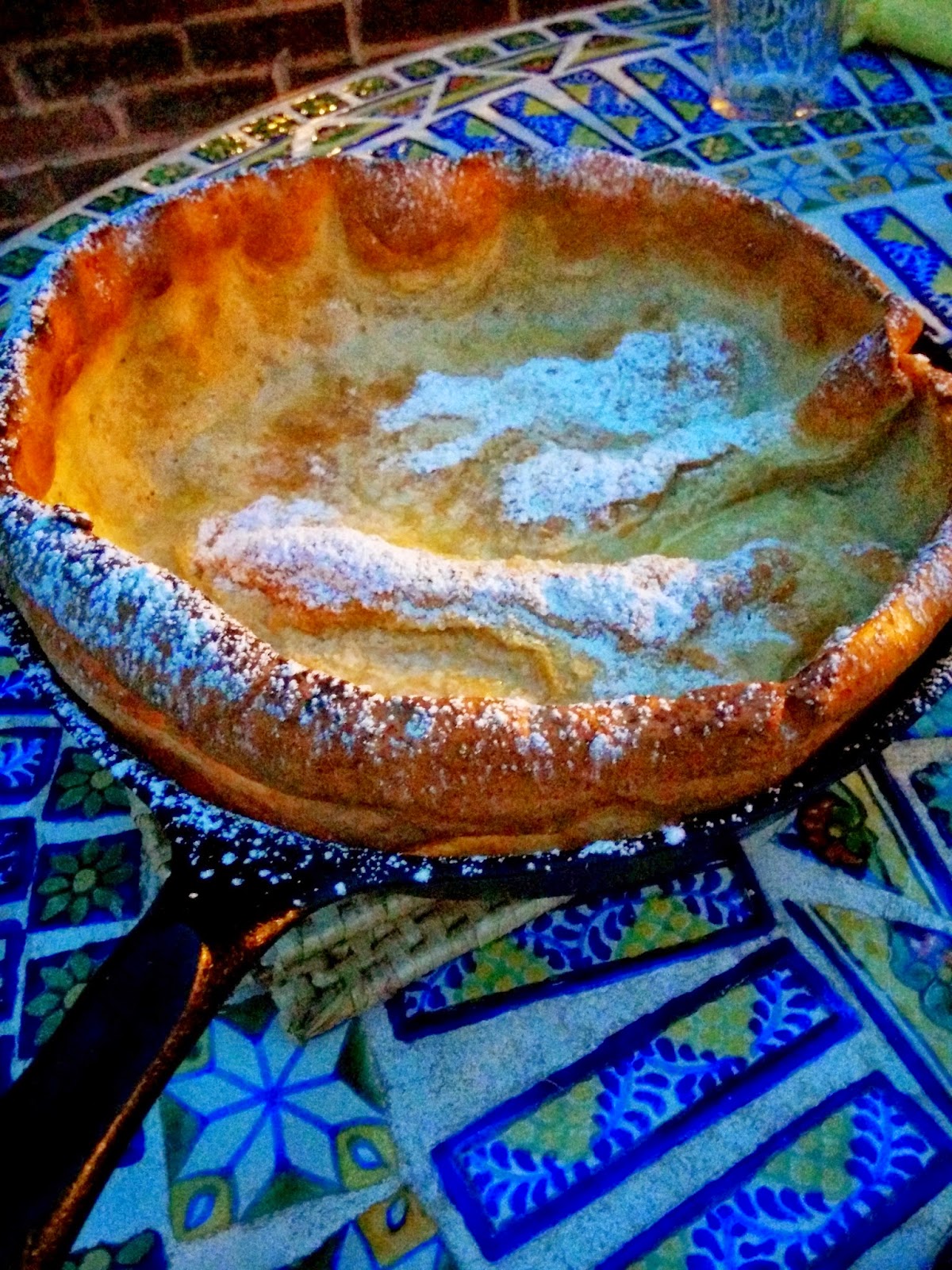 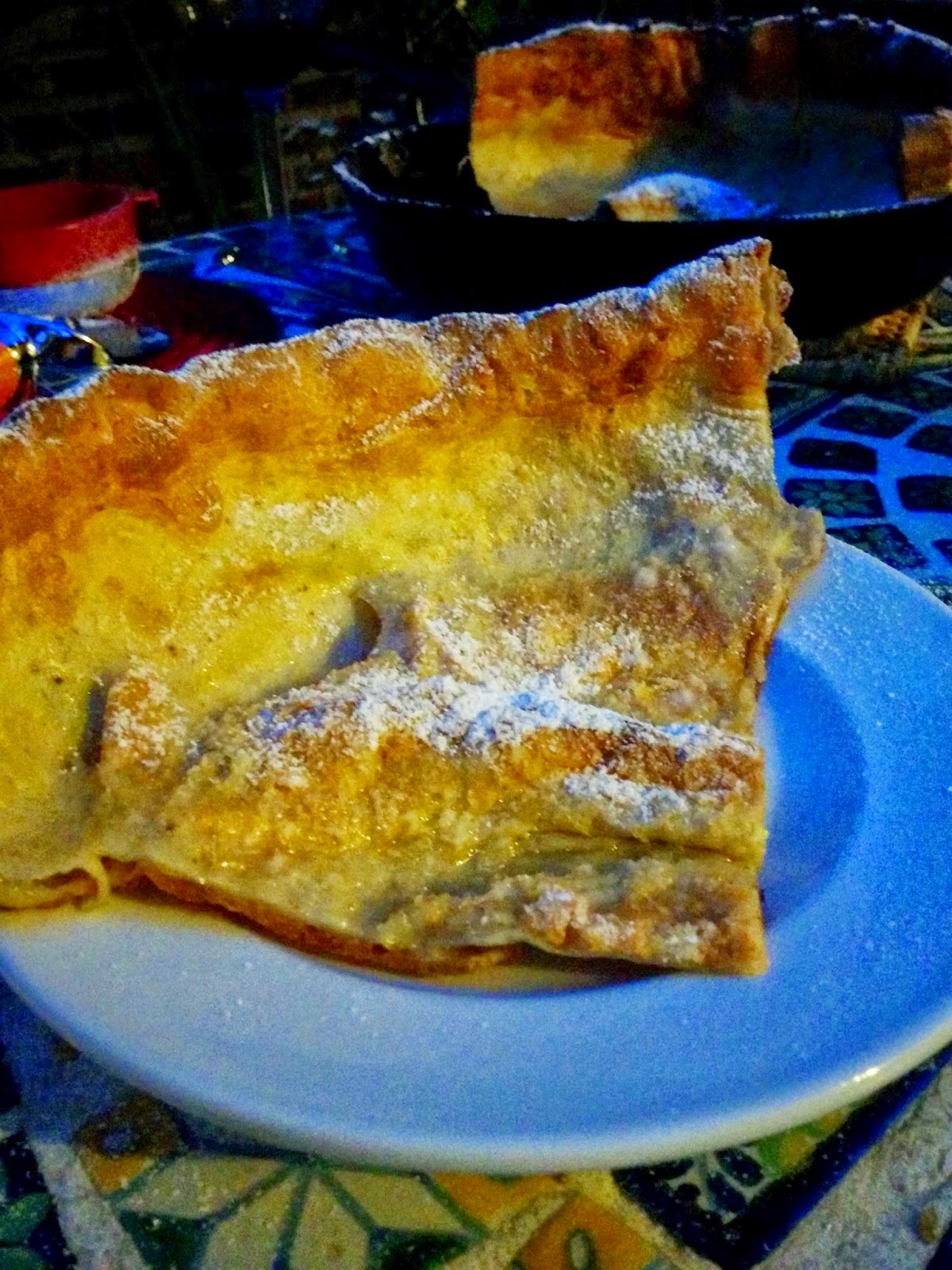 Saturday
I spent most of Saturday on the West Side of Cleveland. First I rode my bike to on eof my favorite places in town- Crocker Park (mall). After the 48-mile bike ride I went to the County Fairgrounds to attend the Oktoberfest (I know, it's not October...). I had really good beer, and it was so much fun to watch these guys' act. I had some food there, but I wasn't too happy about it. The food itself was fine (even though they actually served me stale bread), but it simply wasn't my cup of tea. We did have some really good cherry strudel and custard squares on puff pastry! The one thing I was thought I'd have for sure but I dind't, were good pretzels; I did not find a stand. But I'm sure it was me; there were too many options and too many people around, so I probably just didn't see them. 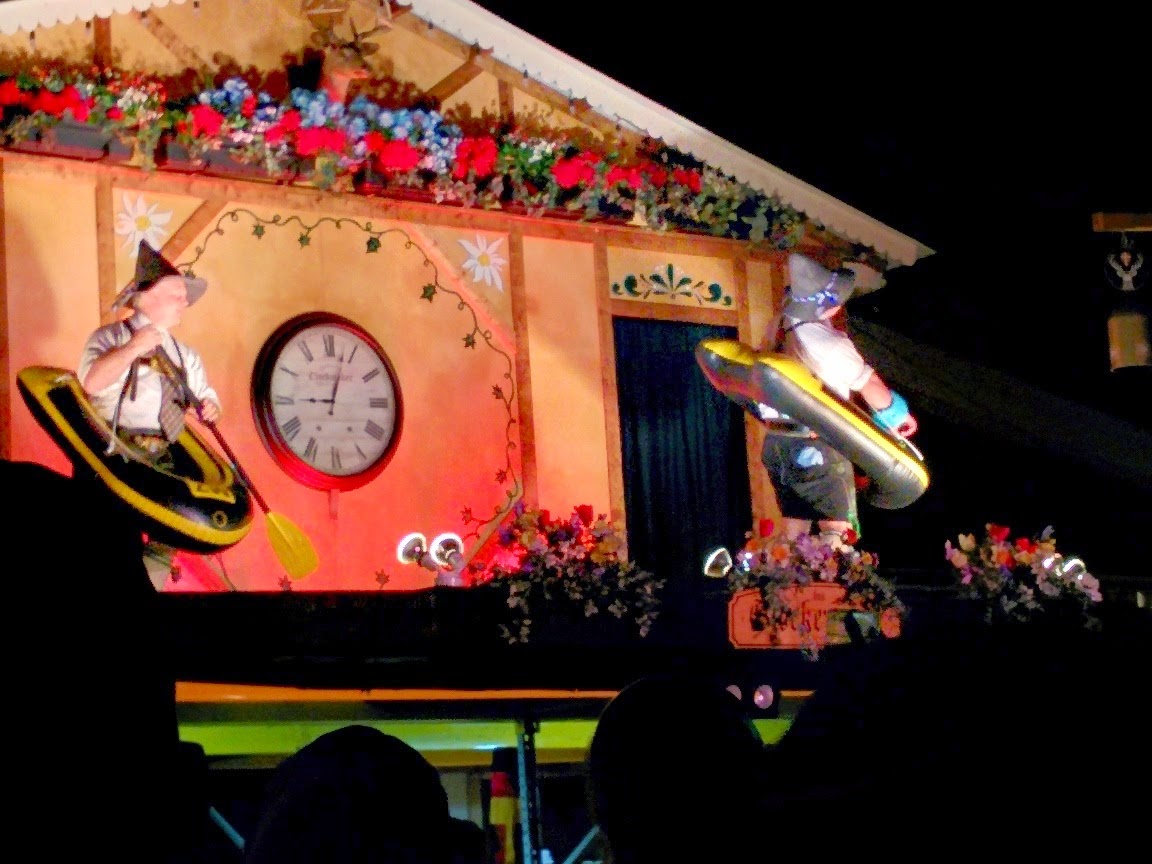 Sunday
Two things. First, I found this really cool CD, a music compilation from Discos Diaspora, an indie label back home in Puerto Rico. It's called Indie Martin and it features indie bands playing covers of
Ricky Martin's songs. They're mostly in Spanish, with a song or two in English. And the album can be downloaded free here!

Secondly, I had dinner at the Blue Canyon Kitchen and Tavern in Twinsburg, OH. It's a beautiful restaurant with a beautiful grand room, an amazing bar, and really good food. I had elk (for the very first time- yeah) , which was very lean and delicious and its sauce was amazing. Of course I had to add up to my calorie budget by having the "bomb". Wow! The bomb is a beautiful chocolate cake, with mousse and then chocolate ganache. 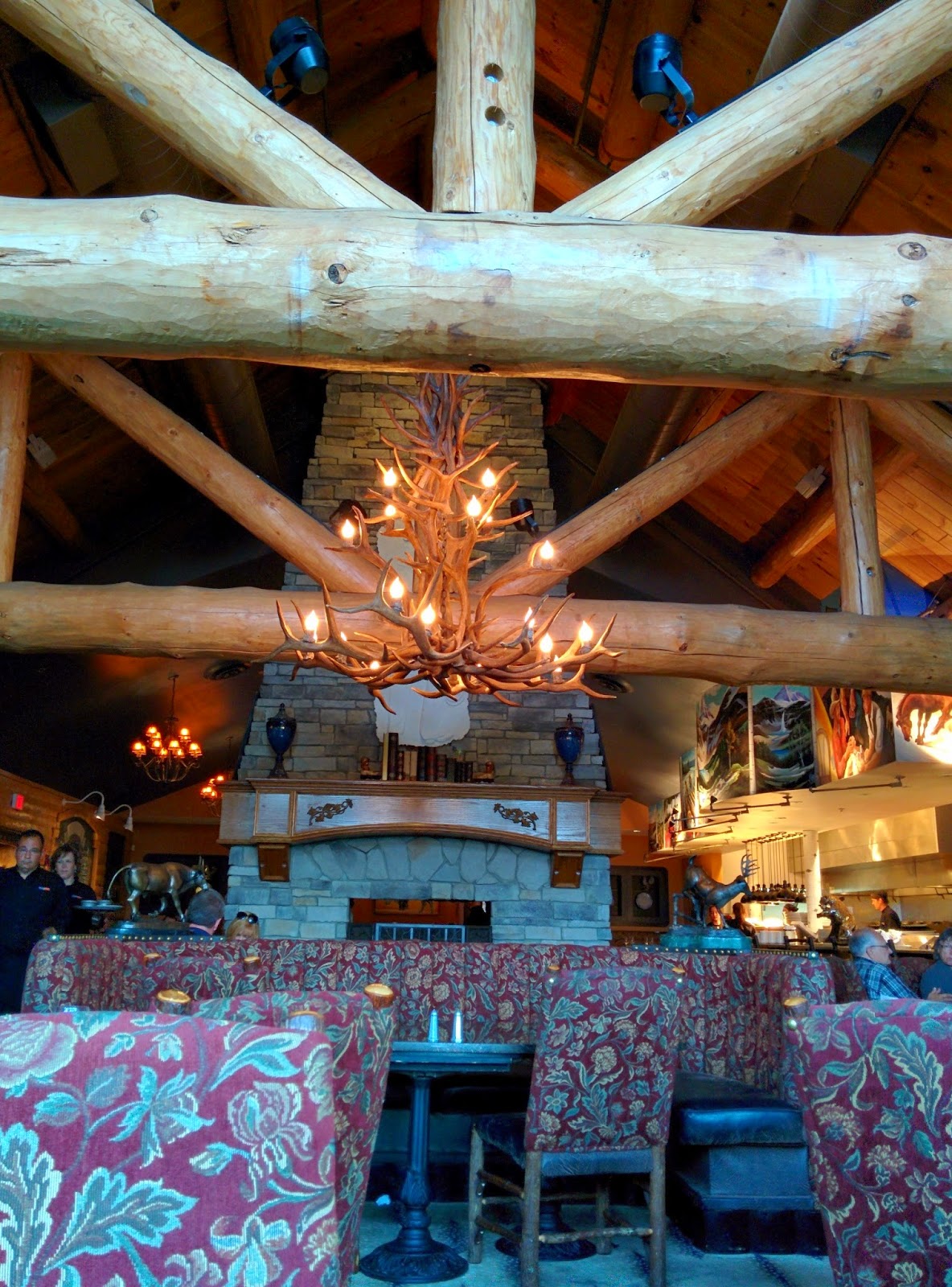 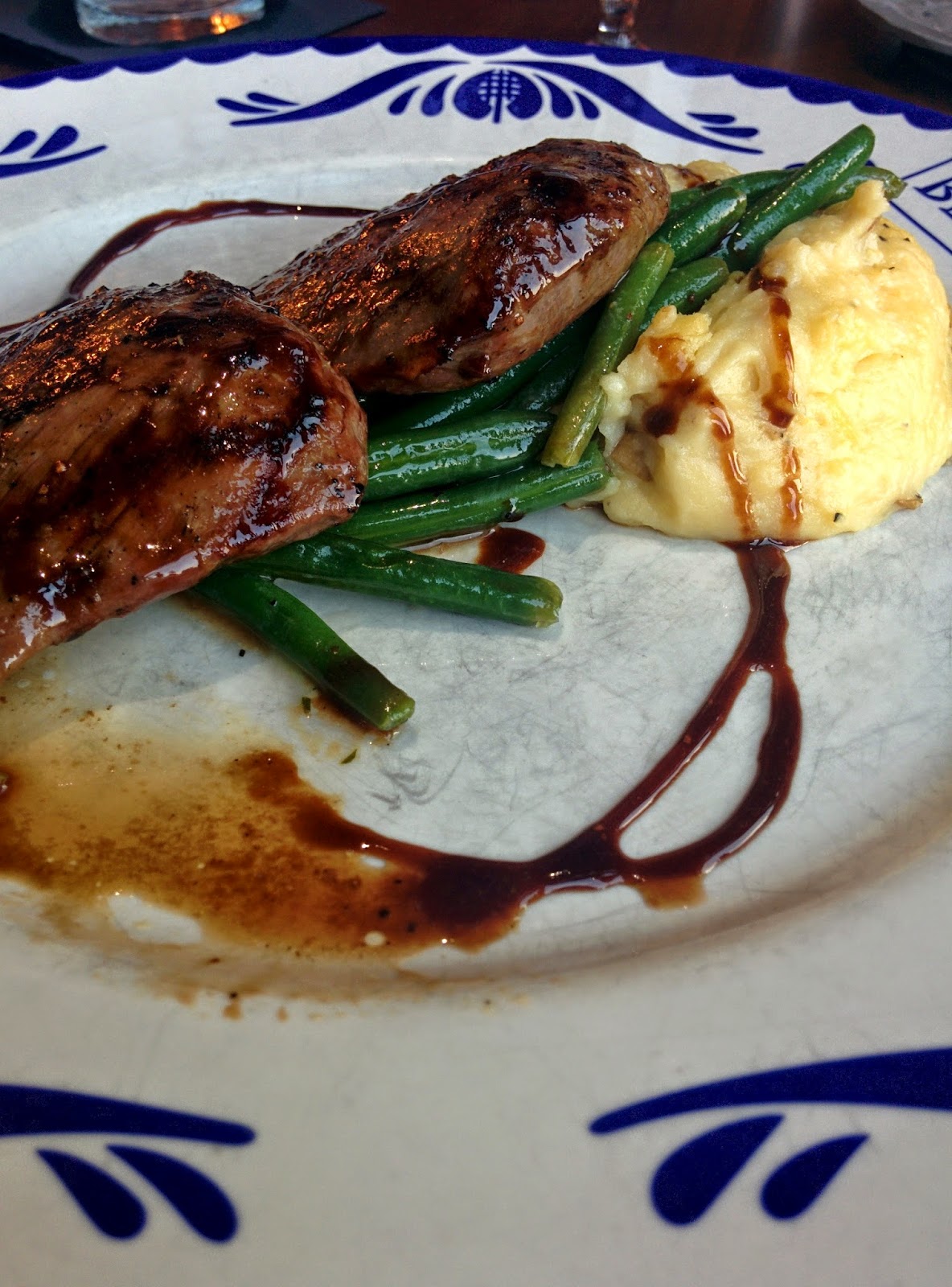 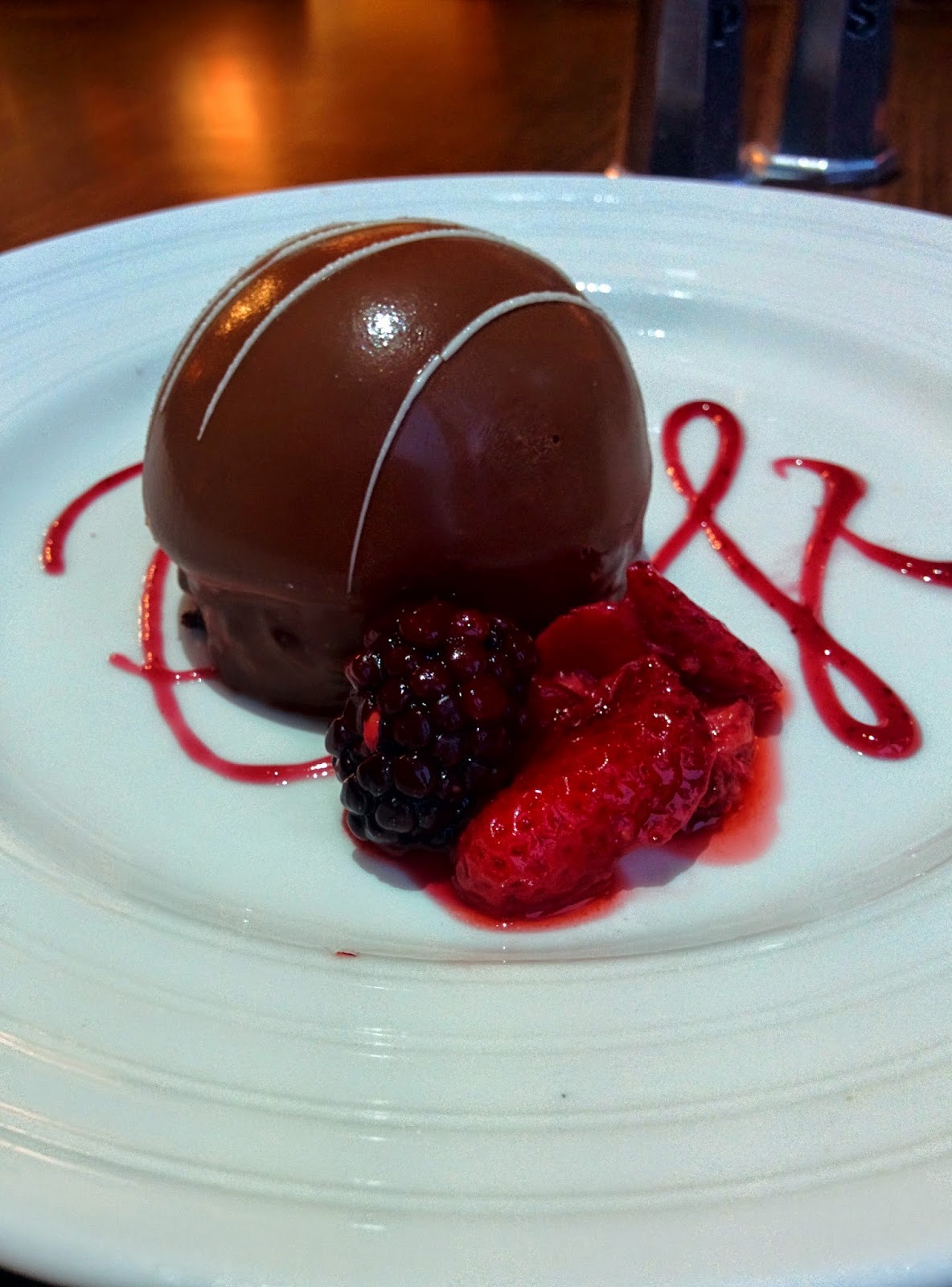 And when I was not doing these things, I was actually doing my chores! The yard may still need work, but I had a really nice weekend! I think it was a good trade-off.

Place an iron skillet in the oven  while it heats up.

In a mixing bowl, lightly beat the eggs. Add the milk and lemon extract and mix. Add the flour, salt, sugar, nutmeg and cinnamon and mix until mix. This should be a liquid batter.

Once the oven has reached 475F, remove the iron skillet and lower the heat to 425F. Add the butter to the pan. Once it melts completely, add the batter and transfer to the oven. Bake at 425F for 12-15 minutes.
Posted by Angel at 11:16 PM