This weekend was the annual Puerto Rican Parade and Latino Festival in Downtown Cleveland. Based on my perception, this is one of the biggest cultural/ethnic fiestas in town, as it should. Cleveland has the 11th biggest Puerto Rican population in the US, a good 7.4% of the population, and they (we) were out and about celebrating their (our) heritage. I missed the parade; that was supposed to be at noon going through downtown Cleveland. I made it to the festival though, located at the Cleveland Municipal Lot on South Marginal Rd (across from the Burke Airport). 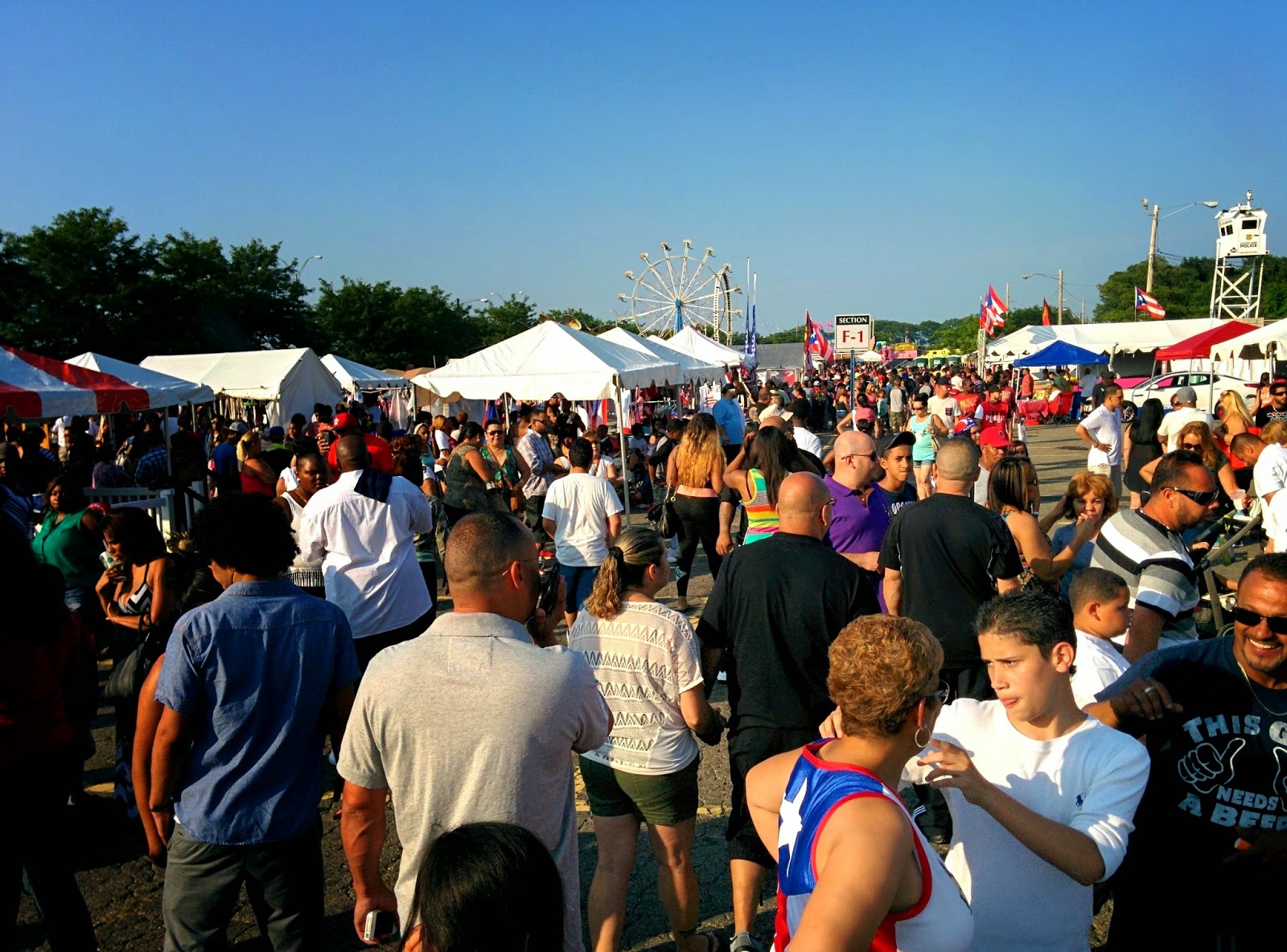 The first thing we noticed was that the Puerto Rican flag was everywhere. The Monoestrellada (single-star flag) also served as inspiration for some serious PR-pride couture. People had shirts, dresses, caps, bandanas and accessories modeled after the flag. If you could wear it, someone had it. 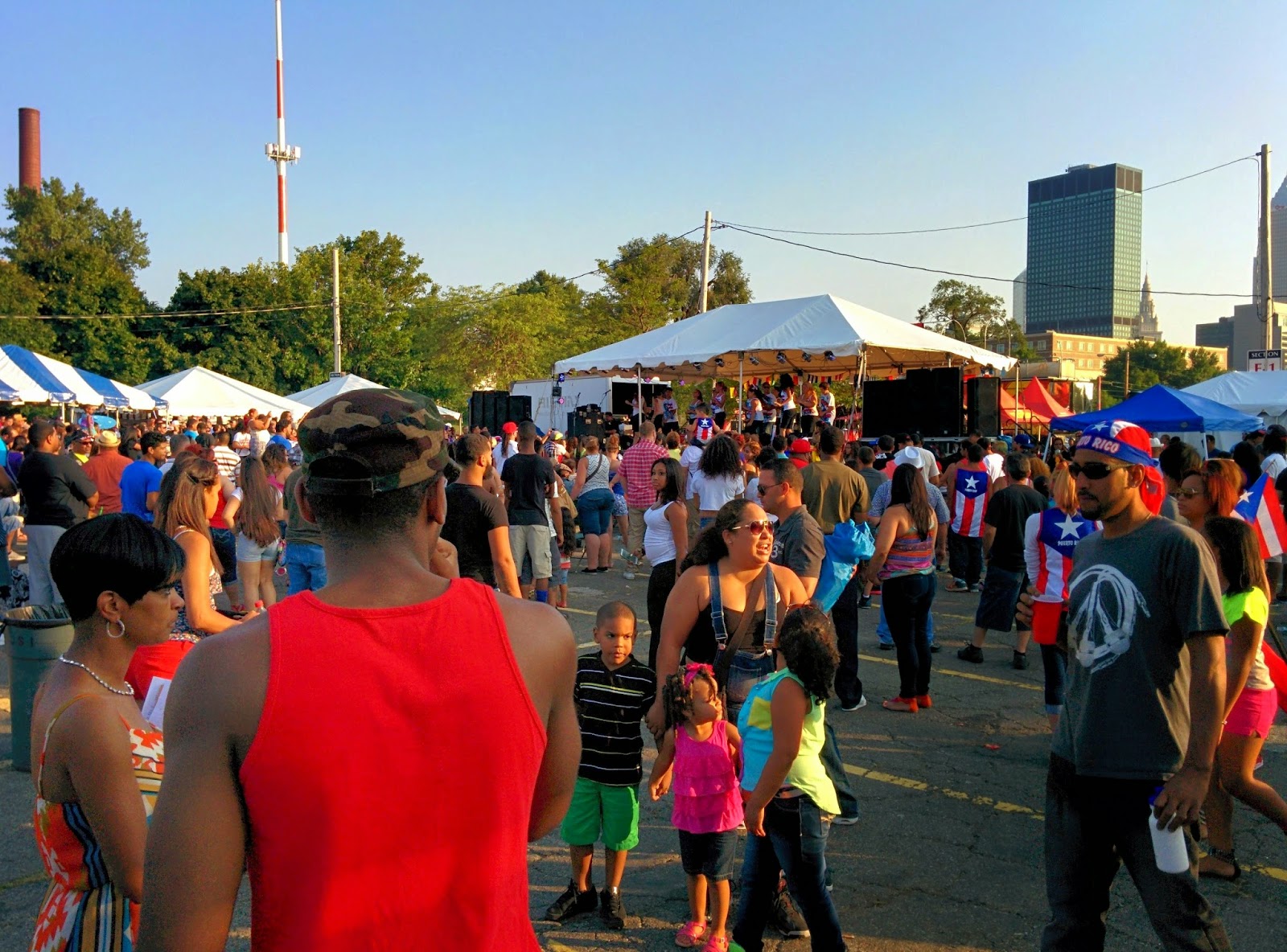 Of course, if you didn’t have any of those things, you could go to any of the kiosks and treat your little heart to something Rican. 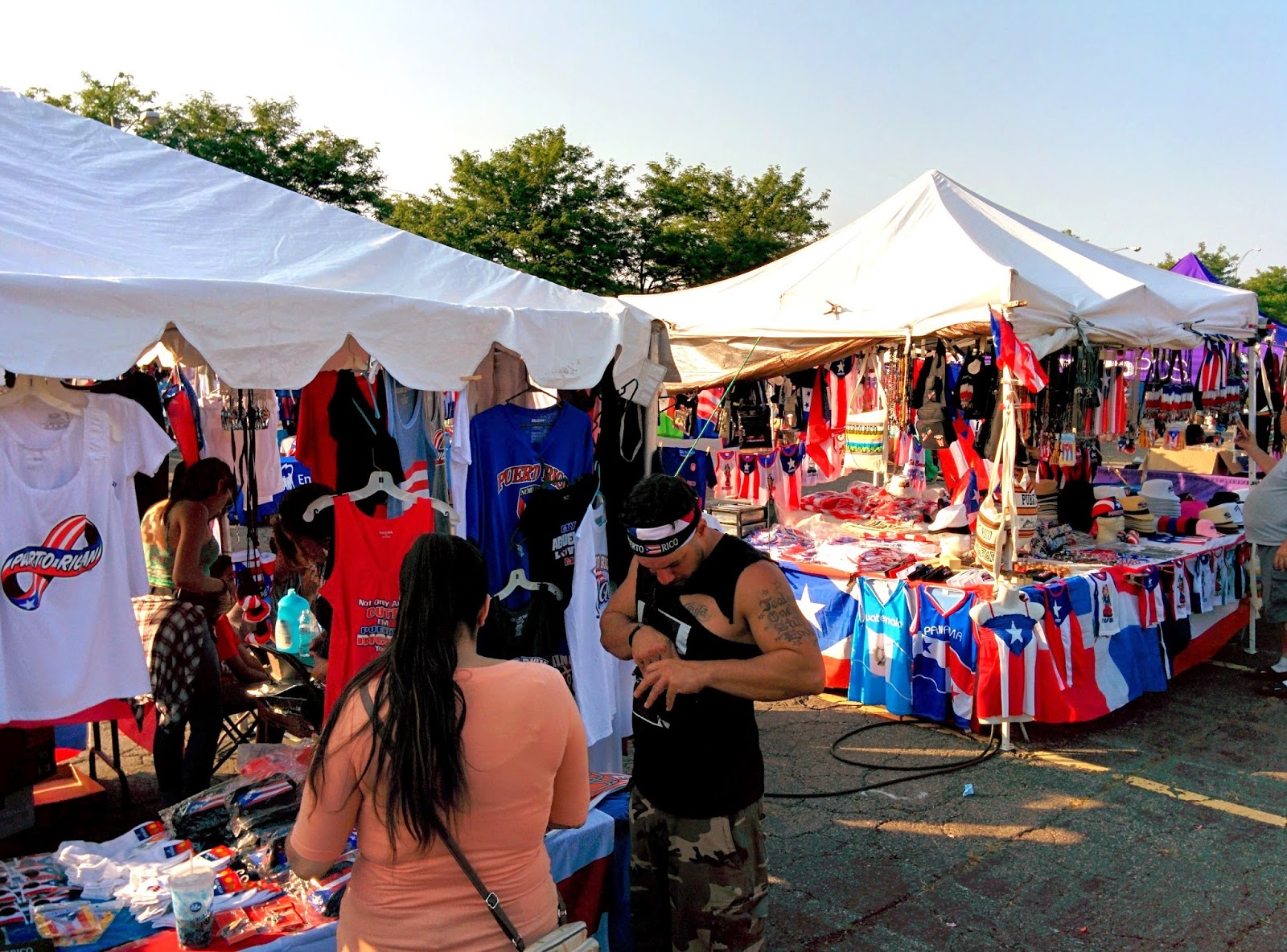 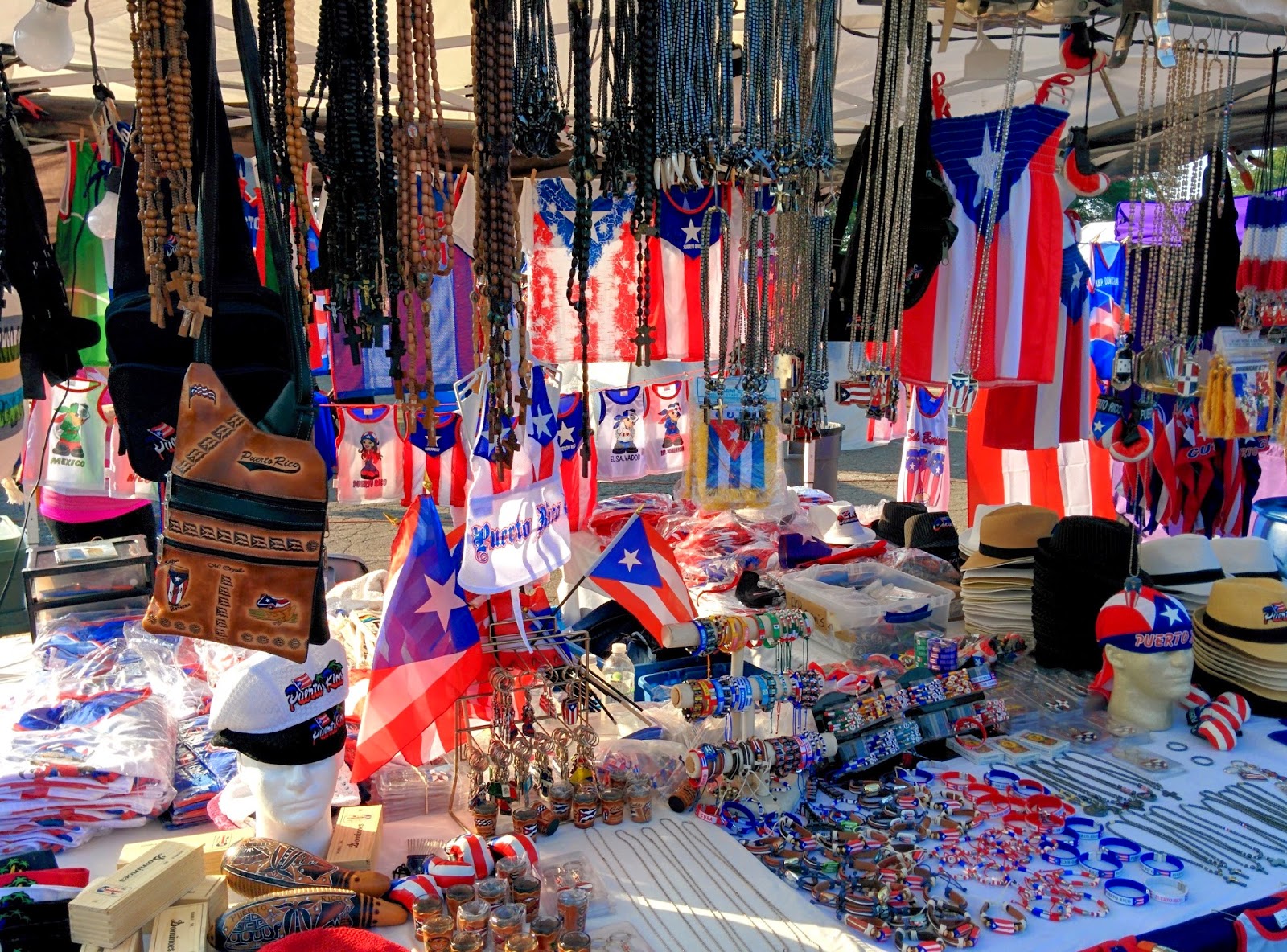 But if you didn't want to spend your money on it, at least you could enjoy the Puerto Rican boombox-bike that circled the festival playing Puerto Rican music. 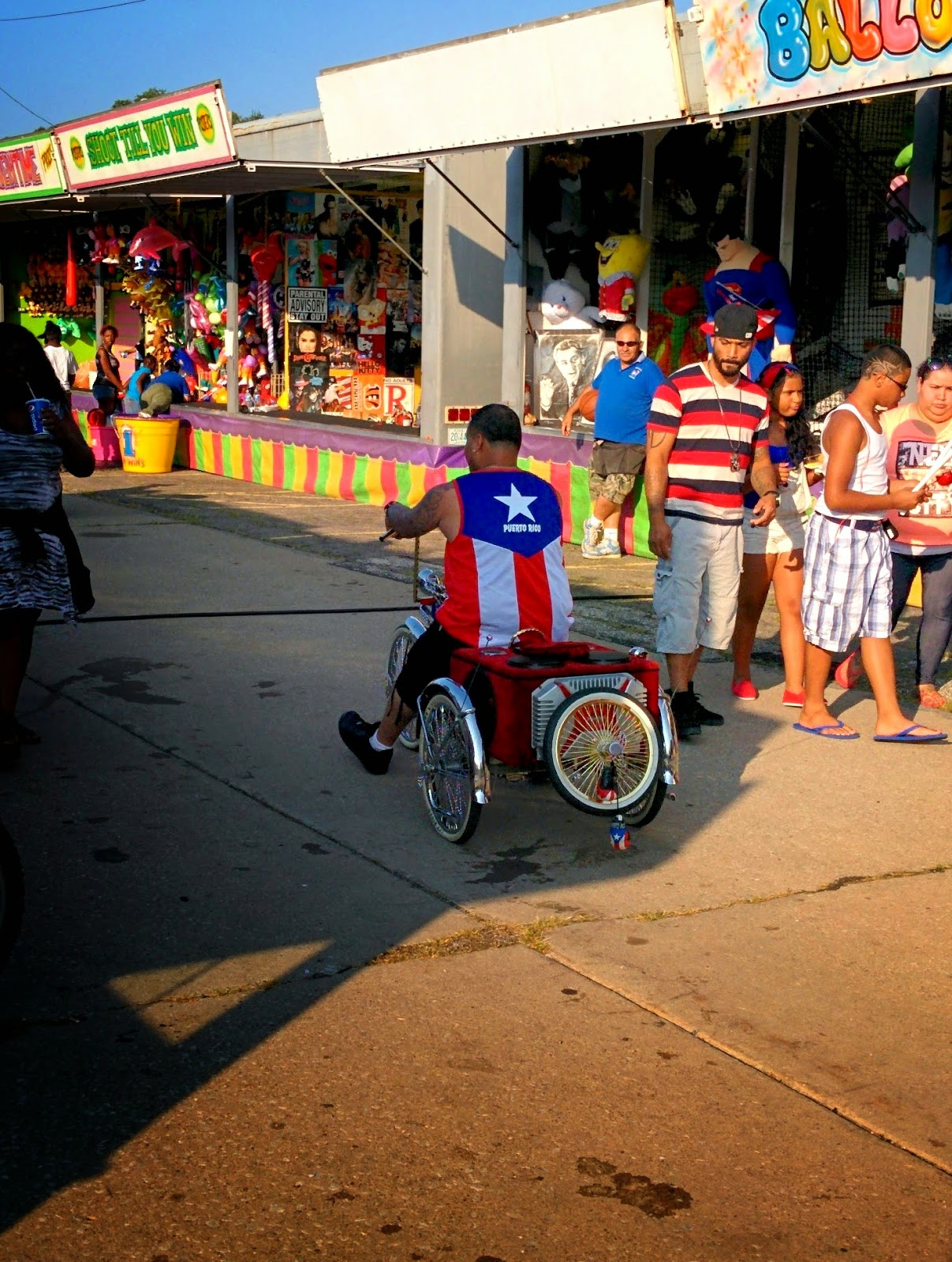 Like in the fiestas back home, there were plenty of rides for the little ones to have fun at, as well as carnival games. Of course, this is still Cleveland, so next to the rides they had carnival food (there was quite a long line for the funnel cakes), which we normally don’t have back home. 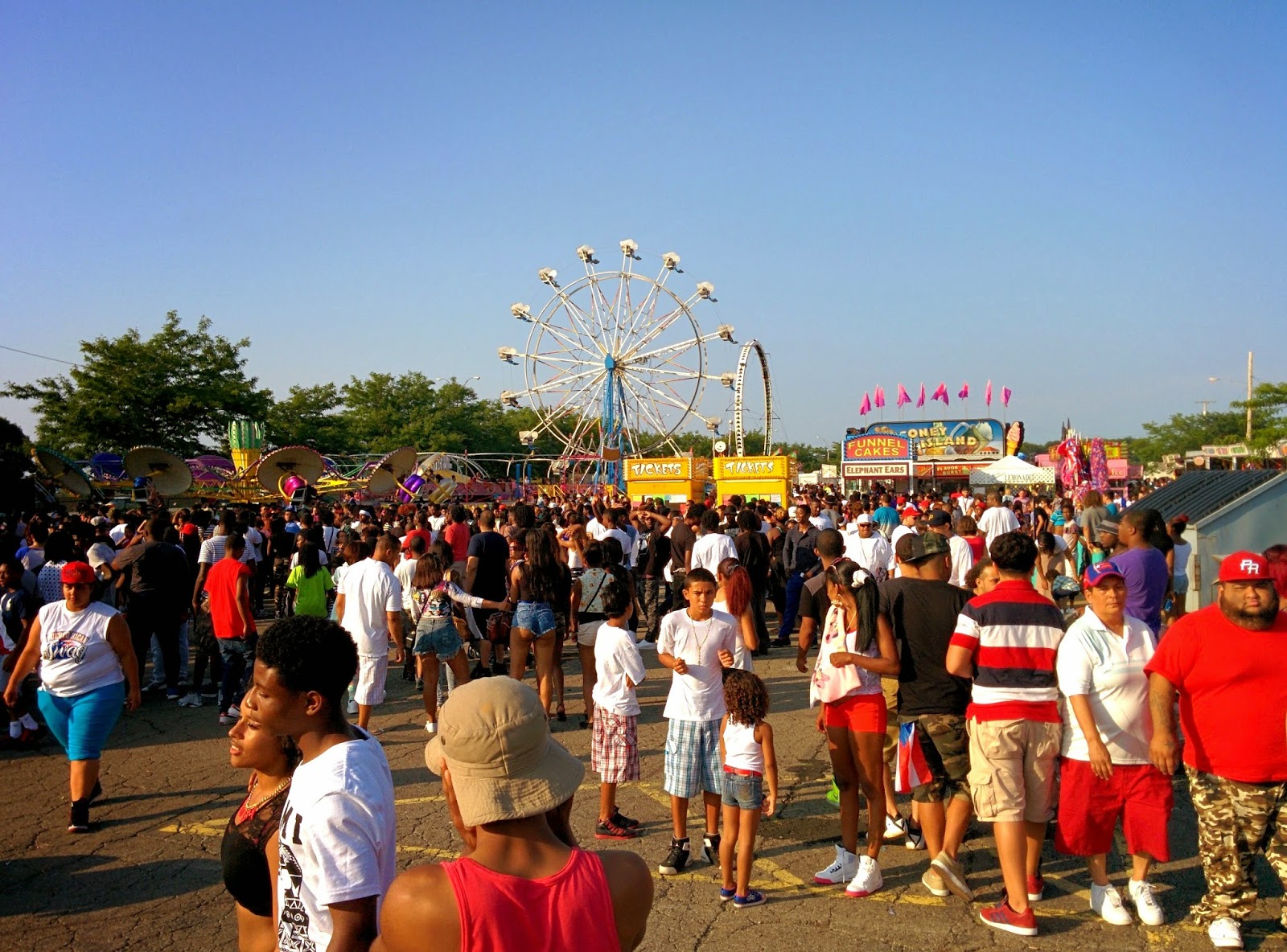 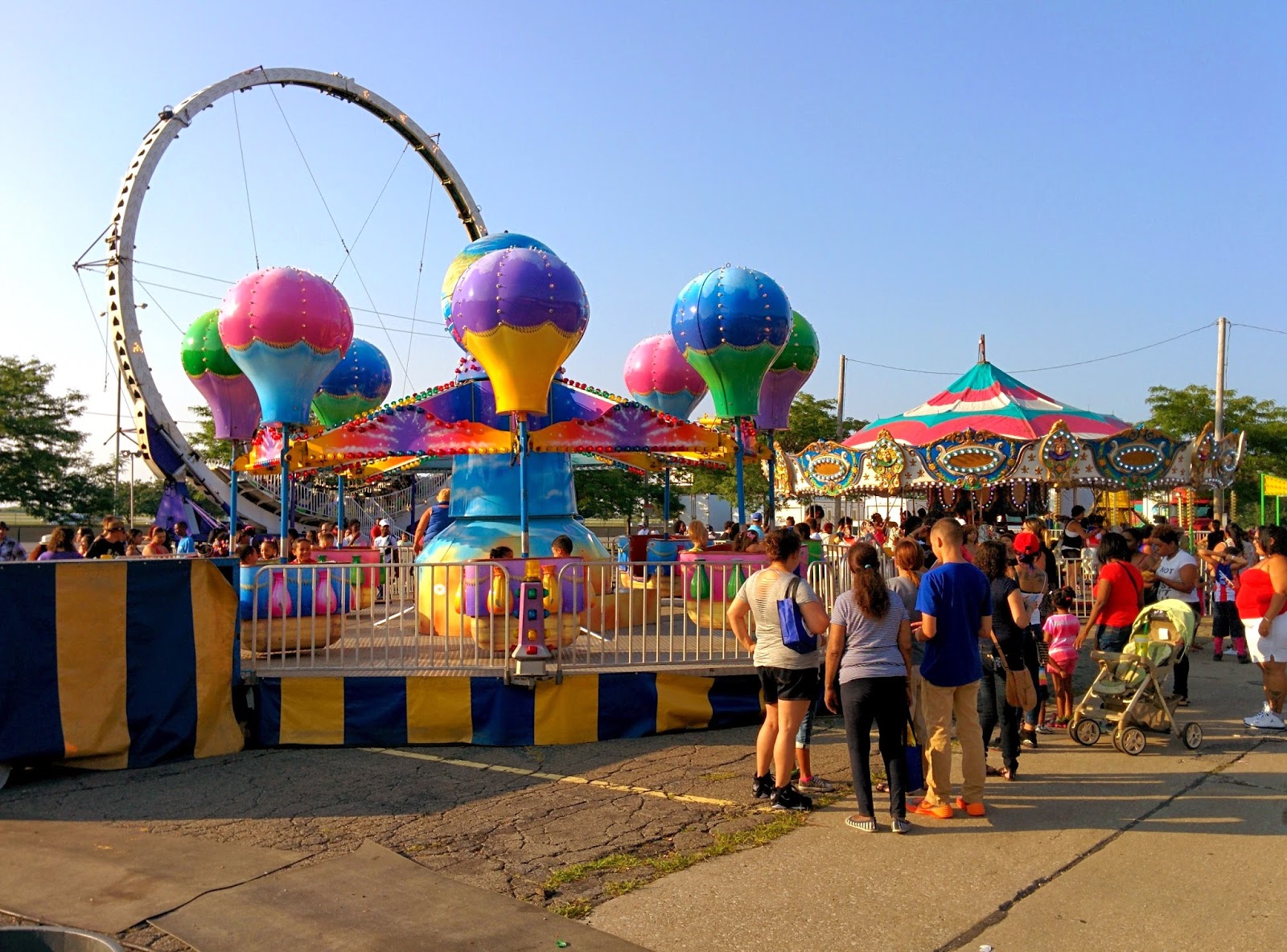 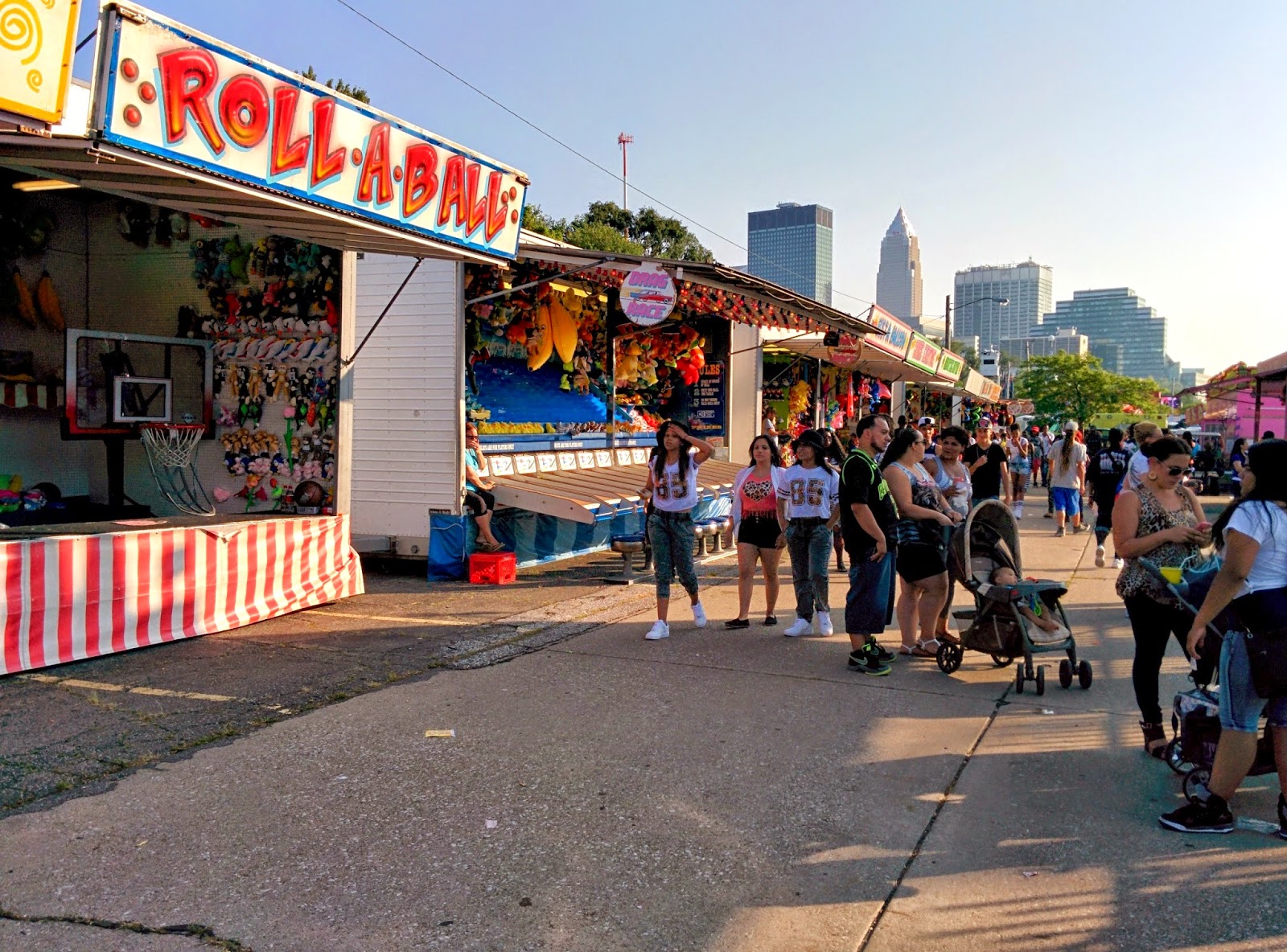 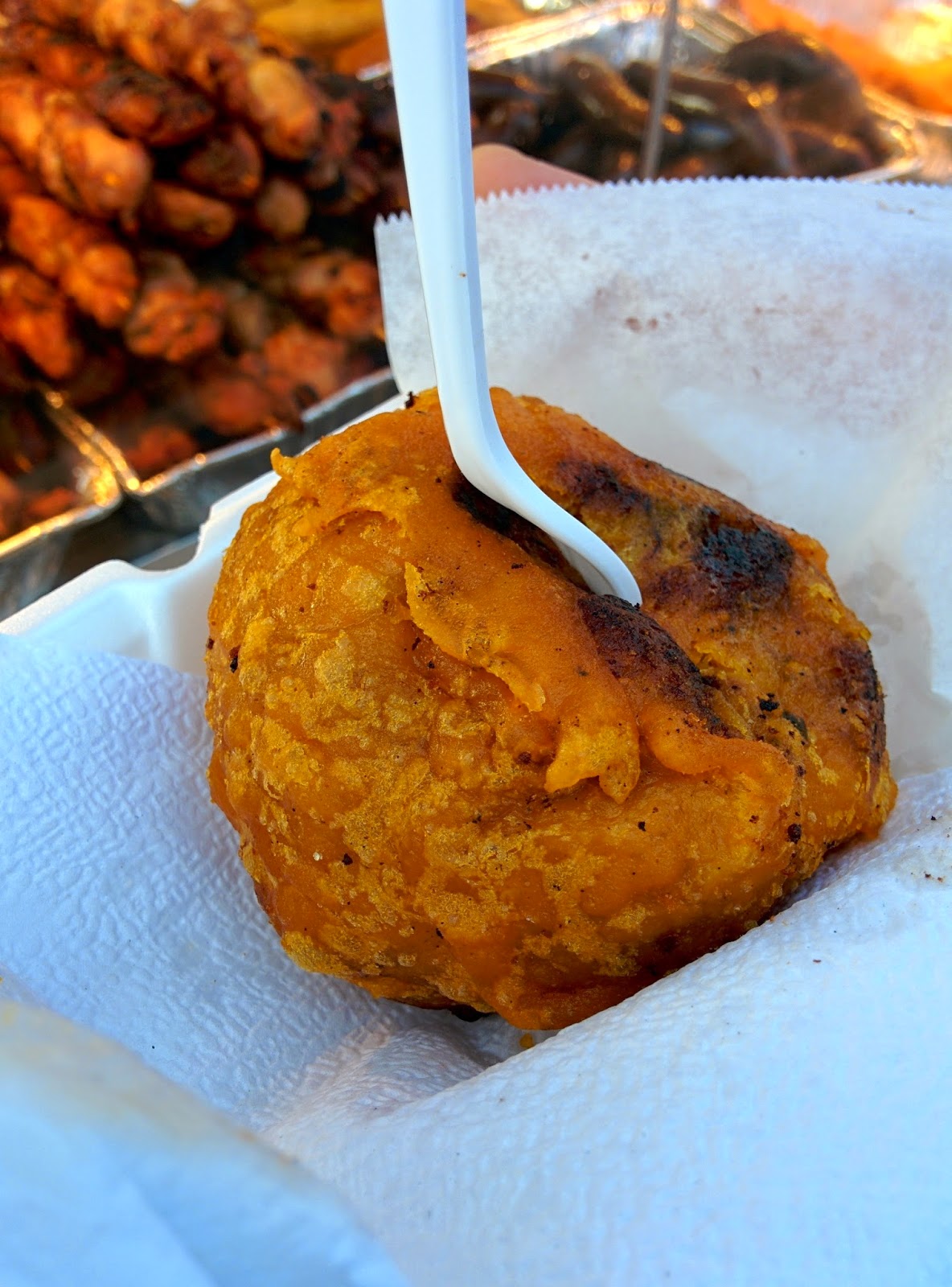 We then had alcapurrias. These are fritters made from different tubers (the so called Spanish roots), plantains and even calabazas (Caribbean pumpkins) and stuffed with ground beef. Then they get deep fried… I almost went Alleluia on them! 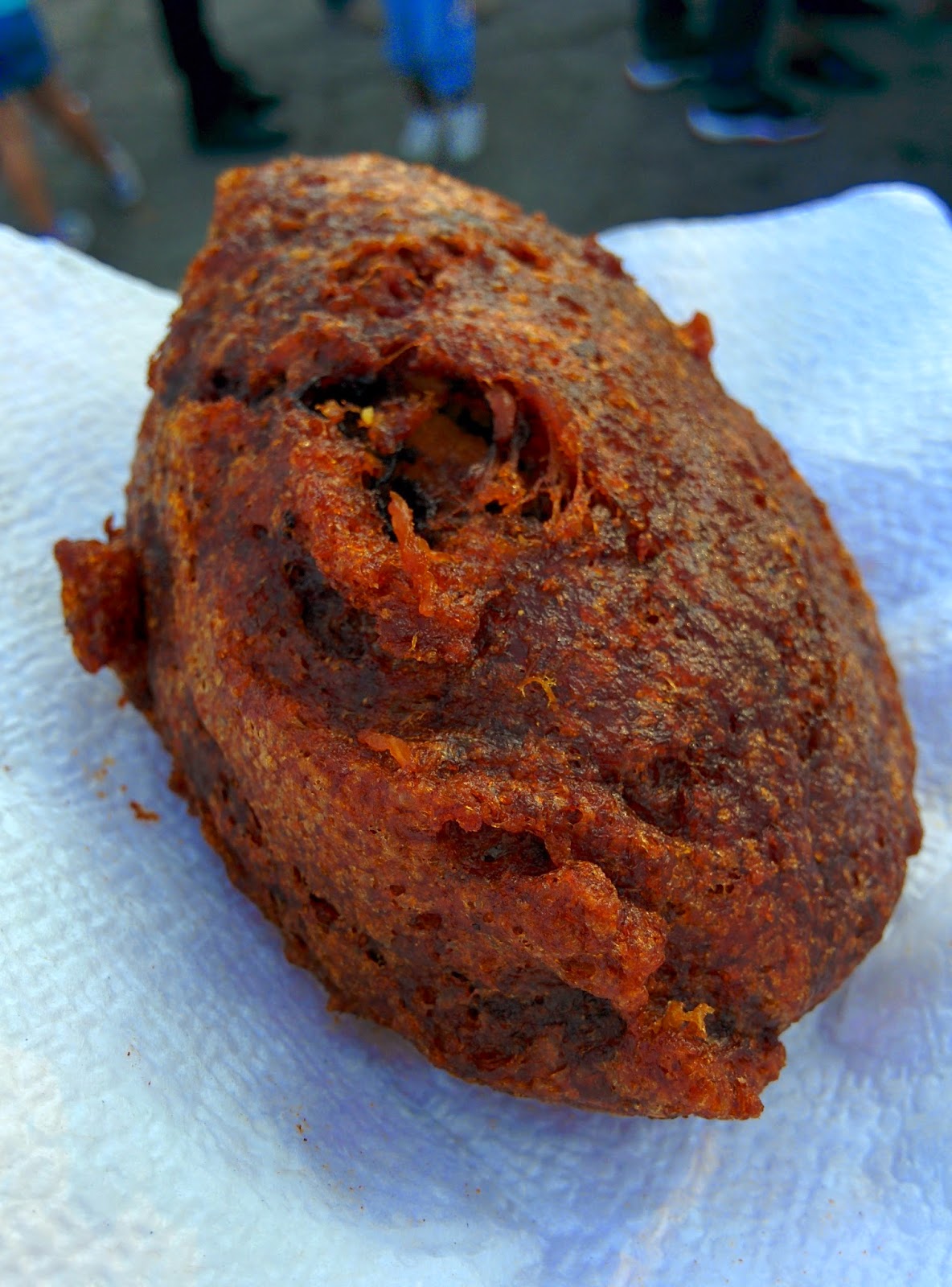 Puerto Rican food has been shaped by its African, Spanish, Taíno and even French heritage. Once our culinary identity was formed, every dish from any other cuisine that dared to enter the country was modified (and some may say perfected) to the local standards. We skipped the pasta and "Italian" fare at the festival, but we ventured into the "Mexican" cuisine and  had "taco". This beauty was a pie/empanada dough, stuffed with shredded chicken, and deep fried. I'm sure that by now you've noticed a trend in the cooking method of choice. 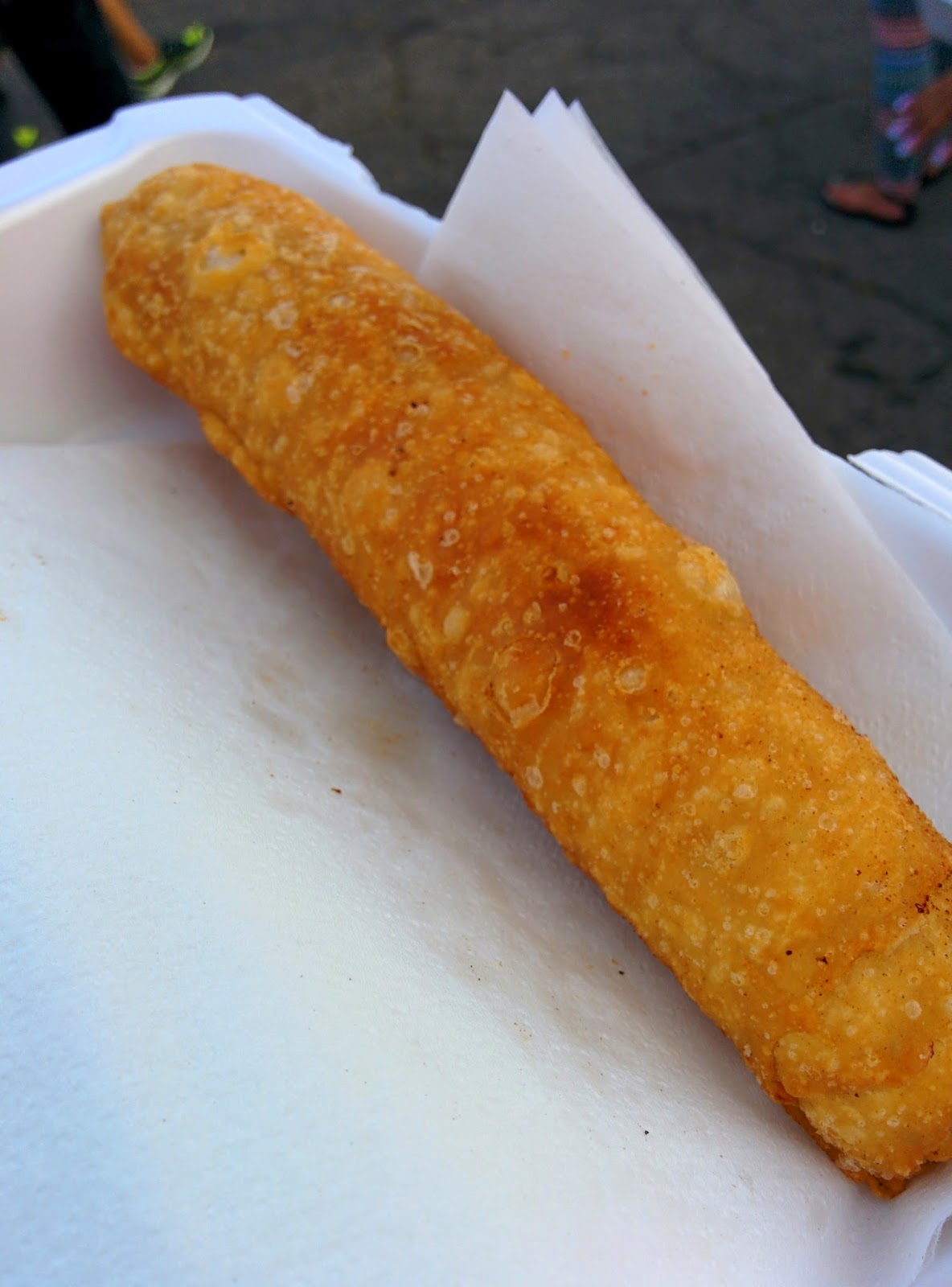 And finally we came across the most beautiful display of Puerto Rican goodness I've seen this side of the Atlantic, and my heart stopped. I stopped too and made a line to buy some more food. 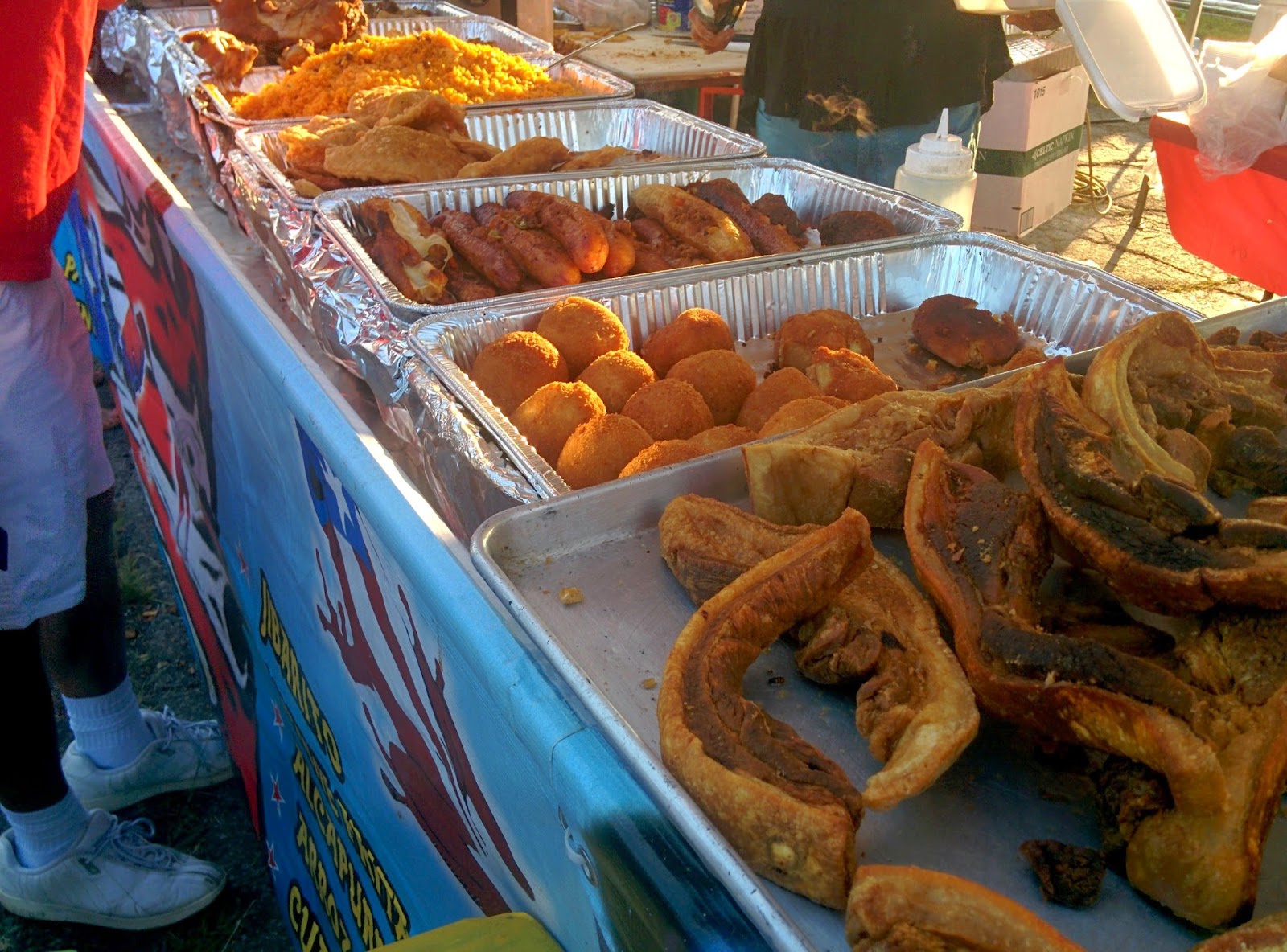 First we got what I’ve been eying for a couple of weeks now, pinchos. These are chicken kebabs that were marinated in mojo isleño, a sauce made from olive oil, vinegar, olives, capers, roasted peppers and bay leaves, and then grilled. The marinade makes sure that the chicken is flavorful and tender. We also had a canoa (canoe), a ripe plantain stuffed with ground beef. I could not be satisfied without having a relleno de papa – mashed potatoes stuffed with ground beef and then deep fried until golden. This relleno was perfect! The flavors were unbelievable.  Finally, our guilty pleasure was to eat chicharrones de cerdo – pork rinds. I’ll leave it at that. 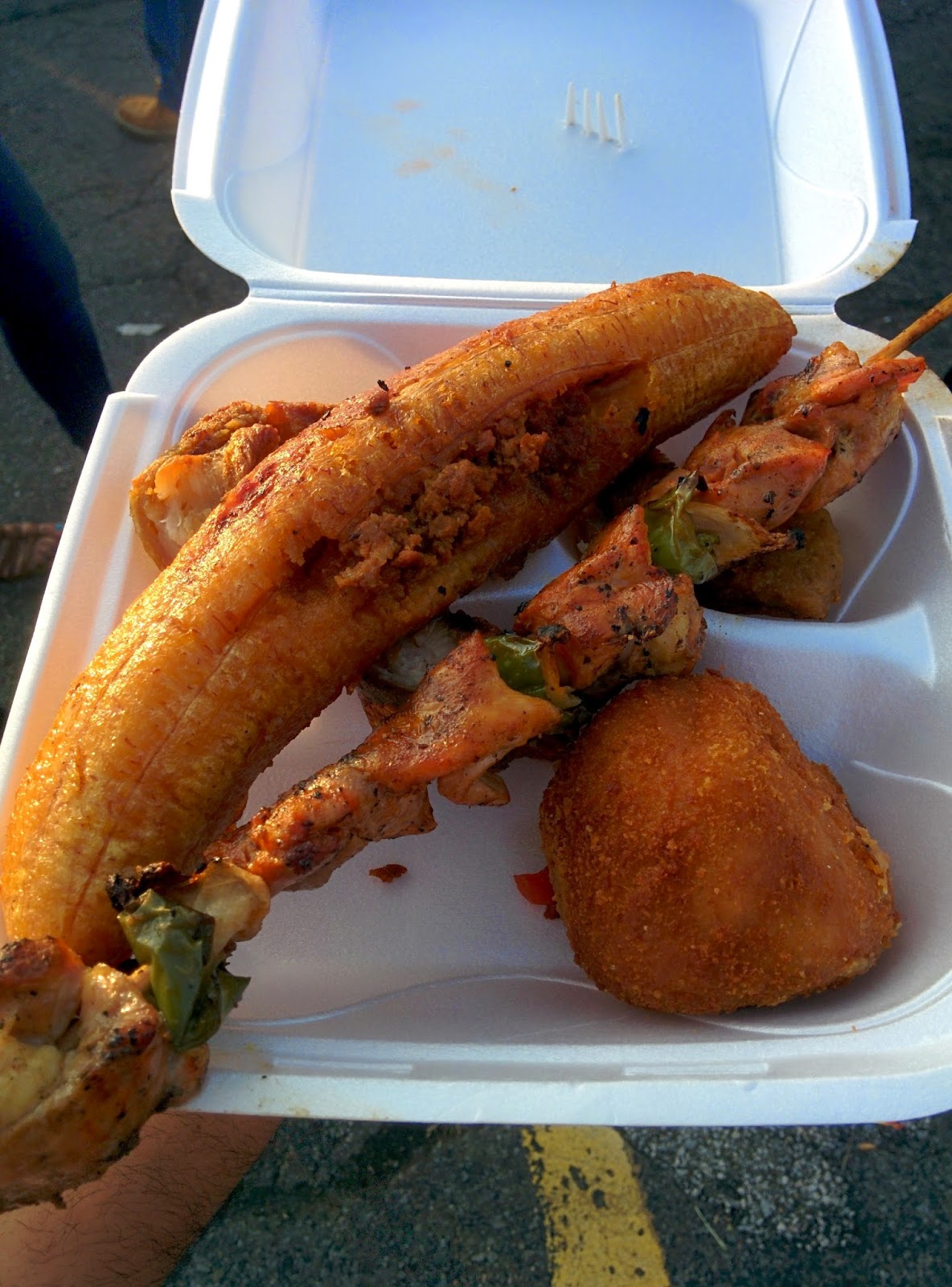 After eating so much amazing food, we watched some of the performances taking place on the two stages. 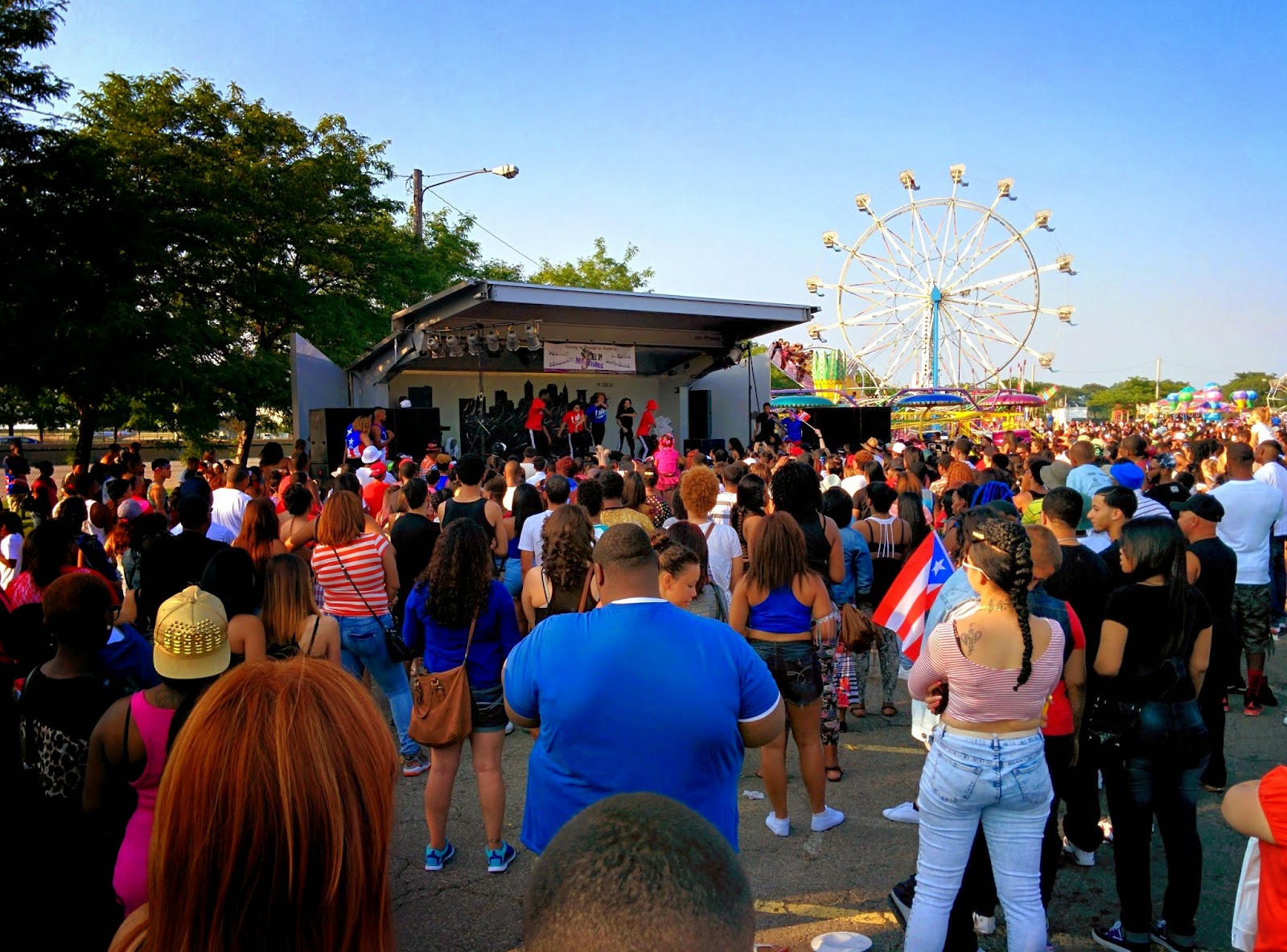 Finally, it was time to go back to the car and head back home. As we went through the parking lot, I came across this nice piece of Puerto Rican pride. A car dressed up in full PR attire, with the name a town written on it, or so I thought. A closer look made me wonder if Puerto Rico has a new town called San Lorenso, or if they were referring to the San Lorenzo they already have. Anyway, leaving the lot was surprisingly easy, just as easy as it was getting in.We really had a nice time at the festival. 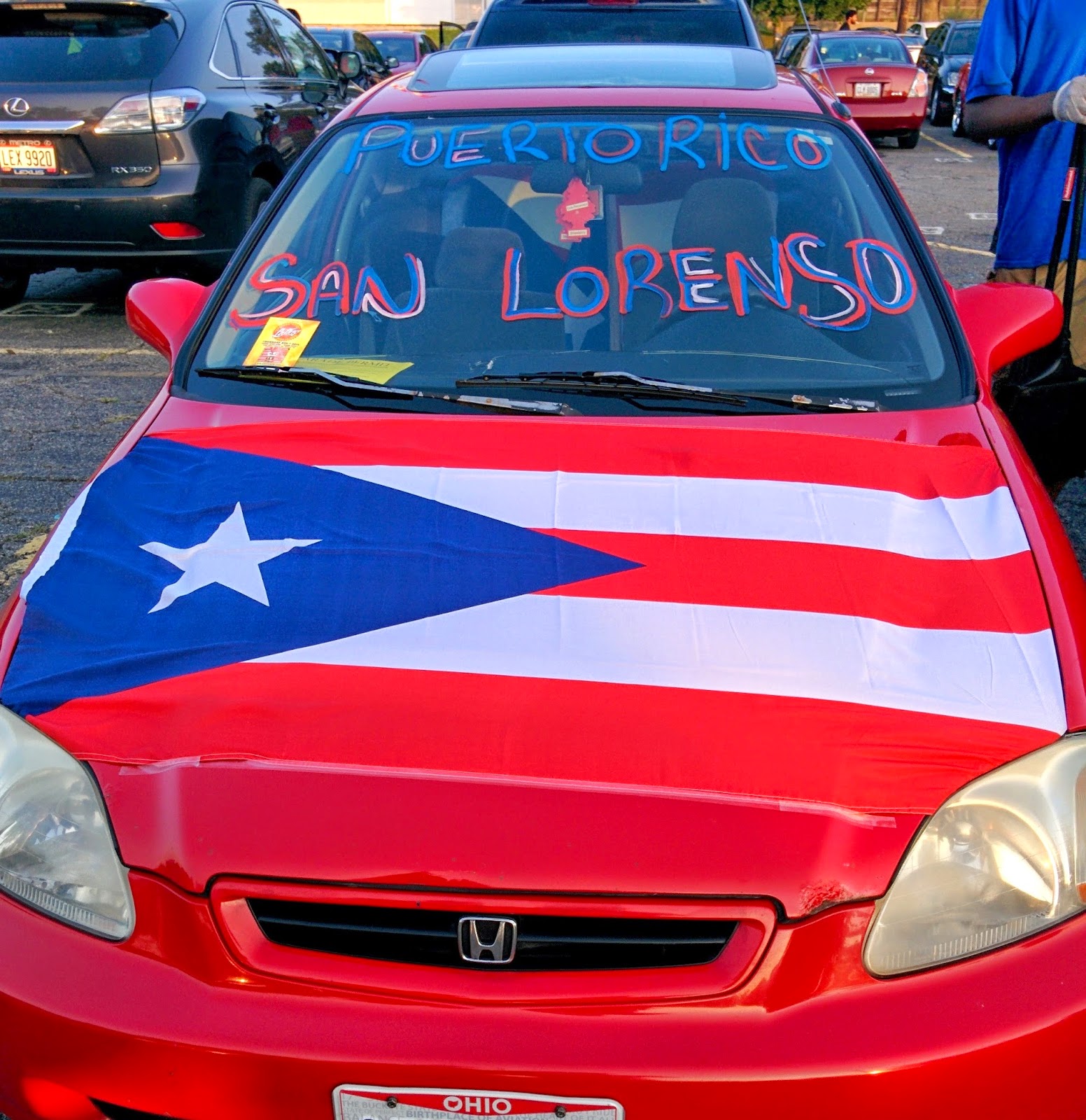