Chronicle of a weeknight dinner

I’d like to start this post by saying that we are having a big loss. Our favorite neighbor is moving to a different city. But despite the sadness of knowing she won’t be close to us anymore, we decided to celebrate our friendship with dinner before the big move. There was a catch though; moving isn’t easy and so she’s pretty busy between now and the big day.  So Tuesday night we made the executive decision that we would have her over for dinner Wednesday evening.  Now it was a matter of giving an every-day dinner a spark of specialness. 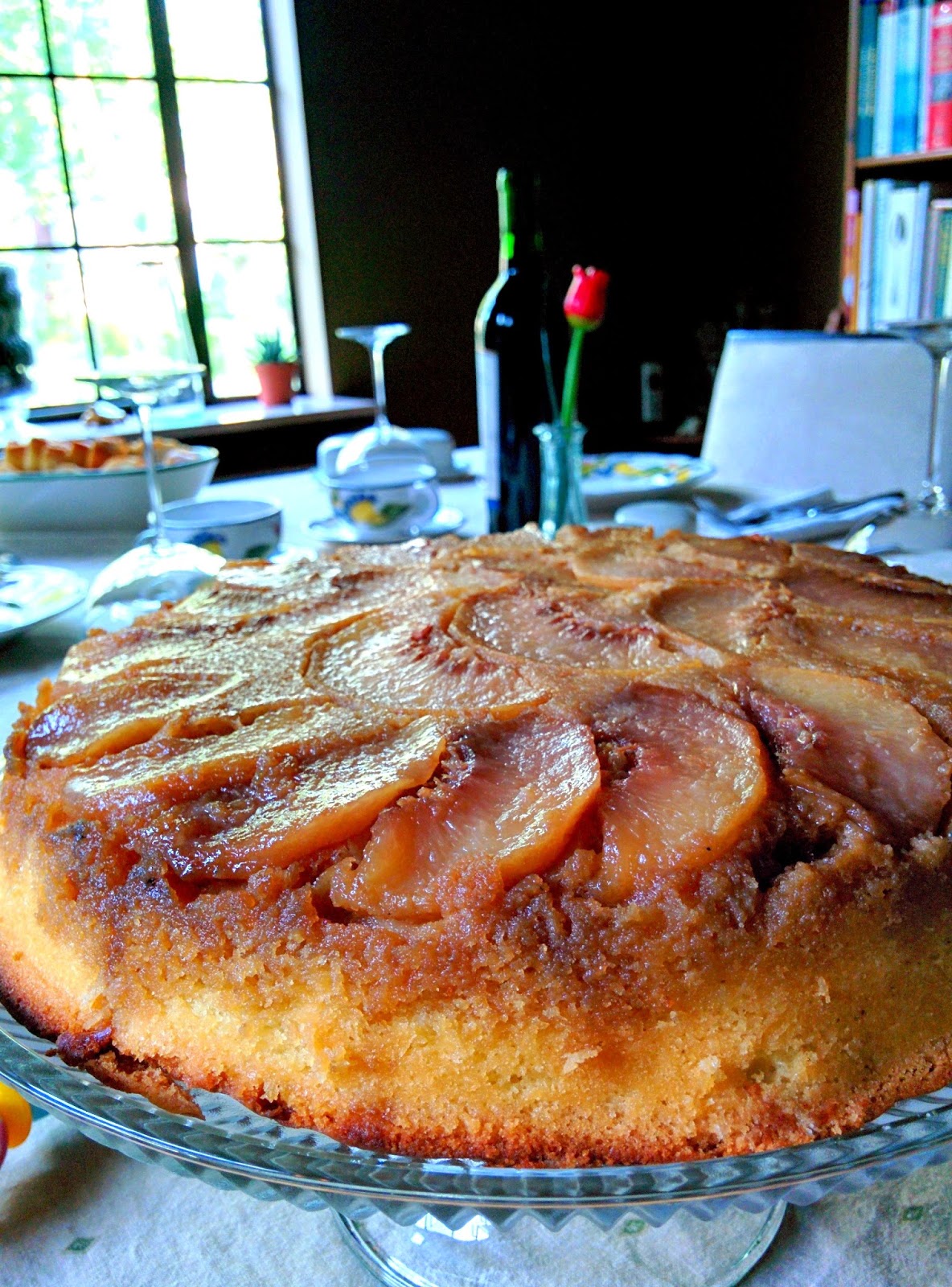 As soon as soon as we decided to have her over for dinner I got started by making the dessert that night. I made a peach upside-down cake using fresh white peaches, and I used peach liqueur and almond extract as the main flavorings for the (pound) cake. I knew I had to decide on the main dish and dessert that night as well. I had boneless ribs in the fridge so the choice was easy. I made a simple mojo inspired marinade from salt, pepper, garlic, rosemary, olive oil and lemon juice. I left them marinating in the fridge and went to bed. 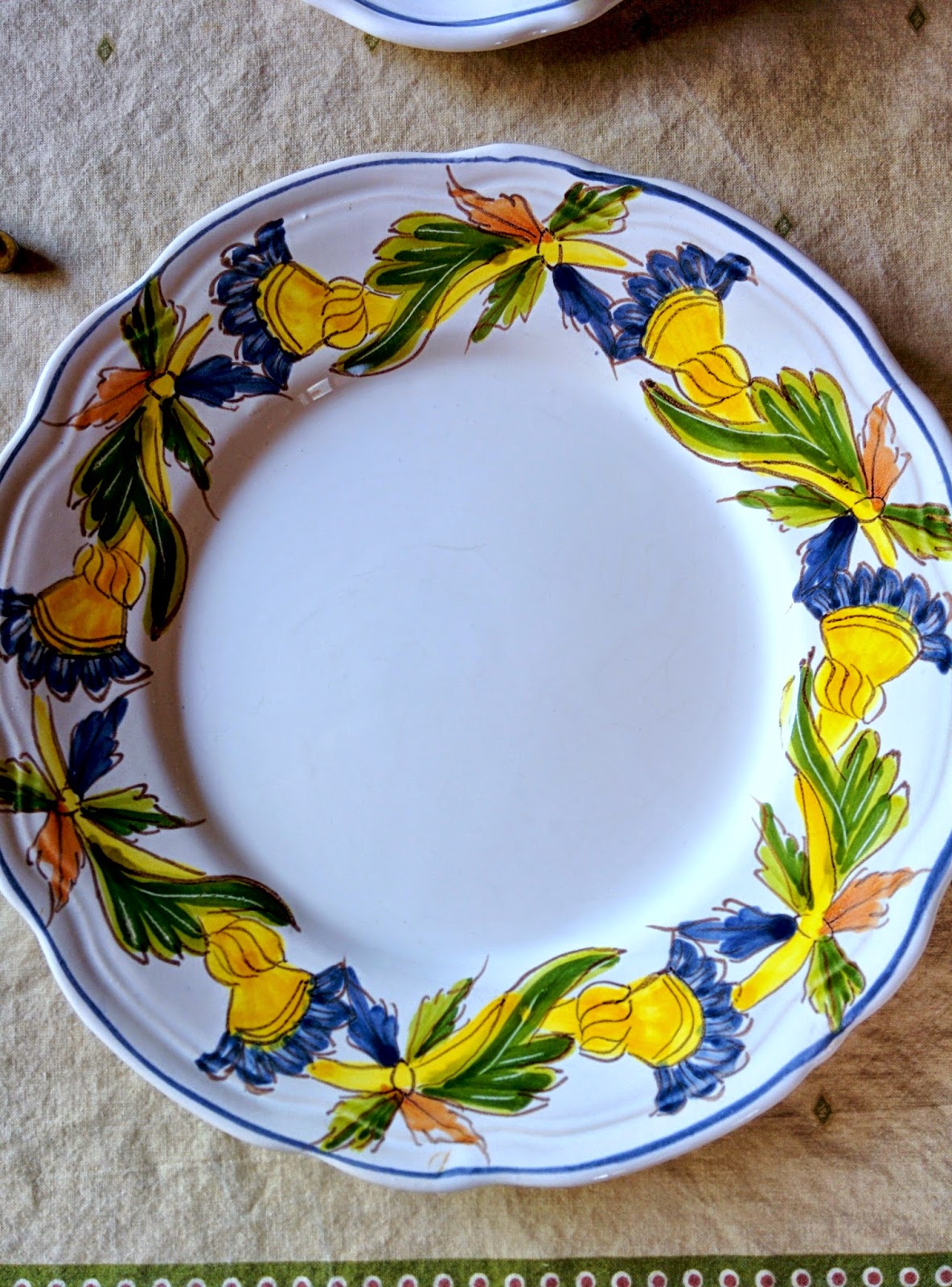 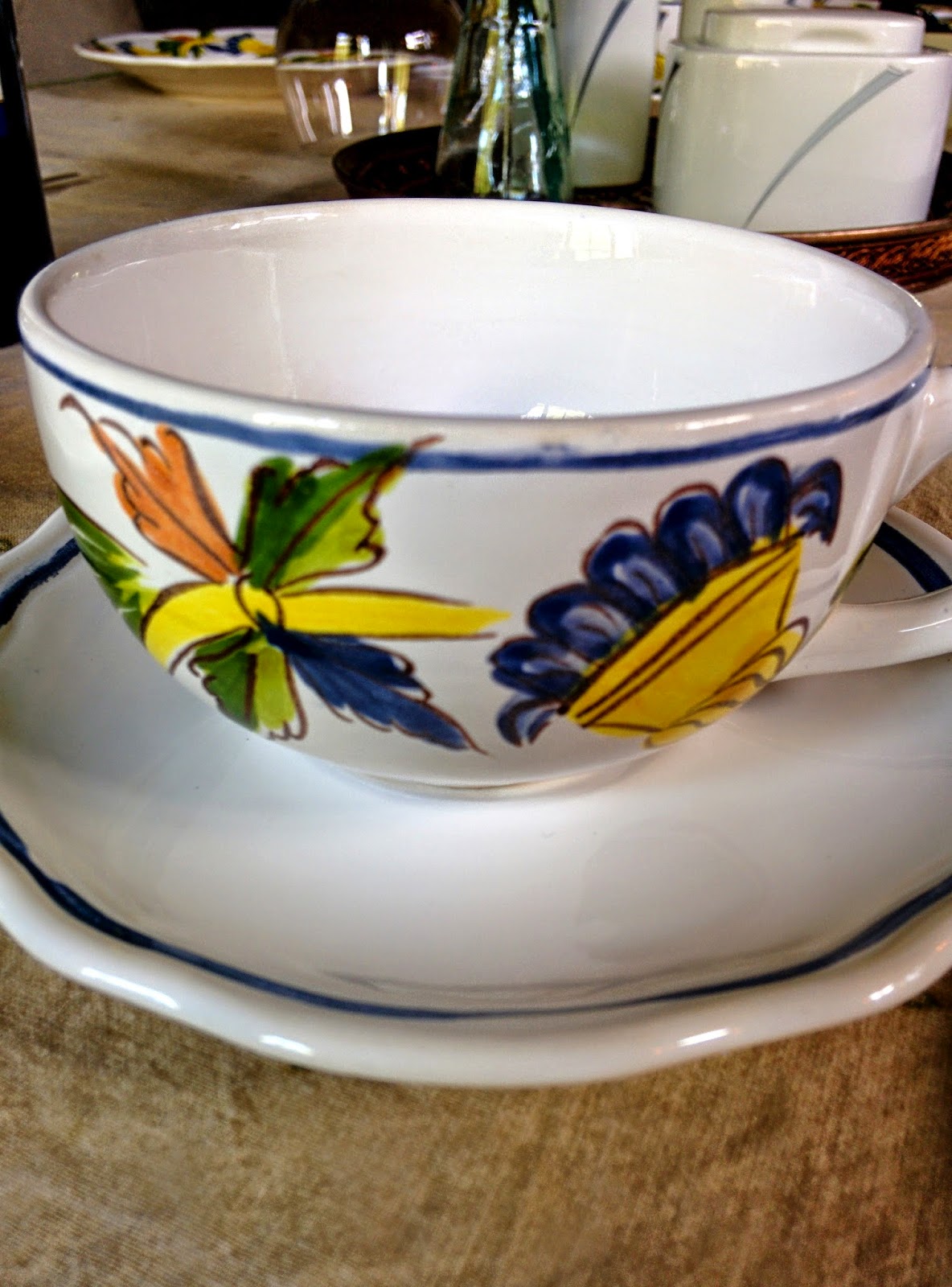 The morning of the dinner I had two tasks. First, I had to wash the tablecloth, napkins and dishes I wanted to use. Then I had to set the table. I did it as fast as I could, and then I went to work. Lucky for me, I'm writing my thesis so going to work meant taking my computer to another room and start working. 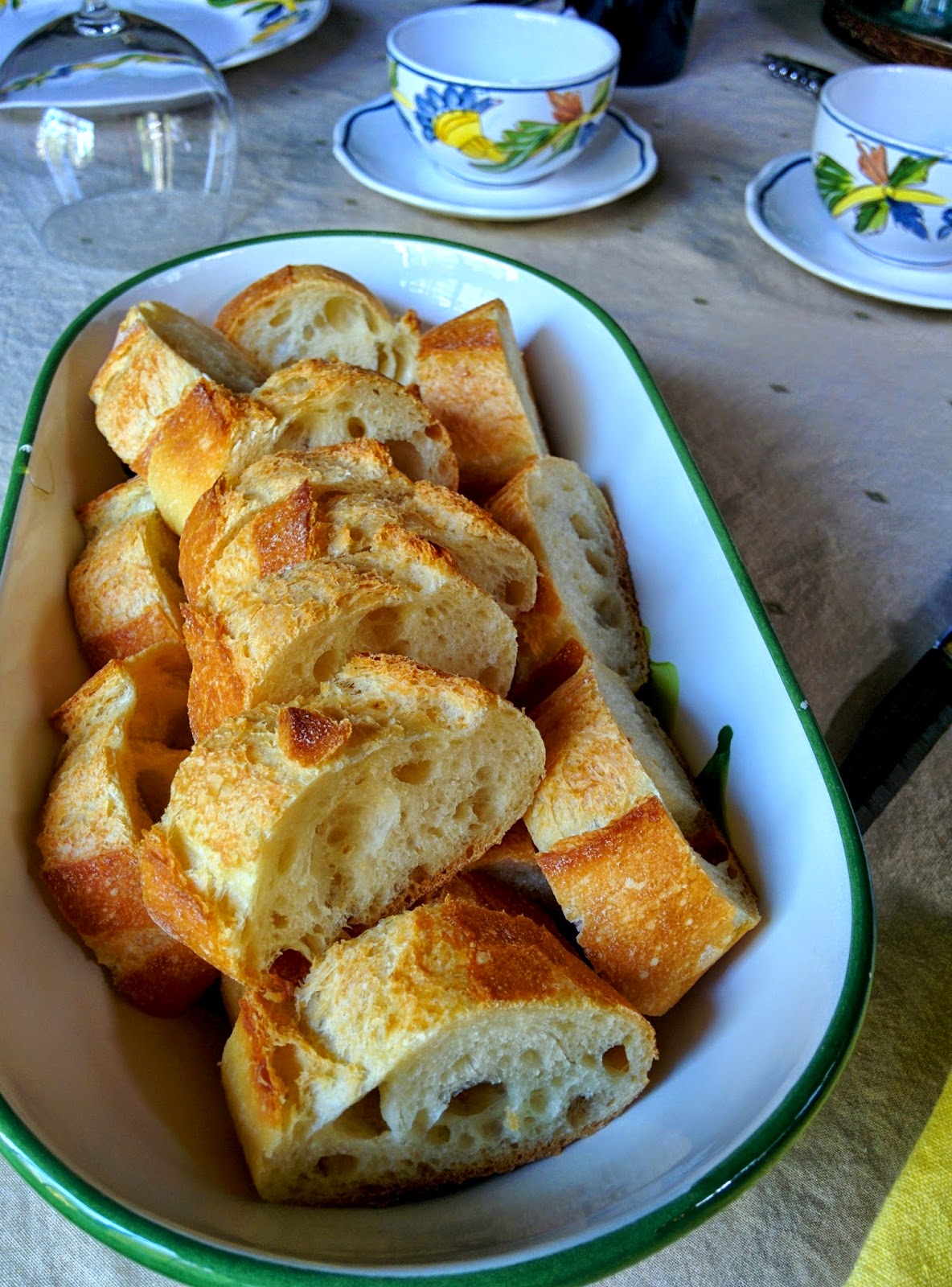 After work, I went on a (short) 16 mile bike ride. On my way home, I stopped at our local panadería (bakery) and got a baguette. Obviously, you can’t have dinner without fresh bread… 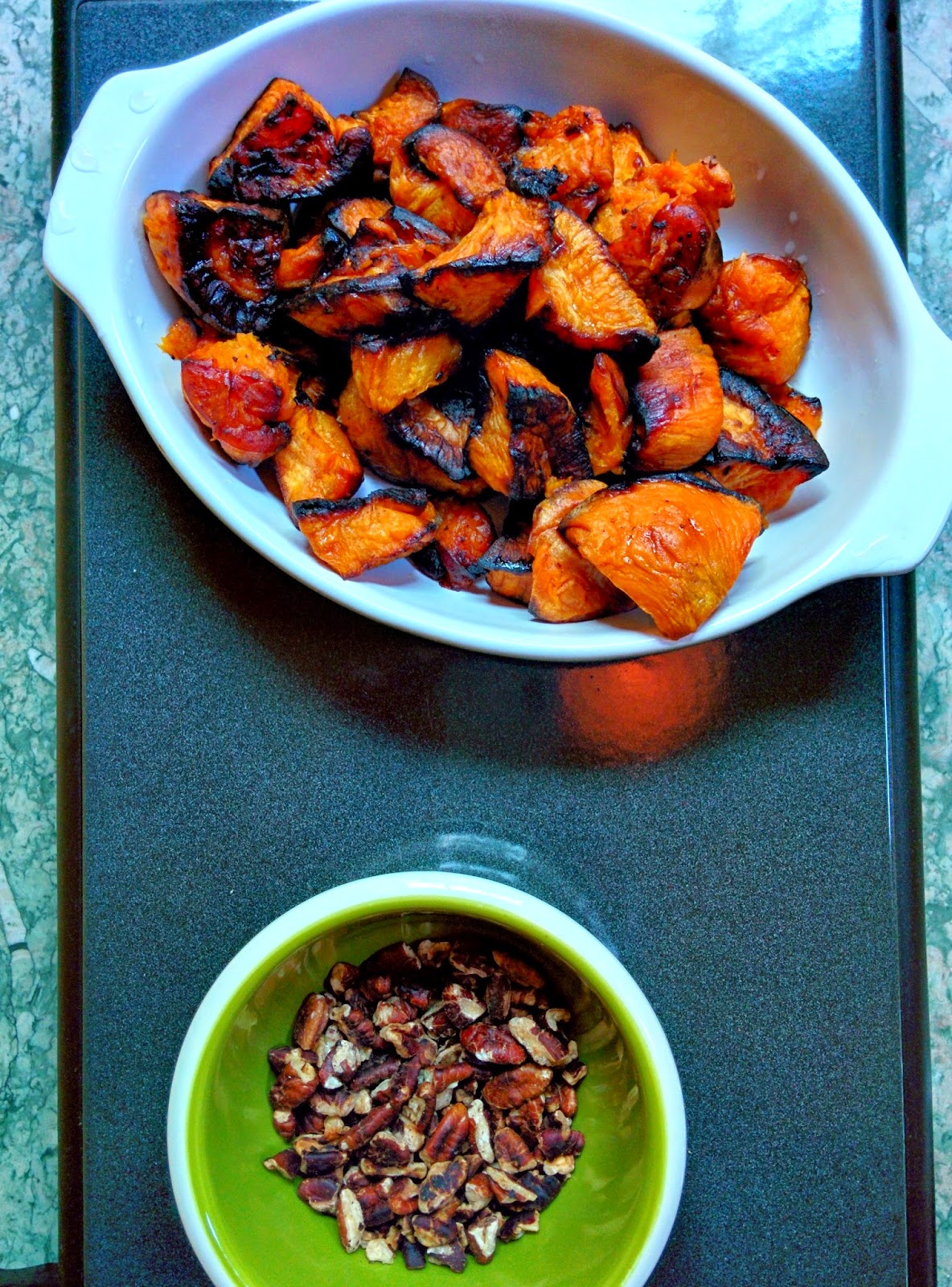 Once at home, I started working on the side dishes. I open a jar of red cabbage with apples to serve on its own. I’ve had it many, many times and its one of the few items I dare to serve directly from a jar/can because I love the flavor so much. Sadly, this jar was not that good… At least that was the biggest problem I had all day so I won’t dwell on it. The dish I did cook turned out really good. I made a decomposed version of one of my favorite side dishes: sweet potatoes with butter, pecans and sugar.  I cubed 2 sweet potatoes into 1-inch slices and tossed them in a mixture of olive oil and butter. I seasoned them with salt, and baked them at 350F, tossing every 10 minutes or so. They were ready after 35 minutes of roasting. In the meantime, I roasted pecans on the stove, and I served brown sugar on a small dish. They were meant to be added at the table over the sweet potatoes. Once the sweet potatoes were ready, I covered them and kept them on a heating plate until we were ready to eat. 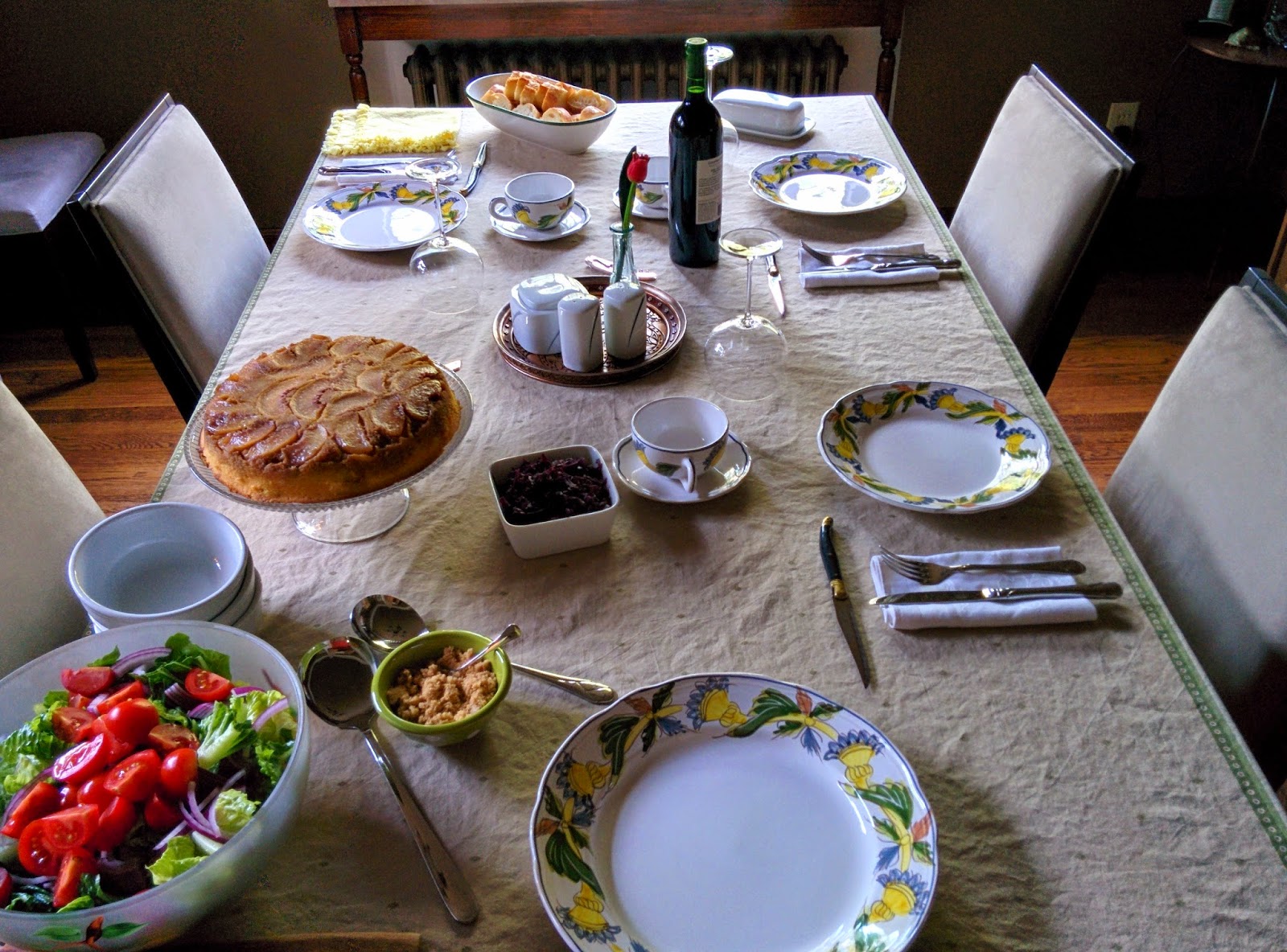 The next step was to make a salad. This one was simple: lettuce, tomatoes and red onions. My go-to dressing is olive oil and lemon because that's what I inherited from my Mediterranean ancestors. I was about to make it but at that point Calin had made it home. If he could get away with it he would never, ever eat a salad with that light dressing. So, he took over and made his famous salad dressing whose recipe remains secret. We brought it to the table and kept it cover until 10 minutes or so to dinner time. 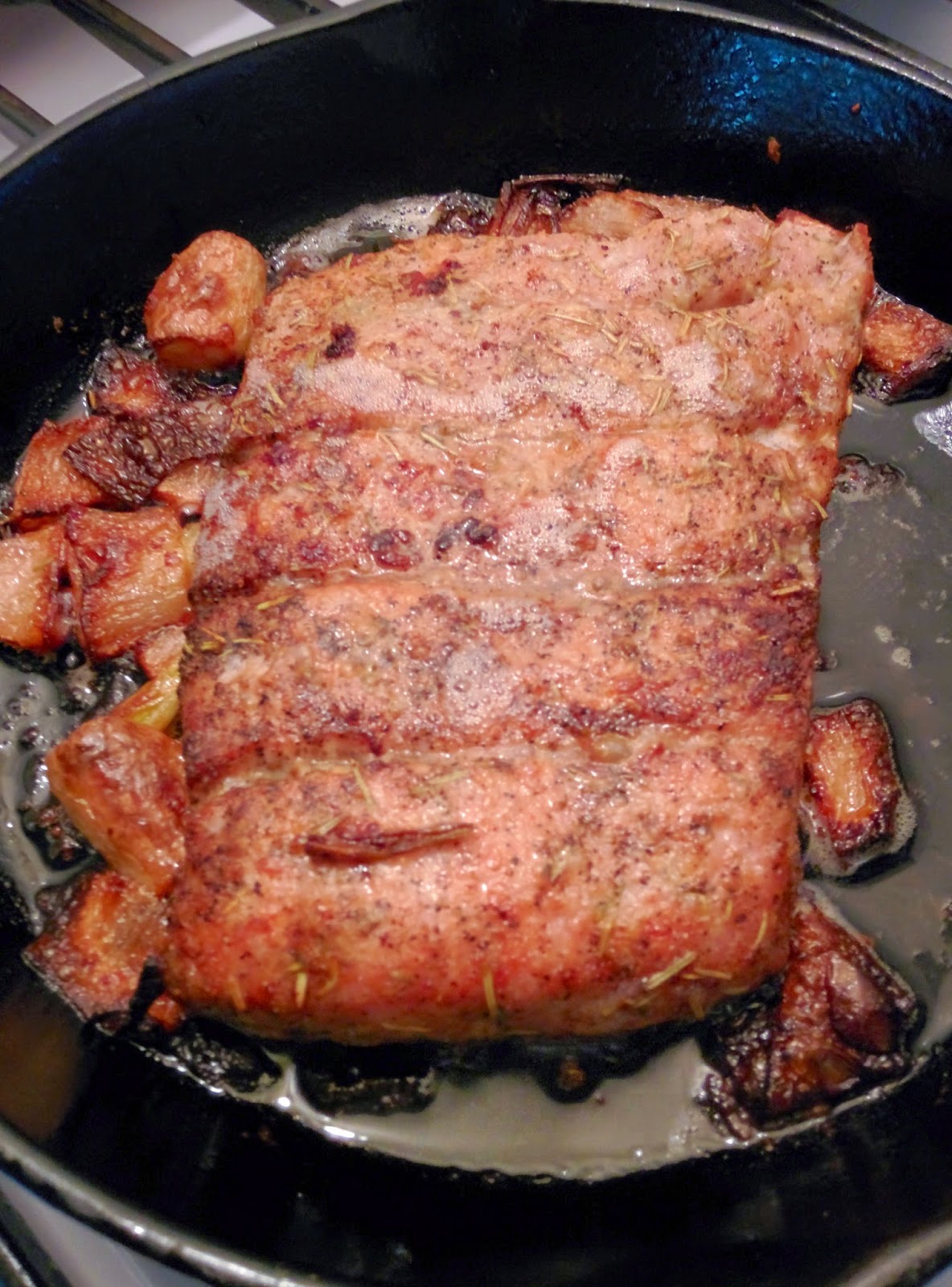 For the meat, I had a very simple plan. I removed it from the fridge 45 minutes before cooking it. I pat-dried the marinade off the ribs. In the meantime, I heated an iron skillet with grapeseed oil. Once hot, I seared one side of the rib slab for 3-4 minutes. While waiting I peeled 3 cloves of garlic and I sliced a shallot into quarters. Once I flipped the ribs, I added the whole garlic and the sliced shallot and cooked for 3-4 minutes. I topped the ribs with 1 tablespoon of butter, and I transferred it to the oven and roasted at 350F for 1hr, basting it every 20 minutes. I took a picture of the ribs while I was basting them, but that was it for the pictures. I didn’t have time for pics anymore. When it was cooked, I let the slab rest for 10 minutes, sliced it, and served it on a platter lined with fresh thyme and topped with fresh rosemary. I kept it in the oven (OFF at this point) until we were ready to eat! The shallots and garlic were there just for flavoring the basting oils, so I did not serve them (I did eat the garlic while getting things ready…).

We had a great evening enjoying each other company.  The food turned out well, but most importantly, we were able to celebrate having such a great neighbor for such a long time. We’ll miss her, but we are happy she’s moving on to better things, and we are excited to get to visit her in the future.

I may add the recipes for the food on this post later on (during the weekend). Write me a comment if there’s one in particular you want to make sure I add.

Preheat the oven to 350F. Use some butter to grease a cast iron skillet. Melt the rest of the butter, and spread it through the bottom of the pan. Spread the sugar over the butter. Arrange the peaches over the sugar in a single layer.

Use a mixer on medium high to cream the rest of the butter with the sugar and salt until it’s pale and fluffy (about 3 minutes). Add the eggs slowly so they incorporate into the batter. Add the peach liqueur, and the almond extra and mix until everything is incorporated. Lower the speed to medium low and add the flour until incorporated.

Very carefully, pour the batter over the peaches. Bake at 350 for 45 min – 1hr or when a toothpick comes clean.
Note: I love the almond flavor because I feel it goes well with the peaches. 1 teaspoon will make it very almond-y. For a less robust profile use ½ teaspoon of almond extract, or substitute it for 1 teaspoon of vanilla extract.