I've been waiting for the good news for a while. You may or may not know this, but I'm a huge fan of Xena, Warrior Princess (and I've got the merchandise to prove it). In high school some kids (OK, most kids) called me Xena because of my hardcore devotion to the show. I had action figures, trading cards (which I never traded), comics, coloring books, actual books, CDs, VHS tapes, video games, posters and pictures, a t-shirt, and even a kite (who does that?). You get the picture: I was a nerdy fan, and I was proud of it. So, naturally the saddest day of my life was when I found out the show was going to end (in 3 years) and my life was never the same... so sad... (Why did you spoiled my innocence, you comic-store guy?)

Recently, Lucy Lawless a.k.a. Mrs. Xena herself, tweeted that she received an interesting call about reviving the Xena franchise, although it would have to be in a different form. My poor little heart came back to life, wondering when would my biggest dream come true. I imagined something like a Netflix original series or something of the sort, and started imagining all the different scenarios and story lines possible. To this day, I don't know what that tweet was really about, but my heart went like "oh, no..." when I realized that the newest "Xena Project" around is a Xena Porn Parody! I guess that's flattering (?) and shows there's still some interest in Xena, right?

All re-inventions and reinterpretations of the classics don't have to be so... hum...controversial (or naked). I was certainly hoping that wouldn't be the case with the goulash I was about to make. I have eaten goulash several times, but I have never made it myself. It was finally the time for me to pay homage to a classic and I was determined to make all the Hungarians and other Eastern Europeans who have been eating goulash for generations proud, but without the bad acting or the getting naked part getting in the way. I was so serious about making this goulash that I even forced myself not to use my Spanish paprika and went for the Hungarian one instead.

Of course, making this dish takes some time (about 3 hours to be more precise) but it's not really too labor intensive. After all, there's 2 hours of simmering (in the oven). First I started by seasoning the meat using salt, pepper and paprika. According to "America's test kitchen" the flavors are deeper this way, as opposed to adding paprika only to the whole stew later on. After seasoning, I browned the beef in oil using a Dutch oven. I used beef stew-meat but you can start with a chuck roast and cut it into 1 1/2 inch-square pieces yourself. Just be sure to remove the excess fat. 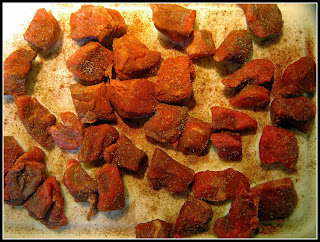 I removed the beef from the pot, added more oil and sautéed minced onions, adding salt and paprika. After they were cooked (5 minutes or so) I added minced garlic and tomato paste, followed by flour and chicken broth. When it started simmering I covered and transferred the Dutch oven to the oven, and cooked at 300F for 1 hour and 20 minutes. At that point I added chopped Ancient peppers, and returned it to the oven for an additional 40 minutes. I removed the pot from the oven and took half a cup of the stew's liquid and used it to temper low fat sour cream before adding it to the stew in the Dutch oven. I stirred it in, and I also stirred in some chopped parsley. 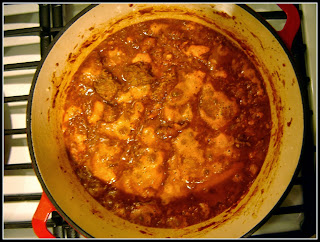 I served my goulash with brown rice. That may not be the most traditional way of pairing goulash, but it is the one that makes the most sense to me. I just boiled brown rice in chicken broth, and it was ready in about 40 minutes. 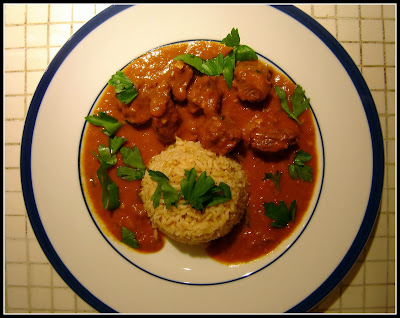 I loved the taste of the goulash so much!!! It was rich, and hearty, and very authentic tasting. I could even eat the sauce on its own! The rice was perfect and delicious as well. The best part is that this recipe has only 495 calories per serving, and it brings a good 40 g of protein with it (awesome!). Oh wait, I guess I was wrong; the best part of making this dish is that there were leftovers! Guess what's for dinner! Battle on!

(Yes, that last part was a Xena reference.) 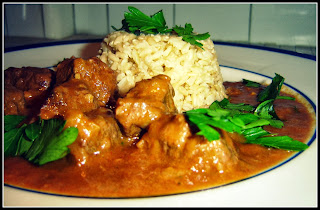 Pat-dry the beef thoroughly with paper towels. Season the beef with salt, pepper and 2 teaspoons of sweet paprika. Heat 1 tablespoon of oil in a Dutch oven over medium-high heat, and use it to brown the beef on all sides, about 10 minutes.

Remove the beef, and add the remaining 1 tablespoon of oil to the Dutch oven until shimmering. Add the onions, 1/2 teaspoons of salt, and the remaining 2 tablespoons of paprika. Cook until the onions are soft, about 5 minutes. Stir in the garlic and tomato paste and cook for 30 seconds. Stir in the flour and cook for 1 minute. Slowly stir in the broth, scraping off brown bits, if any. Stir in the browned beef (along with the realesed juices) and bring to a simmer. Cover and transfer the pot to the oven (medium-lower position) and cook for 1hr and 20 minutes at 300F.

Stir in the peppers. Cover and return the pot to the oven for 40 minutes (the beef will be just tender). Remove the pot from the oven. Whisk 1/2 cup of the stewing liquid into the sour cream and add the sour cream mix to the stew. Stir in the parsley, and add salt and pepper if needed.