Oktoberfest is coming! Well, in Cleveland it already came in August, and it's gone by now. Sadly, even my best friend's efforts to take me and celebrate it a month ago did not result in me taking part of the festivities. Not that I had anything against going or anything; I mean, do you really think I need an excuse to go out and drink beer? No, I don’t; but I was busy and I couldn't go. Well I guess that as strange as it sounds, I may have to celebrate it now, closer to (gasp) October.

We don't have many foods that are sour in our cuisine, at least not that I remember. So, when people eat sauerkraut, they just use a teaspoon to top a hotdog, and that's the end of it. My mother may remember this better than me, but I think that as kids it took a bit of convincing for us to eat the poor sauerkraut. So she decided to make eating sauerkraut “cool” and “fun” and started telling us that the sauerkraut was a fancy Italian onion (cebolla) and we started pronouncing the name as if it was Italian (cebollini). We finally started eating the sauerkraut, and all was well... That is, until I went to buy a hot dog and had to ask for it myself. Imagine the hot dog guy's face when I asked for the cebollini and he had no clue as to what I was asking for. Even worst, picture my face when I was told that was cabbage… Sadly, I wasn't a kid when this incident happened so it wasn't cute at all; it was just sad, very sad.

Turned out we don't have a fancy name for sauerkraut. We simply call it repollo (cabbage). No one gets confused (but me) since we barely eat cabbage anyway, except for an occasional slaw, and as an ingredient for sandwiches. To this day, I still don't eat much white (or green) cabbage, but I do eat a lot of red cabbage. I love red cabbage. I eat it fresh, in slaw, braised; you name it I eat it. I've been eating red cabbage so much lately that I had an accident cooking it a few months ago. I sliced off the tip of my finger shredding red cabbage. Thankfully, even though I don't watch Grey's Anatomy per sé,  I've heard enough episodes from a safe distance that I was able to get the pieces back together and I fixed my finger myself (sorry about the visuals). Anyway… This weekend we had friends coming over for dinner and I thought we could have some sweet and sour red cabbage with sautéed pork chops.

I started by frying bacon. I used the bacon drippings to sauté the onions for a couple of minutes, and then I added cubed red cabbage, and coated it with the drippings. I added water, red-wine vinegar, sugar, salt, pepper and caraway seeds. I braised the cabbage covered at low heat for 35 minutes. Half way through I added half of the bacon (chopped) and I used the other half to garnish the dish at the end. 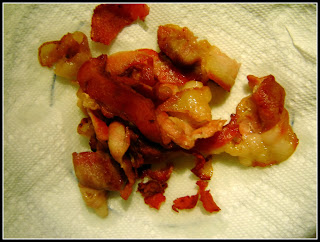 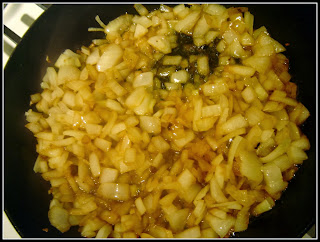 In the meantime, I made the pork chops. I seasoned them with salt and pepper. Since I wasn't using any more condiments, I seared the pork chops in a tablespoon of butter to get that flavor as well. After searing, I transferred the chops to a shallow baking dish and roasted them for 8 minutes at 450F. 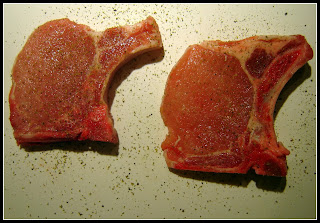 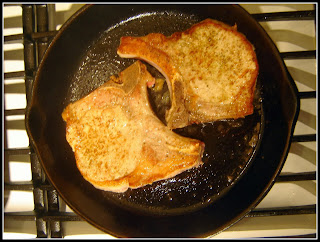 It was kind of funny, but just like in the cooking shows, as the timer went off our friends arrived. Is there a better way to receive someone than with pork chops? I don't think so. We had a chance to catch up while enjoying a delicious meal. 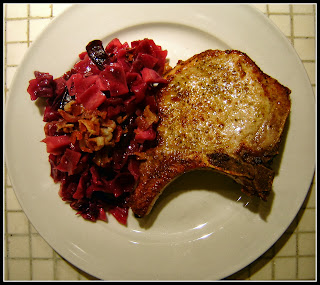 The pork chops were great, but the star of the night was the cabbage. The taste was great, the texture was beautiful, and the aroma was excellent. I know what you're thinking: "hey, how is this healthy? I heard bacon, pork chops and butter". Well this dish has only 505 calories, and it's rich in protein. I liked it so much and though it was so good for me, that I made it again the next day! 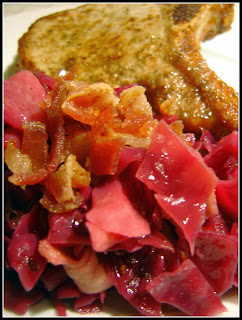 Put oven rack in middle position and preheat oven to 450°F.
Cook bacon in a 4- to 5-quart wide heavy pot over moderate heat, stirring occasionally, until crisp, and transfer with a slotted spoon to paper towels to drain. Measure fat and, if less than 2 tablespoons, add enough vegetable oil to bring total to 2 tablespoons. Heat fat over moderately high heat until hot but not smoking, then cook onion, stirring occasionally, until it begins to turn golden, about 2 minutes. Add cabbage and turn with tongs until coated with fat. Stir in red-wine vinegar, water, sugar, caraway seeds, 3/4teaspoon salt, and 1/4 teaspoon pepper and braise cabbage over moderately low heat, covered, stirring occasionally, until tender, 25 to 35 minutes.
Meanwhile, pat 2 pork chops dry and sprinkle both sides with 1/4 teaspoon salt and 1/4 teaspoon pepper (total). Heat 1 tablespoon oil (I used butter) in a 12-inch heavy skillet over moderately high heat until hot but not smoking, then brown seasoned chops, turning over once, 5 minutes total, and transfer to a shallow baking pan (1 inch deep). Season remaining 2 chops and brown in oil remaining in skillet in same manner, transferring to baking pan. Roast chops in oven until thermometer inserted horizontally 2 inches into center of a chop (do not touch bone) registers 145°F, 5 to 8 minutes.
Meanwhile, stir half of bacon into cabbage, then finely chop remaining bacon for sprinkling.
Let chops stand in pan, loosely covered with foil, 5 minutes. Serve chops over cabbage, with any pan juices spooned over and sprinkled with bacon.