OK, so fall is here. I know I’ve been whining for quite a while about how much I would miss the summer, the fruits and so on. Please, don’t take my whining so seriously. The truth is that I do like fall. What is there not to like? We get pretty colors, nice cool temperatures, concerts, the theater season, and most importantly, my favorite holiday: Thanksgiving; it’s all fall. So I don’t just like fall, I love fall. Turns out it’s not just me; many people love autumn. Last year during a meeting at work we got sidetracked and started talking about all the fun things we do during fall. Apple picking at the local farms and harvest-related endeavors, camping and everything nature seemed to be popular among many. Of course, I had to open my mouth and leave everyone speechless (except for some eye-rolling from my boss) when I said that I didn’t do any of that because fall was the best fashion season, so I only invested my time in activities that involved dressing up. Of course, after my comment we just went back to talk business.

There are many fun things I love doing during fall. I love hiking (both in nature and in the city) because not only the foliage is beautiful, but because the lighting itself is just ravishing and it makes everything look somewhat magical. So I walk and ride my bike to enjoy the sights, but also, I do it to prepare myself for all the eating I do throughout the season. I love fall food, especially everything squash. Since I grew up in Puerto Rico I wasn’t familiar with most squashes except for Caribbean squash (Calabaza) until quite recently, so I never had any pumpkin pie, roasted squashes or anything of the sort until I moved to the States 6 years ago. Now that’s what I call a crime against humanity (so Obama, if you are reading this, when you are done worrying about Syria, let’s make a plan to deliver pumpkin pies throughout Puerto Rico).  Since then I discovered the almost magical flavors of butternut squash, acorn squash, and many, many others. I’ve been hooked, and life has never been the same. So now, as soon as fall begins, the squash related dishes start making their appearances on our table as a beautiful countdown to that glorious day when the turkey is king.

I saw a simple, yet promising, recipe in Augusts' edition of Bon Appetit that I wanted to try. To me, it sounded like the perfect welcoming to fall, so I planned on waiting until the beginning of fall to try it. It was pork chops and squash with pumpkin seed vinaigrette, and just its name makes my mouth water every time I read it. It seemed delicious, and I was certain that it would be easy enough to be made as a weeknight dinner. The game was on.

I started by toasting pumpkin seeds (or pepitas) in the oven for the vinaigrette. I was surprised to see they were green since I used to buy them to eat as snacks when I lived in Puerto Rico and they always look whitish, the same as when you see them in any other pumpkin or squash. Oh well, I tasted them and they were great so I proceeded with my recipe. I toasted them using a rimmed baking sheet and removed them after a few minutes. They had a beautiful brown color, and an even better scent. 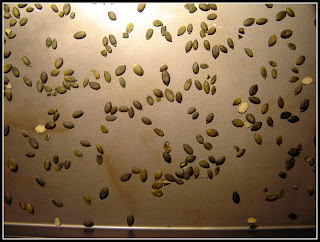 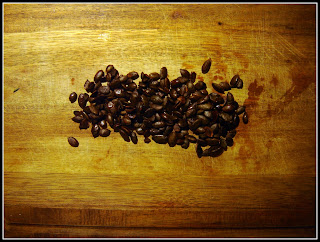 Next, I did the time consuming part of the recipe: roasting the squash. I used a little over 3 pounds of acorn squash, which were two medium sized acorn squashes. I halved them, seeded them and cut them into 1- inch wedges; I drizzled them with olive oil. I kept the flesh of the squash on because it’s edible (of course, if you don’t like it you don’t have to eat it). I reused the rimmed baking sheet to roast the squash and roasted them in the oven for 35 minutes. I turned them around twice during that period, making sure they were covered with the olive oil the whole time. I set up a timer for 20 minutes, so I would start prepping the pork chops then. 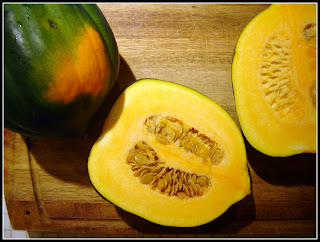 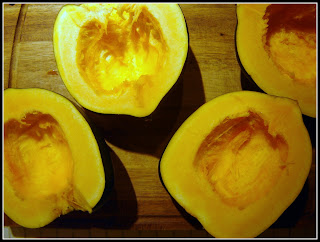 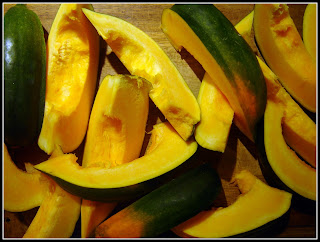 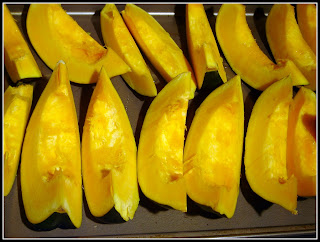 While the squash was in the oven I worked on my vinaigrette. I chopped the roasted pumpkin seeds, and transferred them to a small mixing bowl. I added olive oil, chopped cilantro, finely grated garlic and lime juice, and whisked them together. I added a pinch of salt and a pinch of pepper, and whisked again. My vinaigrette was ready. 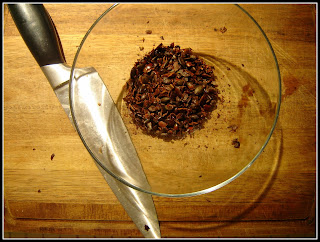 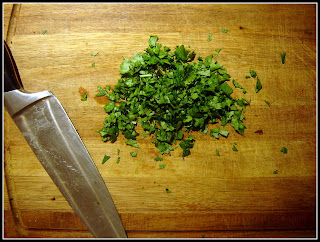 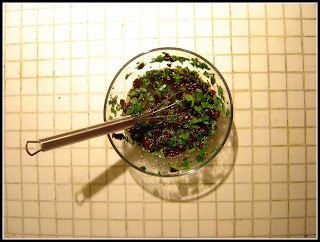 When the squash still had 15 minutes left in the oven, I seasoned my pork chops with kosher salt and freshly ground pepper. I heated a heavy skillet and when it was hot, I added the olive oil (that way the olive oil won’t burn). Almost immediately, I added the pork chops and cooked for five minutes. I flipped them and cooked for an additional 4 minutes. The color was beautiful and they were perfectly cooked, so I took them off the skillet. At this point my squash was also ready. The only thing left to do was plating. 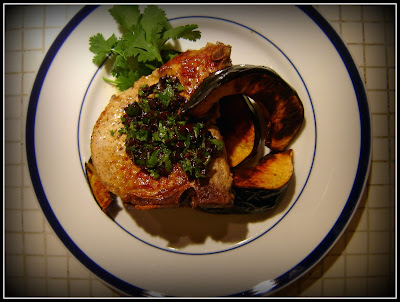 This recipe turned out really well. The vinaigrette was great, the flavors of the pork were fantastic, and the squash… well, it was perfect. It was such a nice dish. The best part is that we still had two chops left to eat the next day. We reheated them in the oven (covered in foil for 40 minutes at 350F) and they were even better then! Awesome! Nutrition-wise this was also a hit. The whole dish only has 470 calories per serving. That was a very generous portion for such a small amount of calories. There’s no trick with this recipe, but it’s quite a treat!
Enjoy your fall! 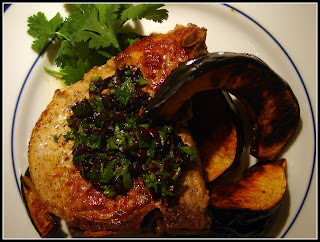