Beer-braised beer brats with peppers and onions, and quinoa 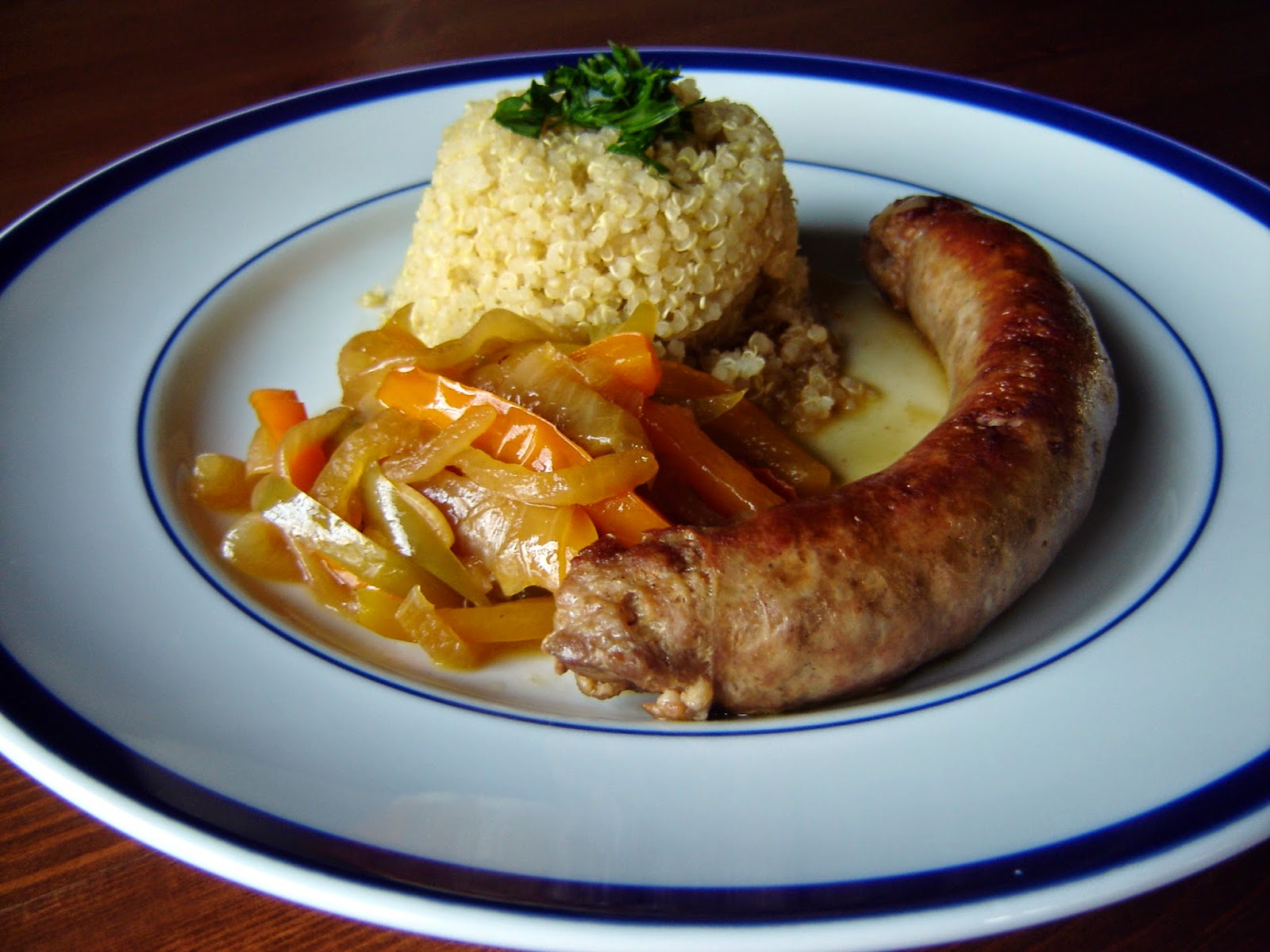 I really love watching Chopped on the Food Network. I never watch the new episodes per sé, but I love their Tuesday marathons. I let the show play while I run through the kitchen coming up with dinner; sometimes I even talk – interview style – making comments I storm through. I’ve timed myself a few times, and apparently I can get dinner out in 32 minutes, but not in 30. I can even make an appetizer and dinner, in 32 minutes. Whatever. Though busy, I can pay attention to the show too, which is how I’ve picked up the “it needs acid”, “it’s not balanced” and “overpowering” phrases. 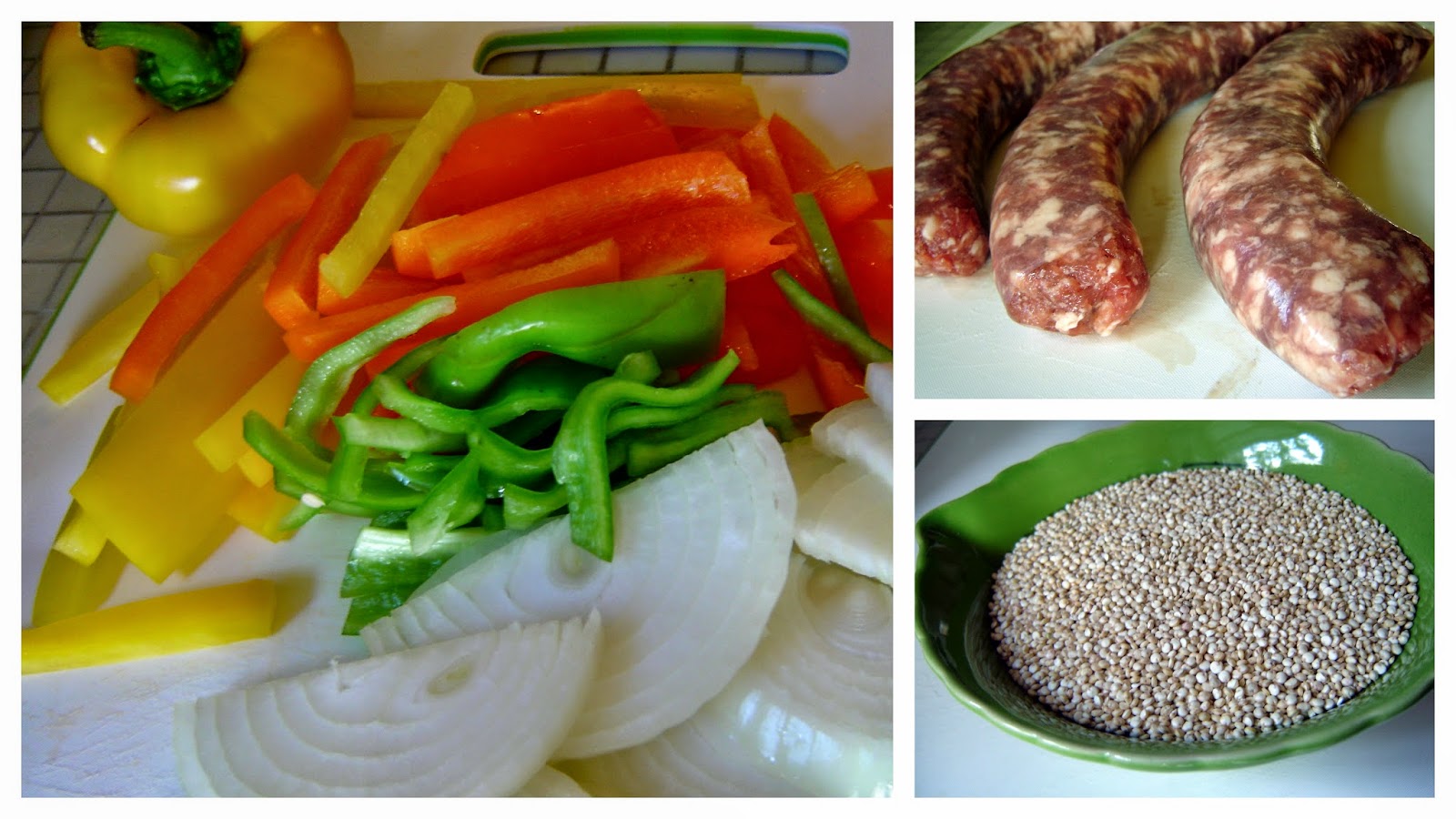 Of course, on Chopped the chefs cook using mystery ingredients but they can use anything they want from their fridge and pantry. Seems to me that one of the hottest items in that fridge is the mascarpone cheese. These people go nuts with it. They use it in ice creams, pastries, pastas, and virtually anything they can think of. Well, I’ve never used it before, so when I saw it in the store I talked myself into buying it (which believe it or not, takes some convincing). The next day, I started thinking about it, what should I do with it? I was busy, so I put it on the back burner, and couldn’t go back to it until I was lying in bed, just about to sleep. I came up with a few ideas, but I was snoring well before I could decide on them. Still, my brain was just not done; it refused to quit and kept working on it. I had this dream where someone from work broke into my lunch bag (at work), took MY CHEESE, and made some whipped cream with it and was ready to make ice cream as well. I’ve got to say that in my dreams, the kitchen at work is very well equipped… In real life, though, few things could look sadder. 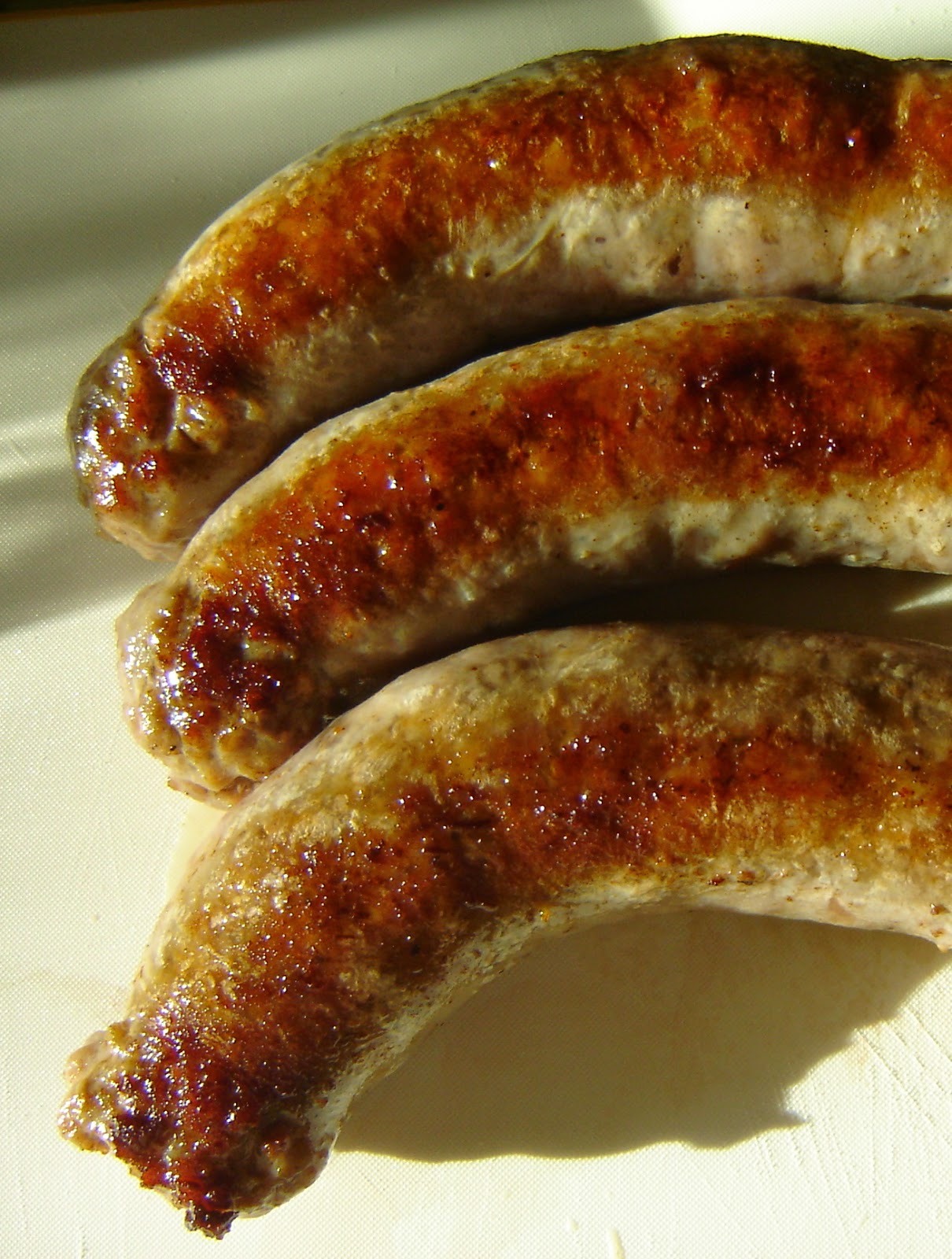 So I haven’t decided on what to do with the mascarpone yet, but it got me thinking of some of those Chopped-like experiences. I remembered I made for my parents Puerto Rican sausage (longaniza) with ajies (Puerto Rican sweet peppers), onion and sparkling cider, and served it next to the ever-present stewed rice. It really turned out amazing! It’s hard to replicate that recipe, not just because everything was eyeballed, but because the main ingredients are not easy to come by here in Cleveland. I can, of course, do my best to adapt it, and I did! I used beer brats instead of Puerto Rican sausage, and I used yellow, orange and cubanelle peppers to substitute for their local peppers. Finally, cider was substituted by beer, which gave the sausage a nice glaze, even if not as sweet as the original using cider. I served the sausages with quinoa, instead of rice, and I was very, very happy! 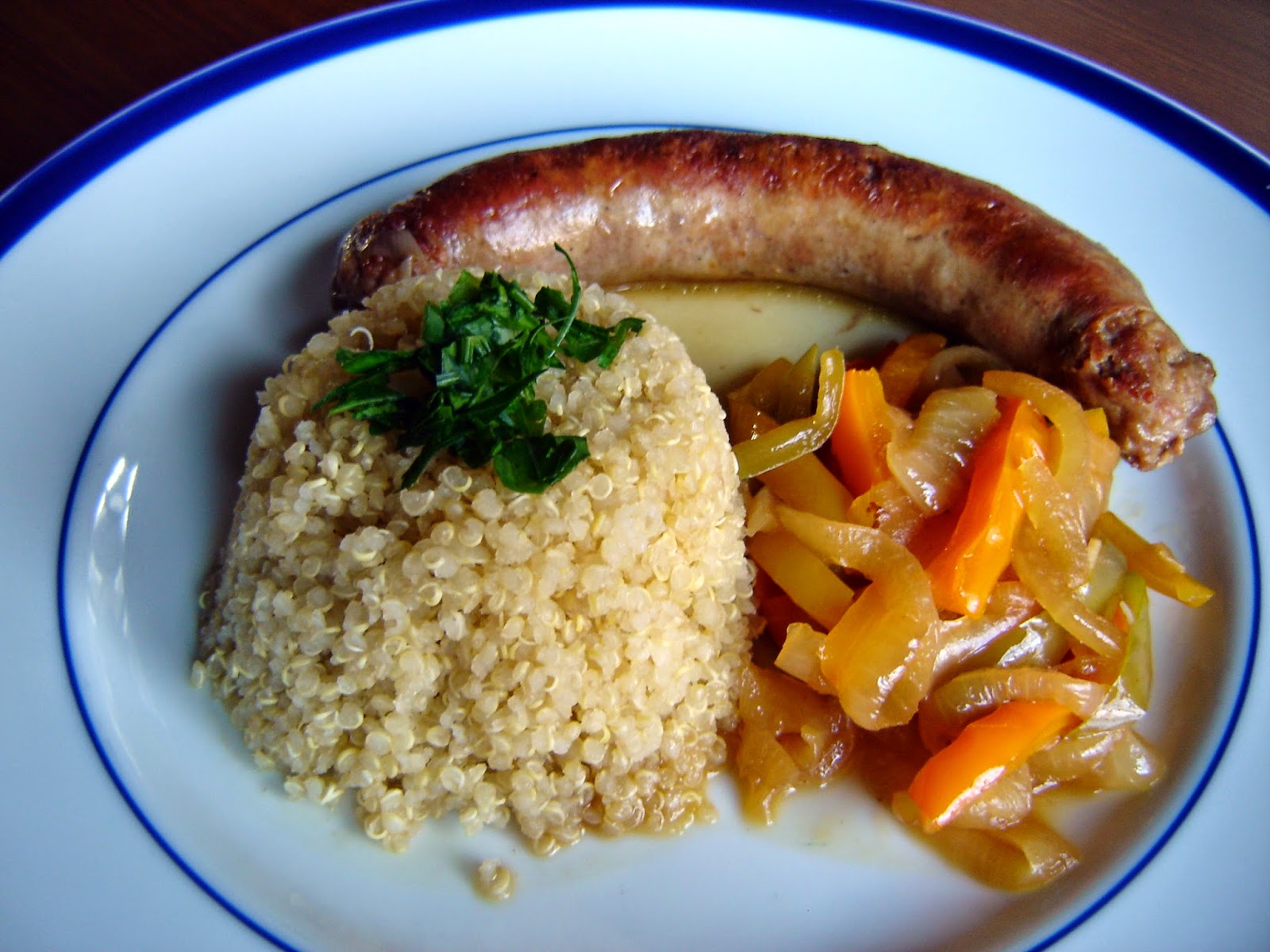 Most people recommend rinsing the quinoa. After rinsing it, combine the quinoa and chicken broth, and bring to a boil. Reduce the heat to low, and simmer covered until the liquid evaporates completely, and the quinoa is translucent, and sprouted (about 15-20 minutes). Fluff with a fork, and let it rest, covered for 5 minutes. When serving, top with the parsley if desired. 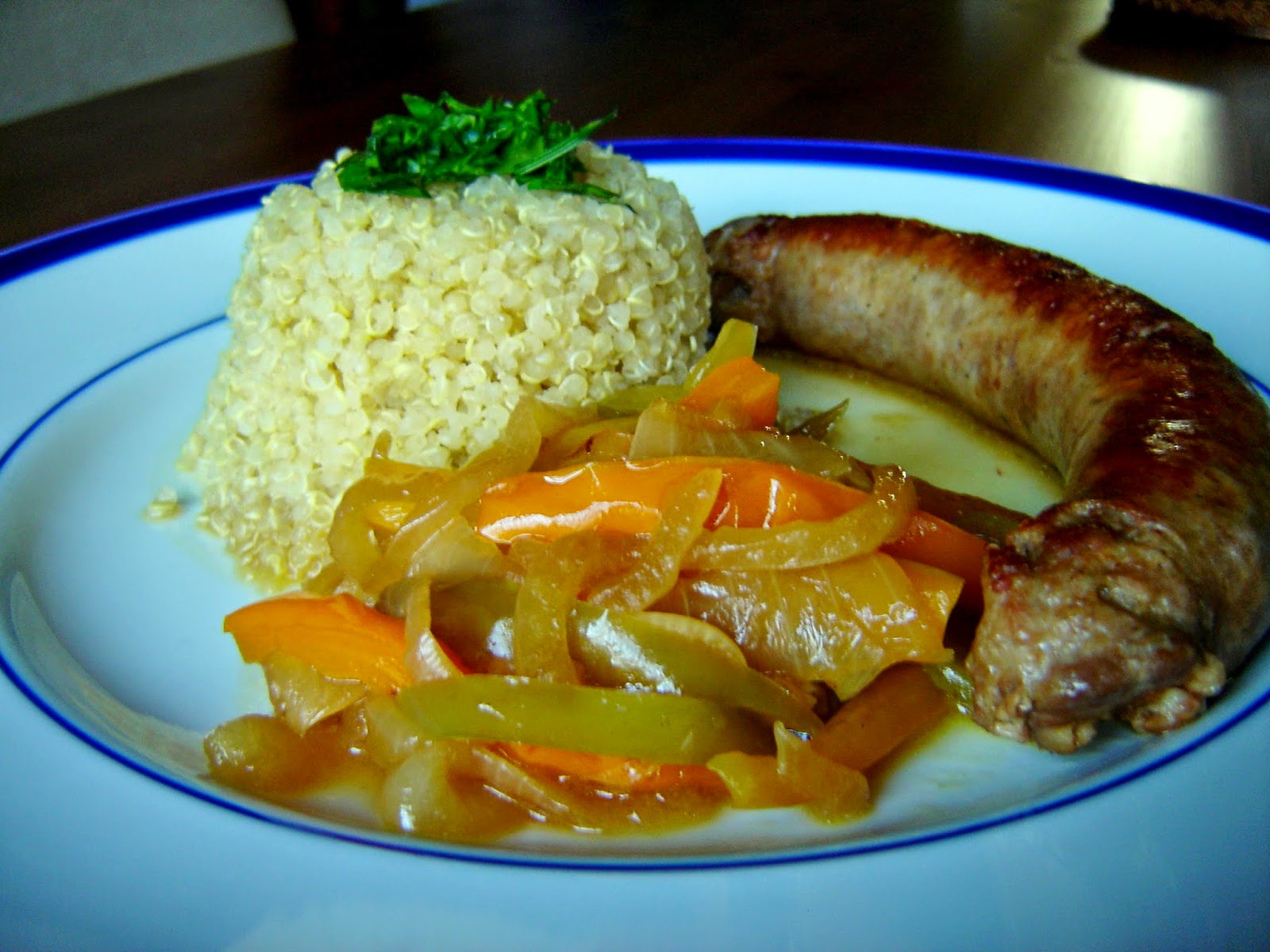 (Note: Pictures depict a sausage link that is 1.3 servings)

Sear the sausage for 10 minutes, rotating every 2-3 minutes. Remove them from the pan, but leave behind the rendered fat. Add the onions and peppers and sauté until bright and translucent (about 6-7 minutes). Add the garlic, cook for an additional minute. Add beer and salt (and optional black pepper). Bring to a boil, reduce the heat and simmer for 2-3 minutes. Add the sausage back, cover, and cook for about 20 minutes.

If desired, reduce the juices by removing the lid during the last 3 minutes or so, or cook a few minutes longer, uncovered, until the desired reduction.
Posted by Angel at 10:46 AM