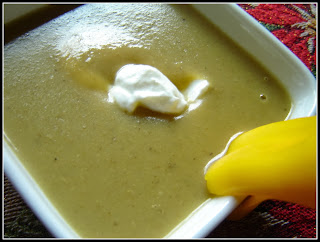 I can’t believe that Christmas-time is over. I feel like we had so much fun on Christmas and we built so much momentum as we approached it, that it’s kind of a bummer that it’s over. The house still looks Christmassy with all the decorations and the Christmas tree still looking beautiful. I can almost taste all the great food we had and the fun times we shared that day. But it’s over now. Well, is not really over just yet, since we still have New Years Eve and New Years Day to look forward to. And a New Year means we get new resolutions to work on for the next 365 days ahead of us. 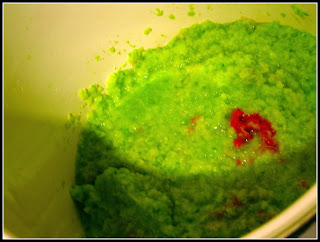 I’ve become pretty good at keeping my resolutions in the last few years. For 2012 I decided that I’ve had enough of my own whining, so my New Year’s resolution was to stop whining. Man that was hard. If you ever get to see me sick, or sleepy, you’d know what I mean. Still, the day-to-day whining was too much, and it had to go. I’d like to think that part of my weight loss success had to do with me not complaining about things as much, and working hard on them instead. For 2013, I had a different kind of resolution. I decided not to use elevators unless I absolutely had to. I’ve been good so far so I’ll count it as a success! I haven’t decided what my 2014 resolution will be just yet, but I’m sure I’ll find something. Self improvement never ends. 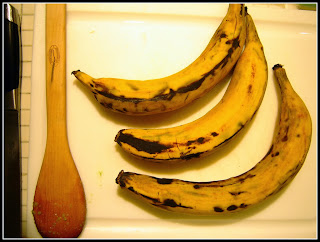 Of course, the holiday season was not just fun. It brought some stress, and it also brought some worries. As an example, my mother had surgery a few days before Christmas. I hear (since we don’t live in the same country) that she seems to be OK, and she’s constantly improving. The worst part of her recovery though, is dealing with the dietary restrictions imposed by her doctor. According to her, the instructions were that she can’t eat solid foods for a while. That means she struggles trying to keep her diabetes under control while following the unclear and somewhat generic advice her doctor gave her. 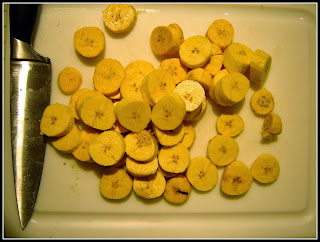 Even though her mother (my grandmother) could’ve easily (and happily) survived on soup alone, it’s not really my mom’s cup of tea (which she doesn’t like either). So I thought I could come up with a soup she would actually like, using only ingredients found in the Island*. OK, I did use some sour cream to garnish the soup (which makes it optional) even though it doesn’t really exist there (unless it was recently introduced and I’m just not aware of it). Plantains on the other hand are a ubiquitous in the Puerto Rican markets and supermarkets and are the core of my soup. They’ve been a staple ingredient of our cuisine since brought to the Island by the African slaves centuries ago. 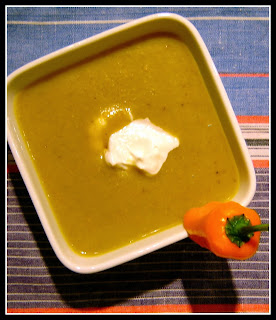 Although plantain soups are not really that common, there are a few recipes around, using mostly green plantains. Ripe plantains though, seemed more appealing to me. I guess it’s only natural since I’m obsessed with both sweet potato and butternut squash soups, and the ripe plantains bring those sweet notes I seem to be always longing for. The sweetness was balanced by hints of spiciness, and although a garnish, by the sour cream. Luscious and rich, but light on the calories; this soup has it all.

One last thing, before I forget: Happy New Year! Make it count! 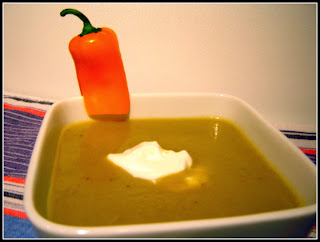 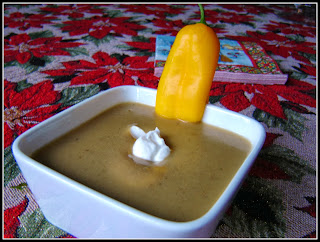 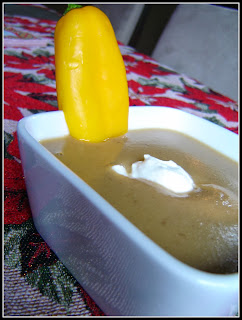 1.       Make the sofrito. Using a food processor or a blender, purée the onion, the pepper, and the garlic clove with 1 of the tablespoons of olive oil.
2.       Preheat a stockpot over medium heat and then add the remaining 2 tablespoons of olive oil. Add the sofrito and cook for 5 minutes. Add the tomato paste and cook for an additional minute.
3.       Add the previously-warmed chicken broth, the salt, paprika, cumin and cayenne pepper. Stir. Add the plantains and bring the soup to a boil.
4.       Once it starts boiling, cover the stockpot and lower the heat and simmer for 20 minutes.
5.       Using an immersion blender or transferring in 2 batches to a regular blender, purée the soup.
6.       Serve hot and garnish with a teaspoon of sour cream, and a small sweet pepper if desired. (Sour cream can be substituted with Greek yogurt).

*Note: I'm not a physician. This soup was designed based on my interpretation of what my mother may like. It is not intended to control her diabetes.
Posted by Angel at 12:00 PM