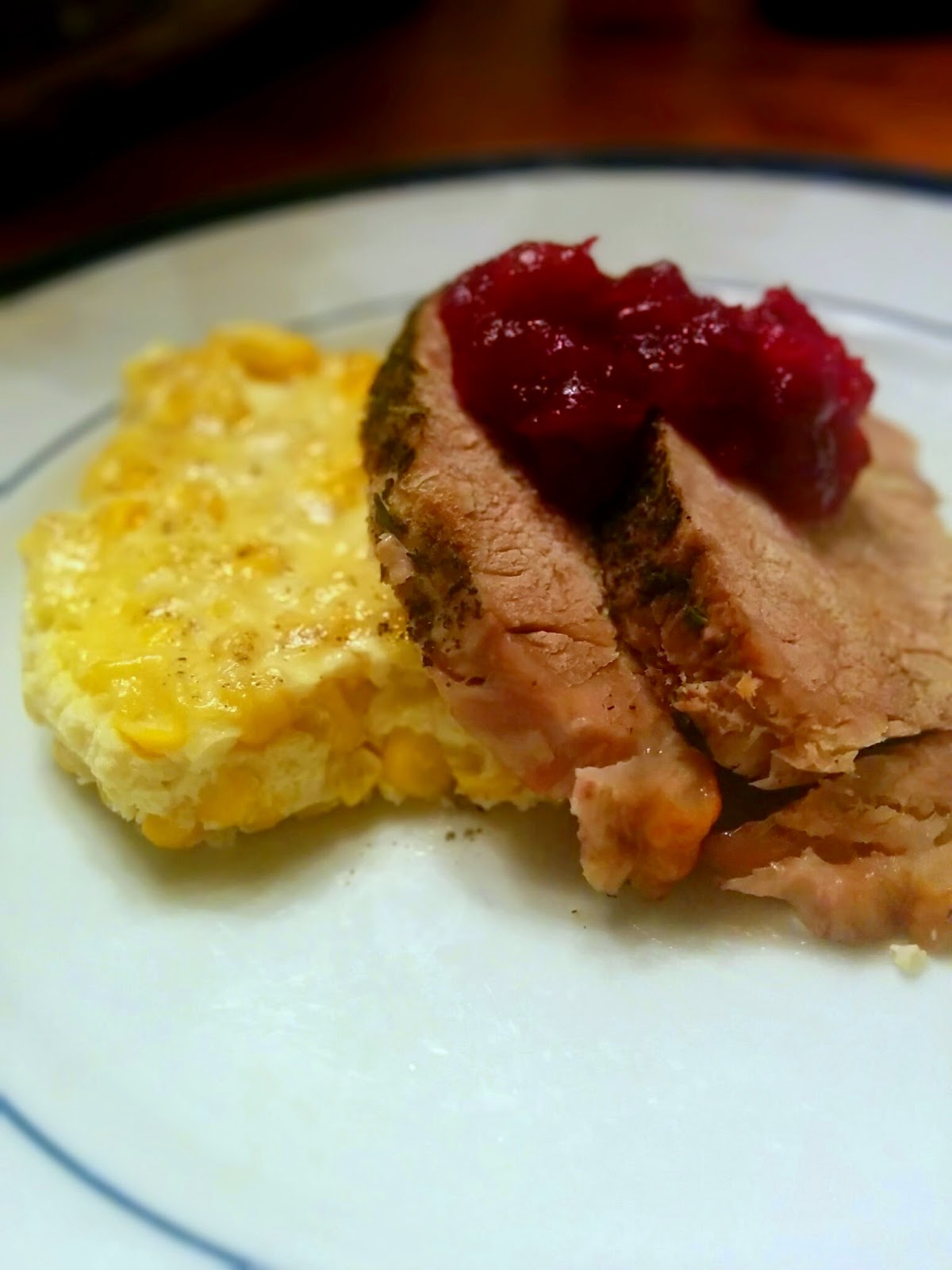 Years ago, as we browsed and browsed over the many, many recipes of the now defunct Gourmet Magazine, we came across this interesting editorial on a Pennsylvania Dutch Thanksgiving menu. Following the traditional Gourmet style, a very complete menu was laid out, with the time frames needed to accomplish all the prepping and all the cooking needed to pull this dinner off. We were having a party the weekend before Thanksgiving, so we decided to make everything on the menu minus the turkey.

Everything turned out perfectly, but I had a clear: a corn pudding made from toasted dry corn. This wonderful Native American way of preserving corn was adopted by some of the Pennsylvania Dutch, and when used for this pudding it deepens its flavor and gives it a great texture. Basically you have a milk/buttermilk custard on top, and then the corn sits at the bottom forming somewhat of a crunchy layer. Yumm. The only “problem” with the pudding was that the toasted corn is not wildly available in stores so we had to mail order it. And back then, we had no option but to buy a 12 pack even though we only needed 3 packages (to feed 24 people), but it turned out OK because we ended up making the pudding several times, and since then, a supermarket started carrying the toasted corn making it much more accessible.

So this weekend we decided to make the toasted corn pudding again for the BFs birthday party, a somewhat last minute decision. Against my better judgment, I went out to the supermarket to buy the toasted corn and some booze a mere 6 hours before the party. What should have been a 30 minute trip, turned into a 3 hour experience; it was chaotic out there. People were confused and behaved erratically both at the store and on the roads. It was hard, but I managed to keep my cool, even after spending almost an hour unsuccessfully trying to find the damn corn in the super market, and having to go to two additional stores to find the wine I was looking for. Augh. And since I wasted 3 hours on my corn and booze journey, we didn’t even have time to make a different corn pudding anymore. After all that drama, we ended up corn-pudding-less.


The rest of our menu turned out well, so I was happy. Still, I wanted my corn pudding. So two days after the party I made my own health-conscious corn pudding using the ingredients I already had. My goal this time was to cut some of the richness (read calories and fat) while keeping the pudding creamy. I used really tasty (and nutritious) frozen corn, and incorporated Greek yogurt into the batter to increase the protein content, and to balance the flavor. Oh, and since I’d been cleaning for days now, I wanted to keep the mess to a minimum. I mixed all the ingredients in a single bowl, and then transferred the mix into a buttered baking dish. 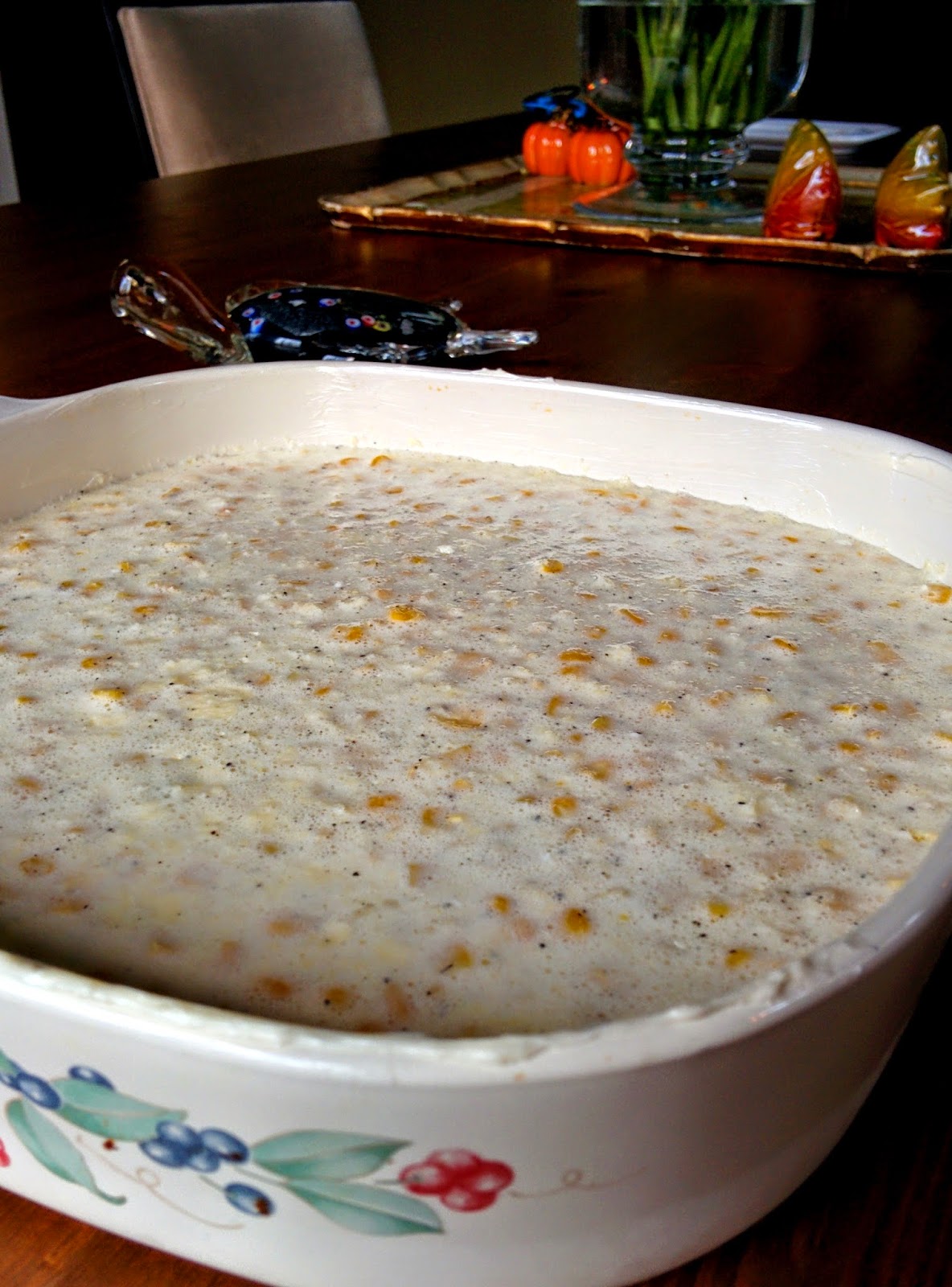 I baked my pudding for slightly over an hour, and let it cool for a few minutes. OMG, it was delicious. It was still creamy and it had a really nice texture from the corn. For the party, we roasted pork tenderloins stuffed with whole garlic cloves that turned out delicious, and had a wonderful aroma. We had so much of it, that we still had some leftovers, so I reheated it at low power (to prevent drying it) and served it with cranberry sauce (also from the party) next to my corn pudding. Again, OMG! They went so well together. And it turned out to be such a healthy meal as well. The pork tenderloin is high in protein, low on fat/calories, and my corn pudding was just 236 calories! I guess I was destined to have to make my own corn pudding recipe. I can make it anytime, with everyday ingredients and it will be good for me too! 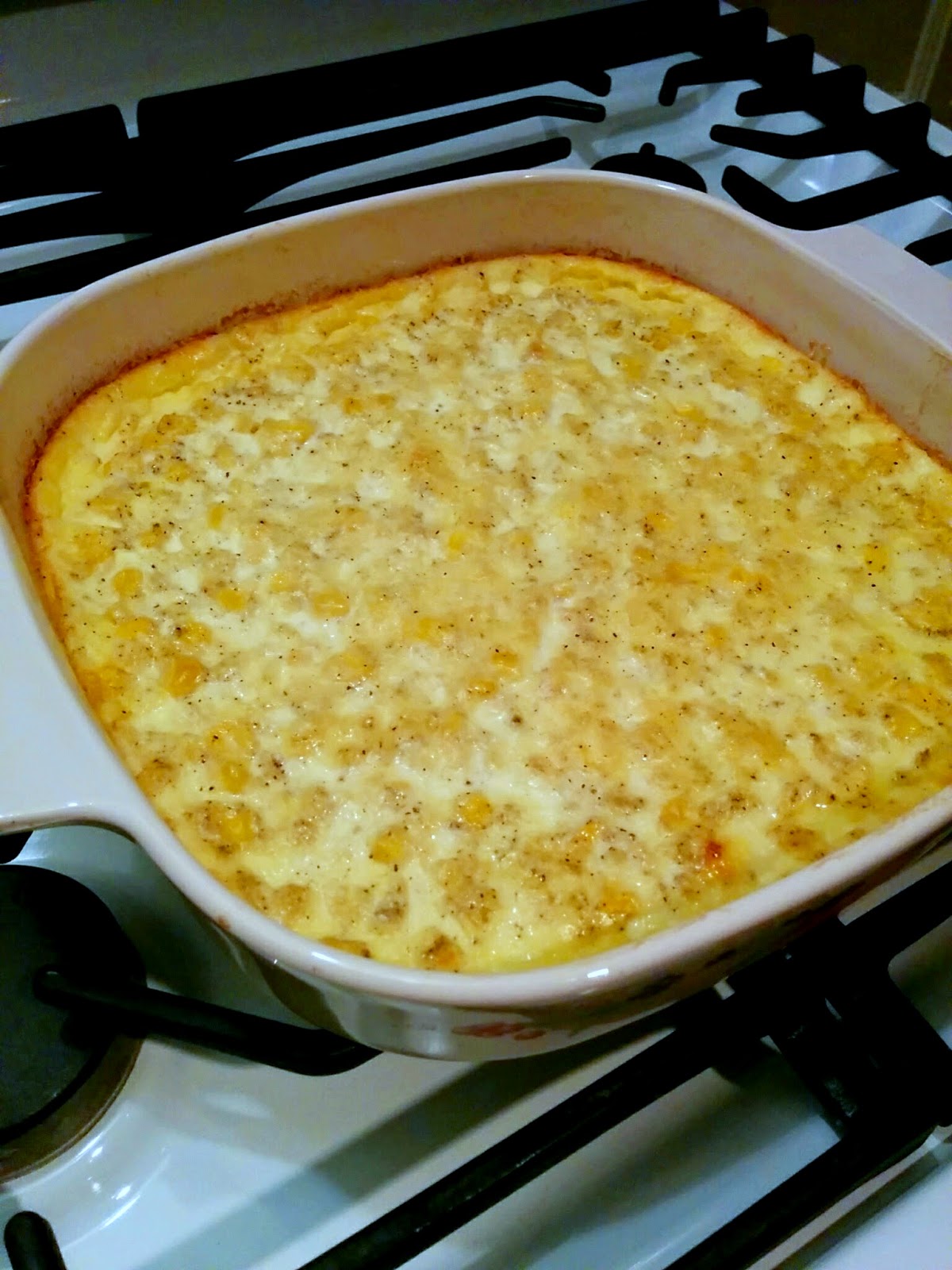 Preheat the oven to 350F. Butter a shallow baking dish.

Mix all the ingredients in a bowl. Transfer the mix into a buttered baking dish, and bake for 1hr and 15 minutes (or until it settles). Let it cool at least 10 minutes before serving.
Posted by Angel at 11:15 AM